The University of Georgia Hugh Hodgson School of Music launches its spring Faculty Artist Series of recitals with “Levon and Friends.” 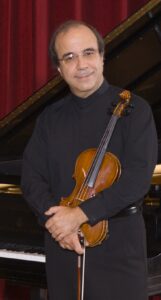 Levon Ambartsumian will be joined by his UGA colleagues Anatoly Sheludyakov and Evgeny Rivkin, piano; Shakhida Azimkhodjaeva, viola; and David Starkweather, cello. Together, they will play an evening of music featuring Schubert, Schumann and Brahms.

Ambartsumian is Franklin Professor of Violin. Prior to coming to UGA in 1995, he was a visiting professor at Indiana University School of Music, replacing legendary American violin teacher Joseph Gingold. He also taught at the Moscow Tchaikovsky Conservatory in 1978, where he taught for 15 years.

Ambartsumian is an alumnus of the Moscow Central Music School and the Moscow Tchaikovsky Conservatory, where his teachers were Felix Andrievski, Yury Yankelevitch, Leonid Kogan and Igor Bezrodny. In 1977, he became the first prize winner of Zagreb International Violin Competition headed by Henryk Szeryng. Two years later, he was a prize winner of the Montreal International Competition, and in 1981, he won the All-Union Violin Competition in Riga.

In 1990, Ambartsumian founded the Moscow Chamber Orchestra ARCO, which regularly performed in Russia and abroad and now resides in Athens, Georgia. Since its creation, Ambartsumian has led UGA’s ARCO Chamber Orchestra, commercially releasing 15 CDs and has performed four times in Carnegie Hall’s Weill Recital Hall. In 2011, ARCO was invited to perform at La Fenice, the world famous Opera House in Venice, Italy.

About the Faculty Artist Series

Throughout each academic year, faculty present recitals as part of the Faculty Artist Series. Not only does this give them a chance to share and celebrate their artistry with the UGA and Athens community, but it’s also an opportunity for their students to see what they’ve been learning “in practice” as their instructors demonstrate the craft involved for a working professional in the music industry.