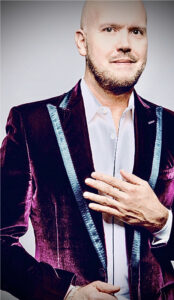 The Hugh Hodgson School of Music Faculty Artist Series continues with piano aficionado and resident accompanist Damon Denton performing Nov. 9 at 7:30 p.m. in Ramsey Hall as part of the Spotlight on the Arts festival.

The program will feature music from France in tribute to his lineage, being half French on his mother’s side. The program includes three short works by Mompou, Ravel’s “Jeux d’eau,” Boulanger’s “Three Pieces for Viola and Piano,” Chopin’s “Nocturne in D Flat Major,” with Chopin’s “Andante Spianato and Grand Polonaise” closing the concert. Maggie Snyder, professor of viola, will join Denton on the Boulanger composition.

Denton was a top prize winner at the Fourth International Piano Competition held in Pretoria, South Africa, and is one of two faculty collaborative pianists at the Hodgson School—a role he has been in since 2010. He received his Bachelor of Music degree from the Peabody Institute of Johns Hopkins University and his Master of Music degree from the Juilliard School studying with Russian pianist Oxana Yablonskaya.

During his career, Denton has performed concerts in England, Ireland, Mexico, Germany, South Africa and throughout the United States. Beyond his classical projects, Damon has toured as keyboardist for the Athens-based alternative band Pylon Reenactment Society. PRS is fronted by Pylon’s original singer, Vanessa Briscoe Hay, who was named one of the 25 best rock front women of all time by Paste Magazine.

Tickets to the concert are $12 for adults and $3 for students with a valid ID and can be purchased through the Performing Arts Center Box Office online, by calling 706-542-4400 or in person before the event. Live streaming will be available at https://www.music.uga.edu/live-streaming. If joining in person, the Hodgson School strongly encourages patrons to wear a mask inside the halls and public spaces.