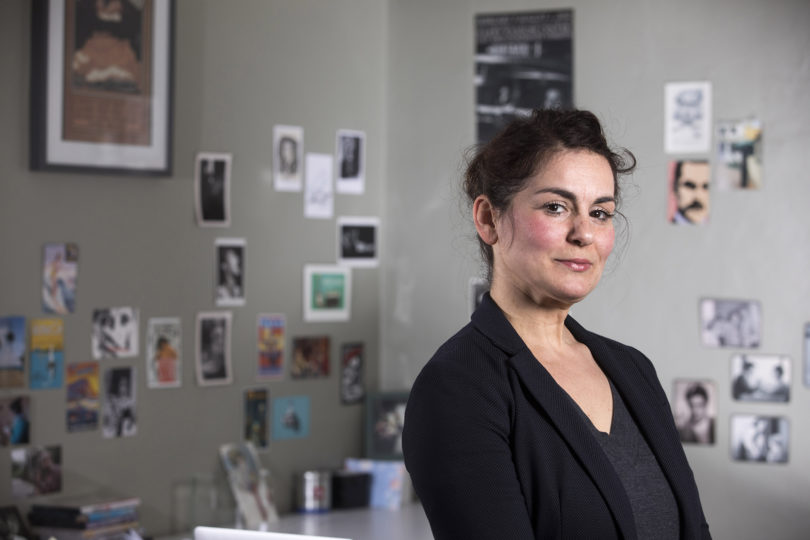 Berna Gueneli, associate professor of German in the Franklin College of Arts and Sciences, has a love for the college environment. (Photo by Dorothy Kozlowski/UGA) 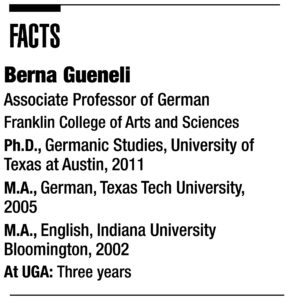 Her own early travels as a student thinking about a career in medicine and her internships as a journalist led her to rich experiences and built a passion for sharing modern languages and culture.

“Even becoming a German professor was a reaction to my love for the college environment,” Gueneli said.

With a first degree in Spanish and English covering a broad spectrum of literature and culture, and preparing her inquiry on post-9/11 journalism, the need for further research took her to Texas Tech for graduate school.

Part of that fruitful period included organizing a film series with other graduate colleagues and a decision to show a film by the Turkish German filmmaker Fatih Akin.

“We showed that film, and the students were fascinated. I decided this was something I should look more into: minority cinema in Germany, minority cinema in Europe, and how it had been represented so far,” Gueneli said.“ It was always very cliché and stereotypical; but this filmmaker was different. He was just telling stories. He would give us a compelling narrative, with intriguing characters, people compared him to Scorsese, to Fassbinder. He was more nuanced and complex, I thought.”

Gueneli would later write her first book, published with Indiana UP in 2019, on Akin.

She pursued a doctorate at the University of Texas in German studies with an emphasis in film with renowned cinema scholar Sabine Hake.

“The Akin book is about the oeuvre of one particular director in the context of German and European film after the Cold War,” Gueneli said. “I analyze one director to look at the broader phenomenon of transnationalism in German cinema.”

An even broader vision, her new research is focused toward orientalist visual media.

“It will look at the entire 20th century, film and cinema, but contextualized in the more expansive realm of visual media including photography, magazines, illustrated press, advertisements using orientalist imagery,” she said.

“Of course, all these media influence each other, reacting to our tastes and to sociopolitical contexts of colonialism, post-colonialism and the fears, fascinations and anxieties that were developed and formed toward people, mainly of northern Africa and the former Ottoman empire, Modern Turkey, but also some parts of the Soviet Union,” she also said.

The breadth of the project exemplifies Gueneli’s approach to teaching and how she brings contemporary cinema into the classroom.

“Most of my classes are not strictly on film or literature. They are a combination of various media, often with a thematic focus,” she said. “I try to bring in already established canonical voices, like a text by Thomas Mann or Günter Grass, but in the same class, I might also have equally important work by Afro-German artists such as poet May Ayim or filmmaker Amelia Umuhire, as well as work by Turkish-German filmmakers like Ilker Çatak. Such classes create a juxtaposition of multiple voices in the art world—whether literature, film or music—to produce a diversification of German studies.”

In this vein, Gueneli also regularly brings scholars and artists to Athens in the hope of starting a conversation on diversity across campus. In March, she will screen Oray at Ciné with the Turkish-German director Mehmet Büyükataly in attendance, and in October she will host Nigerian-German filmmaker and actress Sheri Hagen at UGA.

Germanic and Slavic studies courses are primarily in German, but Gueneli also teaches a survey course in English for majors and nonmajors on 20th-century German culture.

“The cultural studies course touches the history and the sociopolitical changes that took place over the turbulent 20th century in Germany, but using the arts to decipher people’s attitudes to certain changes,” she said.

It’s a compelling method for developing a critical sensibility in students that has a lot in common with how Gueneli herself developed from student to teacher.

“I love the college environment and the ways we share the power of learning,” she said. “Sometimes I tell my students that I still see myself as being on a study abroad, I just never ended it. Now it’s just a professional version. I’m working here as a German professor, but I am a German still, so I’ll just continue the study abroad section of my life until I retire.”