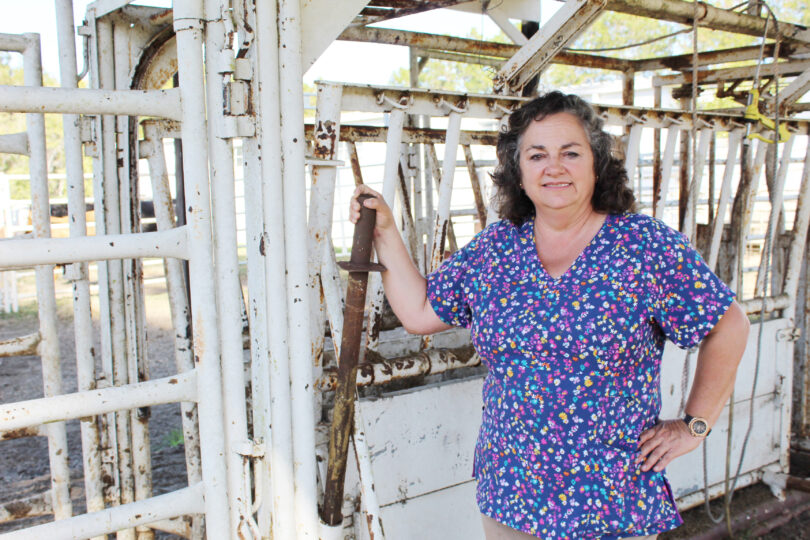 Angie McDaniel is a clinical associate professor in the College of Veterinary Medicine at the Tifton Diagnostic and Investigational Laboratory. (Photo by Amy H. Carter)

Angie McDaniel shares her love of large animals with others

Angie McDaniel is a product of one of the most revolutionary centuries in history.

For starters, she grew up on a farm in Irwin County in south Georgia and learned from her grandfather how to care for farm animals. Industrialization and technology have so thoroughly shifted the balance of population and power from country to city that a farm background is now the exception rather than the rule.

And then there’s her occupation: McDaniel is a veterinarian specializing in food animal (large animal) medicine.

According to research by Louisiana State University, there were just 21 female veterinarian graduates in the United States in 1938. Ten more women joined their ranks in 1939. Approximately 5,000 male veterinarians belonged to the American Veterinary Medical Association in 1939.

In 2009, the AVMA reported that female veterinarians outnumbered their male counterparts for the first time.

McDaniel joined the faculty of UGA’s College of Veterinary Medicine in November 2021, serving as a clinical associate professor at the Tifton Diagnostic and Investigational Laboratory. She worked for 24 years in a mixed animal practice in Tifton and applied at UGA when that practice shifted focus to specialize in small animals exclusively.

Like the nation, south Georgia is seeing a decline in large animal specialists. When her practice stopped taking large animals, McDaniel started splitting her time between the clinic four days per week and her own large animal service one day per week.

“The problem is that cattle and goats and sheep don’t look at a calendar, and a lot of times they wouldn’t get sick on that one day I worked, so I ended up working for the clinic until 6 p.m. every night, and I would go on one or two farm calls at night and do a good bit on weekends just to keep up with it. I knew I needed to change, and this position came open, and I applied, and I got really lucky and got it so now I can focus strictly on large animals.”

McDaniel and veterinarian Dr. Lee Jones help to bridge the service gap for livestock and equine owners in Tift and surrounding counties. They receive patients in a new livestock hauling facility on the grounds of the Tifton vet lab and make house calls.

“I have a service appointment, a teaching appointment and a tiny research appointment. Most of my time is service, and service includes seeing animals just like a normal veterinarian. Food animals and equine, no dogs or cats. On a typical day, I’m doing a lot of clinical work, meaning people bring their animals to me, and I’ll do routine procedures, like for horses we’ll do teeth floats, we’ll do vaccines. I castrate stallions,” McDaniel said.

She also helps cattle producers maintain the health of their herds.

“I’ll go to the farm and set up vaccine protocols and things like that for them,” she said. “We’ll talk to them about nutrition management, different breeding protocols they can use, preferably get clients on a breeding program where they may calve only three to six months out of the year.” 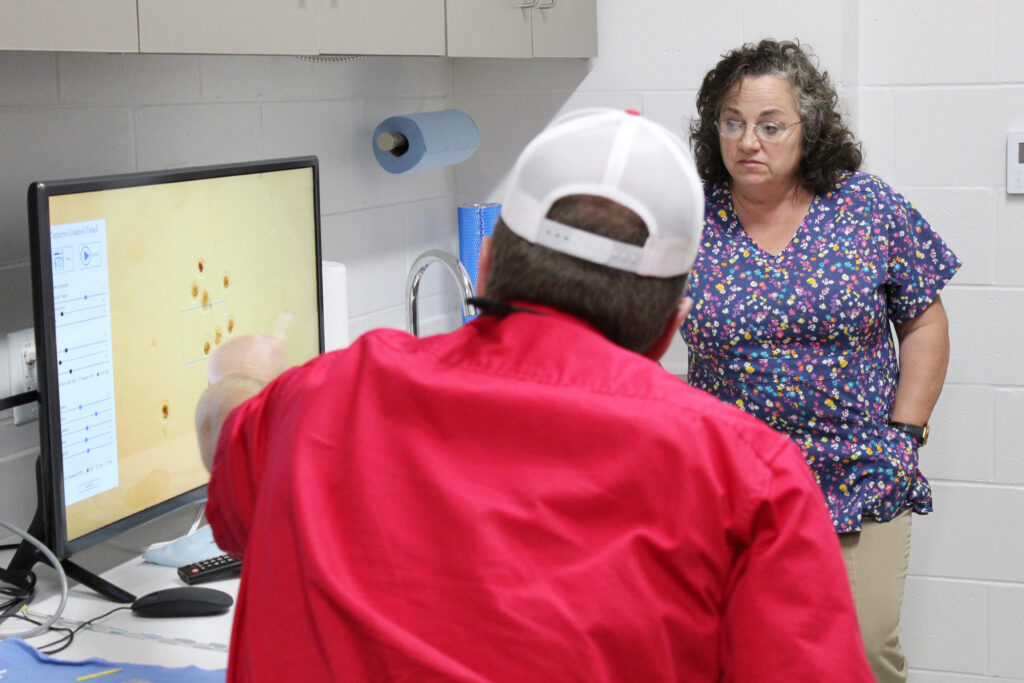 Angie McDaniel, right, clinical associate professor in the College of Veterinary Medicine at the Tifton Diagnostic and Investigational Laboratory, continues to learn about embryo transfer and artificial insemination via laparoscopy in sheep and goats. (Photo by Amy H. Carter)

McDaniel and Jones also see sick animals. Mainly that entails small ruminants with parasite issues, but the pair also deliver calves and goats on occasion. A lifelong horsewoman, McDaniel is an expert in equine health and said 95% of foals are born without problems.

“The 5% that aren’t are a real problem,” she said. “A lot of times if you can’t pull a foal quick you end up having to send them to (the veterinary hospital in) Athens or to a referral service because a lot of those animals will end up having C-sections.”

Jones is a specialist in large animal reproduction and is teaching McDaniel about embryo transfer and artificial insemination via laparoscopy in sheep and goats.

“Basically, what it all boils down to is we’re keeping our food supply safe, and we’re teaching people how to handle these animals in the best possible manner, how to decrease the use of antibiotics by keeping the animals healthy,” McDaniel said. “Everybody is interested in how animals are handled, so we do beef quality assurance to make sure that everything is properly done and the meat is safe. Beef quality assurance also has a big component of animal behavior in it in that animals are treated humanely from birth to plate.”

However, she’s not just teaching producers. Another component of McDaniel’s work is teaching students, and she fulfills it not only with UGA students who serve internships and do clinical rotations at the Tifton vet lab, but also students enrolled at the Abraham Baldwin Agricultural College in Tifton.

The UGA Tifton Lab and ABAC received a grant from the U.S. Department of Agriculture/National Institute of Food and Agriculture nearly two years ago that is used to fund daylong workshops at the lab for ABAC students interested in careers in veterinary medicine.

“The majority of our ABAC students are from rural areas of the state, and we saw that they were not as successful at being accepted into vet school as their urban counterparts because they had not had access to different opportunities found more commonly in larger cities of the state,” said Jenny Harper, a biology professor at ABAC.

Nearly 100 students have participated in daylong workshops at the lab where various department heads like McDaniel and Jones introduce them to the many career paths available in veterinary medicine. Harper said most of the ABAC students participating in programs offered at the vet lab are female, and “Dr. Angie,” as they call her, is an inspiration to them.

“Upon meeting Dr. Angie, many of these young women immediately feel at ease in her presence and gravitate towards her quick wit and fascinating stories. She has quickly become a role model for the ABAC students and sets a unique example as a female veterinarian working with large animals in an area usually dominated by men,” Harper said. “Our ABAC students look up to her and see that their goals of becoming a large animal vet is very possible.”