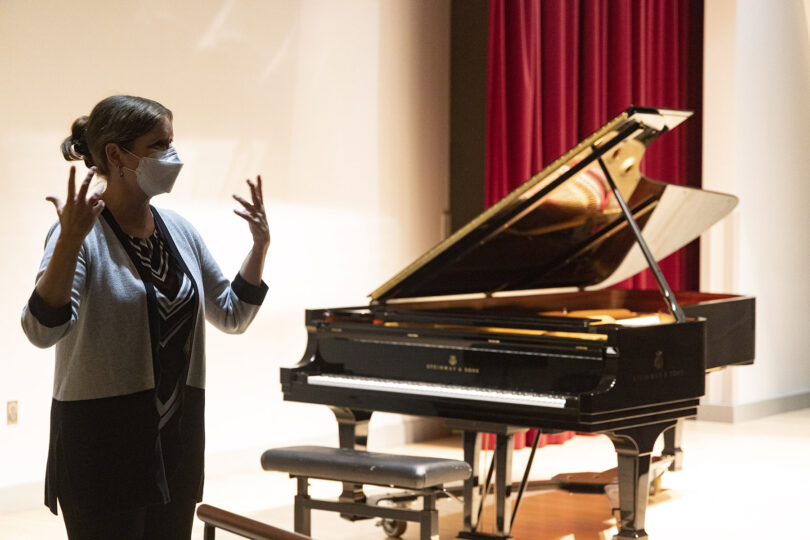 Since joining the Hugh Hodgson School of Music as an associate professor of piano, Liza Stepanova has created new courses and promoted initiatives that go beyond that role. (Photo by Dorothy Kozlowski/UGA)

Liza Stepanova, associate professor of piano in the Hugh Hodgson School of Music, believes music transcends barriers and teaches her students the importance of collaboration and community outreach.

Stepanova came to UGA in 2015 primarily to teach applied piano to a studio of undergraduate and graduate piano majors. Since joining the faculty, she has created new courses and promoted initiatives that go beyond this role. One of them has been the production of the new Chamber Music Athens festival designed to increase interest in chamber and collaboration between students, faculty and visiting performers.

“Chamber music is about collaboration, it is about give-and-take, conversation, listening, openness and humility—all skills that are so important to us as musicians but also as people. Growing up, I had a chance to work with a number of world-class chamber musicians in school and at festivals, and this experience has forever stayed with me,” said Stepanova. “I wanted to bring that to my UGA students. I was inspired by the idea of multiple generations of faculty, world-class guest artists and students playing and learning together, and this is what Chamber Music Athens is about.”

The next Chamber Music Athens Festival will take place May 15-22.

In addition to her responsibilities teaching her piano students, Stepanova also teaches the importance of using music to reach out to the community.

“Pre-COVID, my students were regularly out in the community, visiting retirement homes and playing music,” said Stepanova. “It reminds us of the power of what it is all about. It is easy to get bogged down in the class and when the jury is, but there is a reason why music is important. It is a language everyone can share.”

In the fall semester of 2020, Stepanova introduced a new course titled “Community Engagement for Performers.” This course was all about students leaving campus to get out into the community and make connections. With the onset of the COVID-19 pandemic, Stepanova had to make a few changes to how the course would operate. The students had to get creative with their outreach and focused on projects ranging from virtual concerts for isolated patients to curated videos introducing classical music to toddlers.

“I brought in guest speakers to share what they were doing, and thought was possible even with the pandemic happening around us,” said Stepanova. “By the end of the class, UGA students reached day cares, public schools, COVID patients, the elderly and international students. I’m really proud of what my students accomplished despite the challenges.” 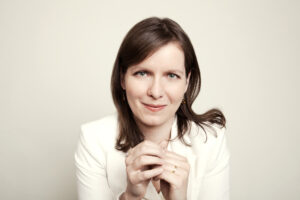 Stepanova’s inspiration for her most recent album, “E Pluribus Unum,” released in fall 2020, also came from a student. After releasing “Tones and Colors” (CAG Records, 2018), dedicated to intersections between musical and visual arts, she was looking for a new project when a graduating student’s parents were unable to attend his recital due to the first round of travel restrictions implemented in 2017.

“We all like to see students and their parents at graduation and their recitals. This situation was heartbreaking to witness,” said Stepanova. “I tried to think of a way to support the student. He was a talented composer in addition to being my piano student, so I commissioned him for a piece. I then started thinking about what the larger theme around this piece and this event is, and the theme was immigration.”

Stepanova began researching and finding pieces and composers that spoke to her and her larger theme of immigration. Her student’s work became the centerpiece for a new recital program she debuted at the San Francisco Center for New Music and of “E Pluribus Unum.”

This project found significant resonance in the U.S. and abroad garnering positive reviews in all major classical music magazines in the UK (BBC Music Magazine, International Piano, Gramophone) and prompting Stepanova’s distinction as New Artist of the Month by Musical America Worldwide.

“I often have a researcher’s mindset as a performer. Ideas pique my curiosity, and I follow them down the rabbit hole,” said Stepanova.

Stepanova is also a member of the Lysander Trio, formed at The Juilliard School in 2009. The trio has spent more than a decade performing around the U.S. with appearances at notable venues including two recitals at Carnegie Hall Weill Recital Hall, at the Kennedy Center’s Terrace Theater, multiple appearances at Spivey Hall in Atlanta, at the Krannert Center of the University of Illinois, Chicago’s Myra Hess series, the Kravis Center in West Palm Beach, across the West Coast, in Alaska, as well as abroad in Israel and Denmark.

Stepanova holds degrees from the “Hanns Eisler” Academy in Berlin, Germany (BM) and The Juilliard School (MM, DMA) where she studied with Joseph Kalichstein, Seymour Lipkin, Jerome Lowenthal and George Sava. Before her teaching at UGA, she taught a variety of undergraduate and graduate classes at The Juilliard School from 2011-2015. Additionally, she was the Iva Dee Hiatt Visiting Artist at Smith College for two years where she taught an applied studio and curated special projects and concerts on campus.