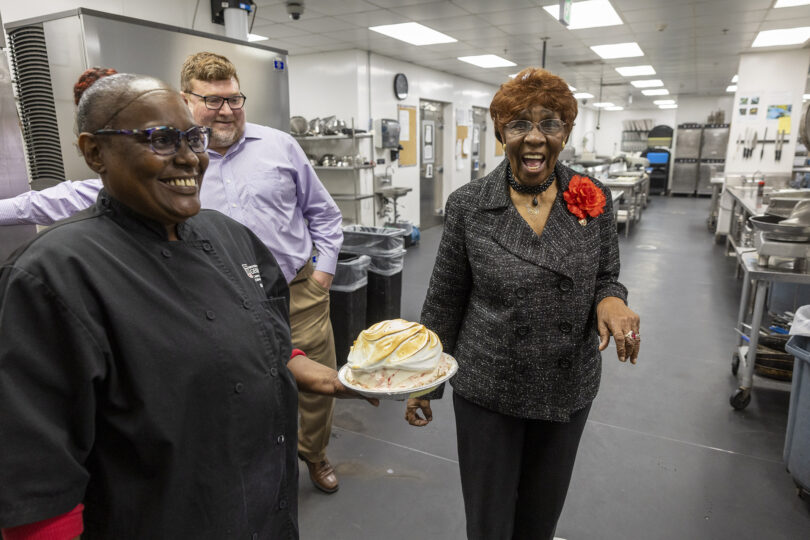 When Luetrell Sims began working as a baker at the University of Georgia’s Savannah Room in 1963, the strawberry ice cream pie was already being made, but hadn’t yet become a “famous” dessert that drew people to Athens from across the state and beyond. 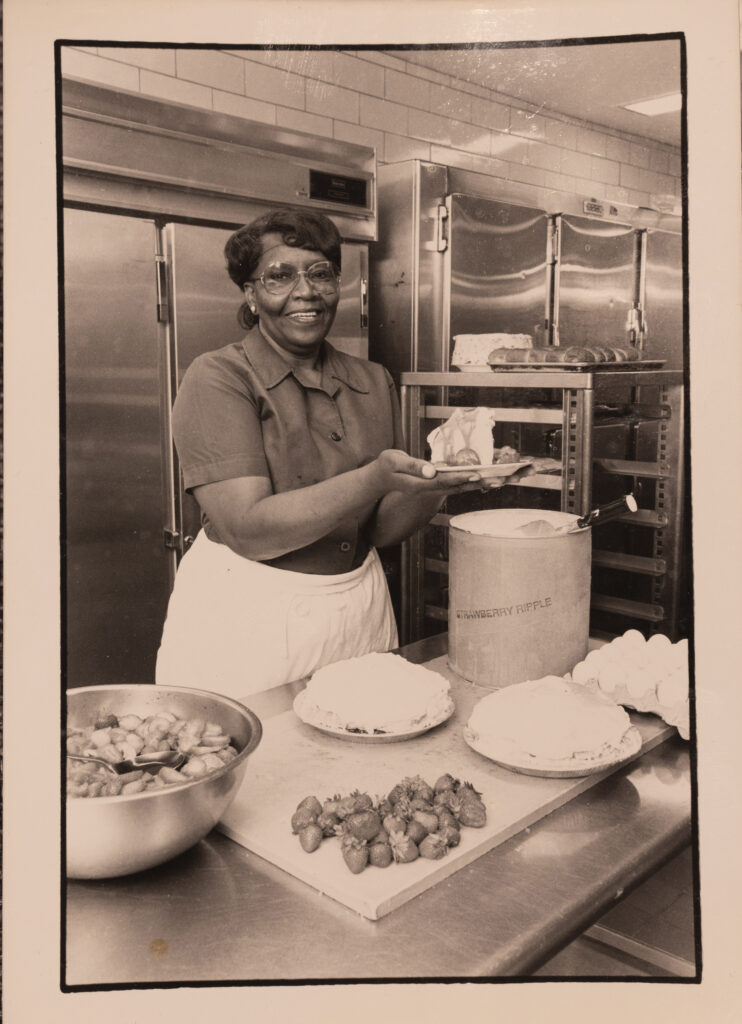 Sims helped create that draw by perfecting the pie. “We had people come in from North Carolina and Atlanta, and if we didn’t have that pie, we were in trouble!” Sims recalled.

The main problem with the pie was that the crust stuck to the pan. Sims explained that she and her supervisor at the time created a non-stick spray so the crust wouldn’t adhere to the pan, then made a double knife to provide leverage for the person cutting the pie.

“You really had to put your weight on that double knife,” Sims said, adding, “I was told I made the pie better by adding those finishing touches.”

(L-R) Kelly Cramer and Myra Francis, both current bakers at the Georgia Center for Continuing Education & Hotel, and Luetrell Sims talk about changes to the kitchen since her time as a baker there. (Photo by Peter Frey/UGA)

Today, the Savannah Room, the main restaurant in the UGA Center for Continuing Education & Hotel, typically sells 150 slices or more of the strawberry ice cream pie during a busy month.

In December, Sims, who retired in 1999, joined her two daughters, granddaughter, niece, the Savannah Room’s executive chef, current UGA bakers and a few others to enjoy lunch, reminisce over her time working for UGA and to finally eat a slice of her own famous pie, which she never tried during her long tenure as a baker.

“As long as I made it, I never ate it,” Sims said, with a laugh. “All I was interested in was if you could take it out of that pan without the crust staying in. That was my main concern.” 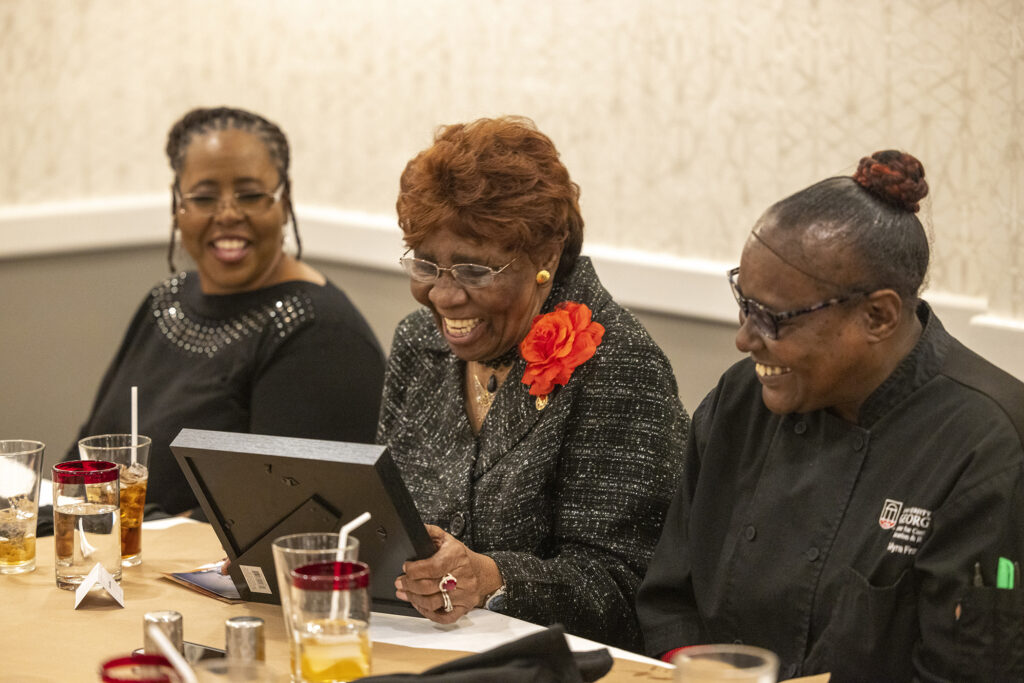 That same double knife technique is still used today. Kelly Cramer, who currently bakes the pie, said, “You still have to put your weight on that knife and rock it back and forth.” (Cramer had only made three pies on that slow December day close to Christmas break, which earned her a light scolding from Sims who said she made 30 on a daily basis during her tenure.)

Myra Francis, another baker who was taught by Cramer how to make the pie, added, “I still can’t get the ice cream dome down right, but I do know how to put it together.” 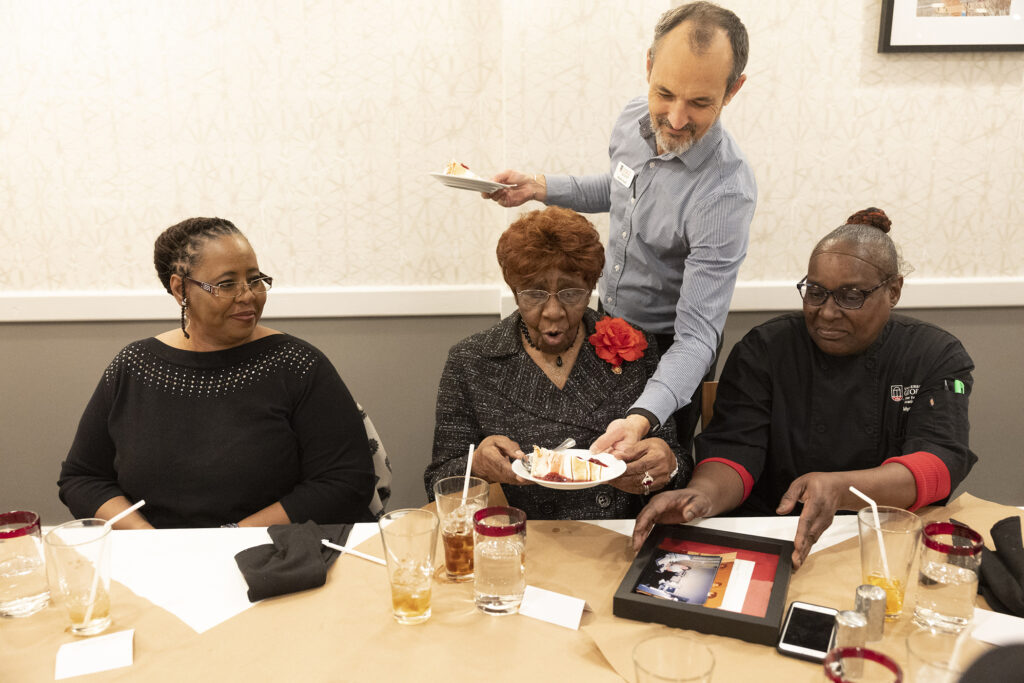 “When I started at O House, there were two older ladies who didn’t think I could bake. I called my momma and she said ‘You tell them that you came out of the womb baking,’” Quinetta said.

The strawberry ice cream pie was first made at UGA in the early 1960s after the Savannah Room accidentally ordered too much coconut – 600 pounds instead of 60. A chef found a recipe with a macaroon coconut crust and started making the pies. 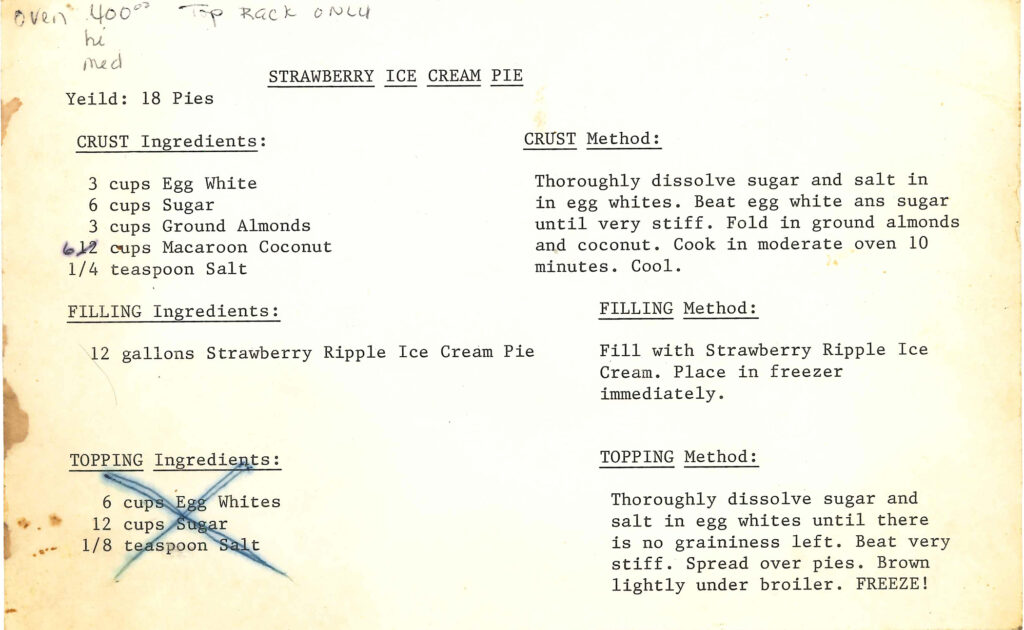 Sims, who retired from UGA in 1999, remembers years of dressing in red and black for game days, listening to Larry Munson announce the football games – “I just loved to hear him talk,” she said – making everything from scratch, and having three mixers going at once for most of her shift.

While the majority of Sims’ pie memories are positive, she recalled one night when she made enough pies for 400 people and they had to be stored in a rented freezer truck.  The rental company mistakenly sent a refrigerated truck instead and they all melted. “It was a heartbreaker,” said Sims.

Born and raised in Athens, Sims mother died when she was 6 and her grandmother taught her to bake. “I always loved to cook, and my sister loved to clean up, so I would try making just about anything,” said Sims. 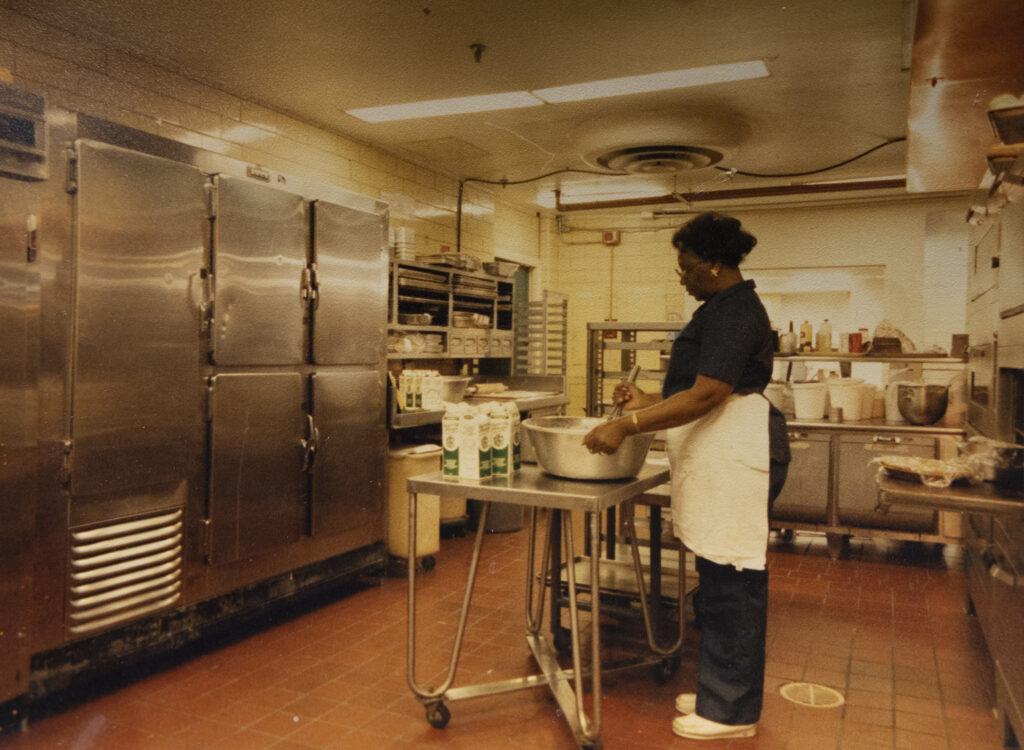 Vintage photo of Luetrell Sims working in the kitchen of the Georgia Center for Continuing Education. (Submitted photo)

Now Sims is enjoying her retirement, feeding her grandkids and great grandkids and continuing to bake for her family and occasionally for church events.

“Momma loves what she does and that really shows in her food,” said Quinetta, who wished her father, who died two years ago and loved Luetrell’s baking, was still alive to enjoy this celebration.

“People ask her if she still makes that pie,” she said. “But she just says ‘No, I’m retired.’