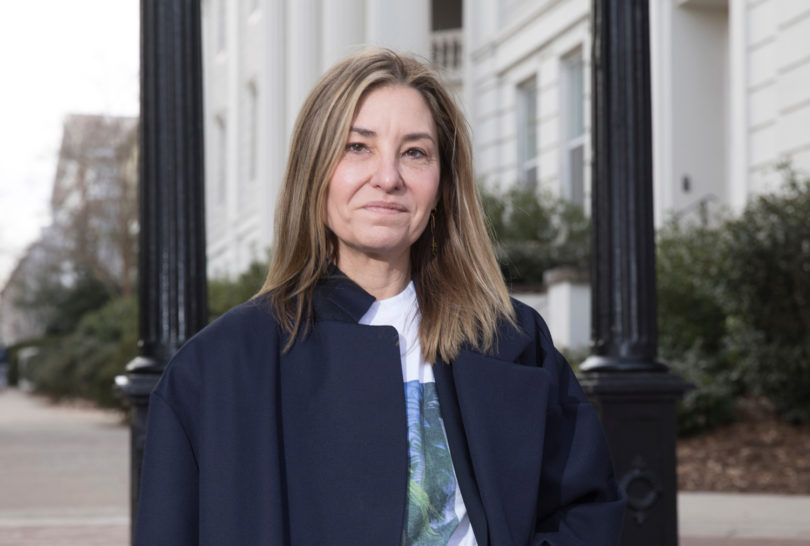 Amy Smilovic, the founder of the worldwide fashion line, Tibi, got her start at the University of Georgia. (Photo by Peter Frey.)

But prior to her move to Hong Kong in 1997, she didn’t know she and her line would become fashion industry staples.

Mere days after arriving in the fast-paced, vibrant city, she launched her now-famous brand with only a few sketches and a lot of determination to make her business a success.

“I started out with really some very shoddy drawings of what I wanted,” she says. “And I can’t even believe that I was able to show these drawings and have people on the design side say, ‘Sure, that sounds great.’ But they did.”

The brand was small to start with—just two dresses, one skirt, and a pair of pants—and print heavy. But it was an immediate hit among expats in Hong Kong, and department stores in the U.S. came calling soon after.

With Tibi’s popularity growing and a baby on the way, Smilovic and her husband, Frank, who joined the Tibi team as CEO, moved the company’s headquarters to New York in the early 2000s. They also established an outlet store in her hometown of St. Simons Island and Tibi’s own shipping warehouse, something other fashion lines outsource, in Brunswick.

The Smilovics rebranded around 2010, with a focus on sleeker, more modern clothing, and by all appearances the new look struck a chord with women around the globe. Tibi now does more than $50 million in sales every year and employs 85 people, with online sales accounting for about 30 percent of its revenue.

“When I first started, I had imposter syndrome for, like, 15 years because I didn’t have a design background,” she says. “But I had fun with it.”

And now the line she launched with only a vague idea of how to run a fashion company, shows at New York Fashion Week, with international editors and celebrities clad in Tibi lining the front row.

This story originally appeared in the Summer 2018 issue of Georgia Magazine with the headline Fashion Forward.