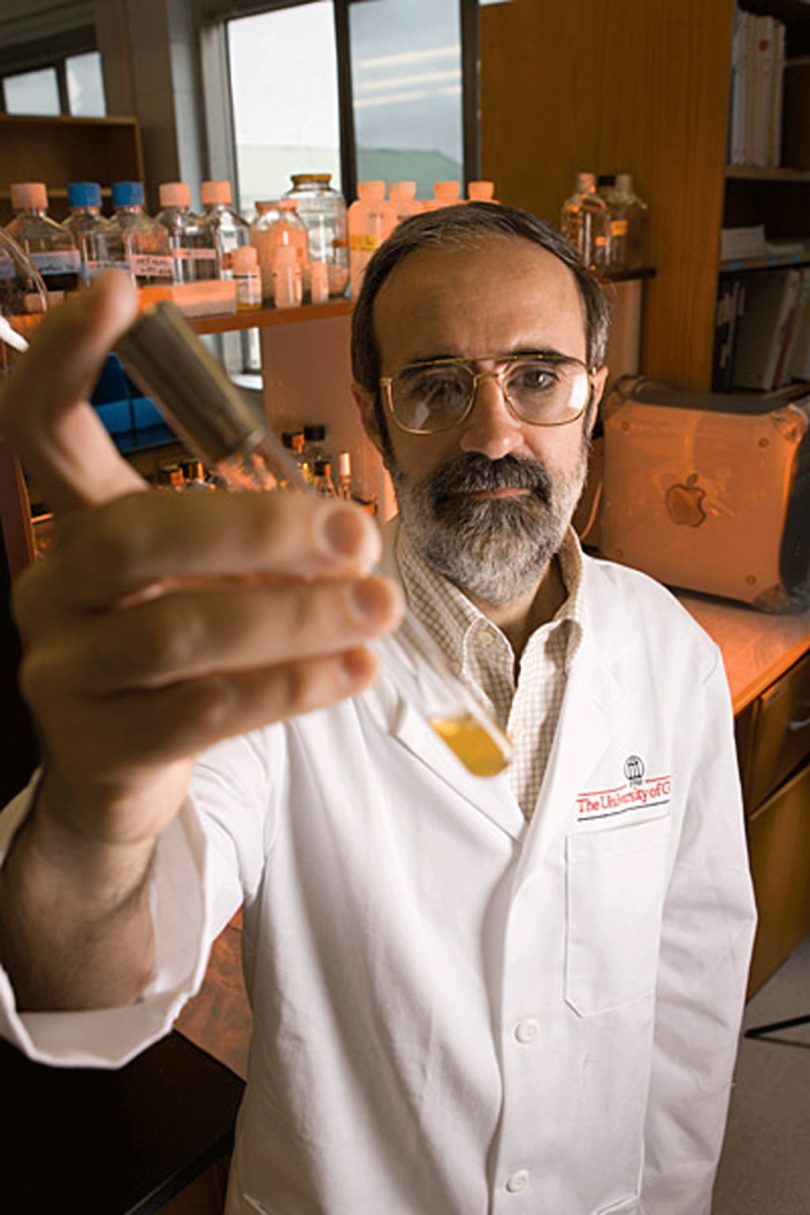 Roberto Docampo is the Barbara and Sanford Orkin/Georgia Research Alliance Eminent Scholar and a professor of cellular biology in the UGA Franklin College of Arts and Sciences.

Athens, Ga. — While its common name may make it sound almost whimsical, sleeping sickness, or African trypanosomiasis, is in reality a potentially fatal parasitic infection that has ravaged populations in sub-Saharan Africa for decades, and it continues to infect thousands of people every year.

Few drugs have been developed to treat sleeping sickness since the 1940s, and those still in use are highly toxic, sometimes causing painful side effects and even death. But researchers at the University of Georgia have made a discovery that may soon lead to new therapies for this critically neglected disease that cause neither the risks nor the pain associated with traditional treatments.

The scientists at UGA’s Center for Tropical and Emerging Global Diseases discovered a specific receptor tucked away in an organelle inside the disease-causing trypanosome parasite that regulates the release of calcium, which is responsible for numerous critical cell functions required for parasite growth and replication.

“This receptor is an attractive drug target,” said Roberto Docampo, Barbara and Sanford Orkin/Georgia Research Alliance Eminent Scholar and co-author of a paper describing their findings published Jan. 14 in the early edition of the Proceedings of the National Academy of Sciences. “The mechanisms we have identified are critical for the survival of the parasite, so if we can manipulate them, we can stop the infection.”

The calcium receptor identified by the researchers serves as a kind of messenger within the parasite, telling it when to secrete specific chemicals, when to divide and when to spread. They hypothesized that disrupting this system would leave the parasites incapable of growing and replicating within their human and animal hosts.

Docampo and his colleagues tested their hypothesis by watching genetically modified versions of the parasitic cell both in laboratory cultures and in mice. In both cases, the genetically altered parasites with dysfunctional calcium receptors were unable to replicate, and mice in the experimental group remained disease free.

“We knew that these organelles were rich in acidic calcium, but it is not until now that we understand how they released the calcium to control cell functions,” said Docampo, who is a professor of cellular biology in the UGA Franklin College of Arts and Sciences. “Now that we better understand this critical pathway, we may begin thinking about new therapies for sleeping sickness.”

The parasite is transmitted through the bite of the tsetse fly, a large flying insect found throughout the midcontinent of Africa that survives by drinking blood from human and animal hosts. Many previous global efforts to prevent transmission of sleeping sickness have focused on controlling or eradicating the tsetse fly, which has proven difficult.

Even when humans are successful in avoiding the bite of the tsetse fly, domesticated animals like cattle and pigs may fall victim to nagana, the animal version of sleeping sickness, which, when translated from Zulu, means “depressed in spirit.” As the name implies, infected animals lose strength, do not produce milk and eventually die.

“We hear calls all the time for these countries in Africa to become more self-sufficient, but animal sleeping sickness has made it very difficult for many people in this region to establish strong agriculture,” Docampo said. “We hope that potential therapies will be equally applicable to animals, and that it will have a positive impact on the area’s economic outlook.”

Docampo and his colleagues are also confident that their discovery will have applications beyond the treatment of sleeping sickness. Although the cells within humans and animals are more complex than trypanosomes, they do carry organelles that function in similar ways to the ones they hope to block in the parasite.

In research conducted with colleagues at the University of Illinois at Urbana-Champaign, Docampo found that the human version of these organelles plays an important role in blood clotting, which may lead to new therapies for uncontrollable bleeding and trauma.

“These are fundamental discoveries about cell life and function,” Docampo said. “We will continue investigating the various roles this organelle plays in our lives and in the lives of other organisms, and we hope that these will lead to new therapies for a variety of disorders.”

Other authors of the report include Guozhong Hwang, assistant research scientist, and Silvia N.J. Moreno, professor of cellular biology, both members of the CTEGD, and Paula J. Bartlett and Andrew P. Thomas from the New Jersey Medical School, Newark, N.J.

UGA Center for Tropical and Emerging Global Diseases
The University of Georgia Center for Tropical and Emerging Global Diseases draws on a strong foundation of parasitology, immunology, cellular and molecular biology, biochemistry and genetics to develop medical and public health interventions for at-risk populations. Established in 1998, the center promotes international biomedical research and educational programs at UGA and throughout Georgia to address the parasitic and other tropical diseases that continue to threaten the health of people throughout the world. For more information about the center, see http://ctegd.uga.edu.