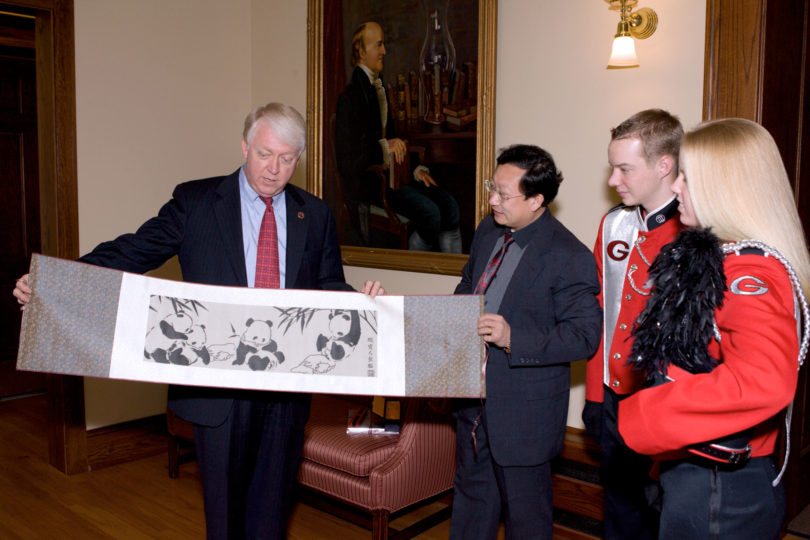 In anticipation of their 16-day tour of China starting May 14, the Redcoat Band invites the UGA and Athens communities to a free send-off concert on May 12 at 7 p.m. at Woodruff Practice Field, off Lumpkin and Smith streets, adjacent to the Spec Towns Track. The concert is sponsored by the Hugh Hodgson School of Music, the UGA Alumni Association and Chick-fil-A.

While the Redcoat Band plays its final practice of the show it’ll be performing in China, attendees can gather with blankets and folding chairs on the hillside above the field. There also will be twirling and dancing from the Redcoat Auxiliary units: the majorettes, the Georgettes, the flagline and feature twirlers.

Members from the UGA chapter of the Georgia-China Alliance will attend the event, as well as university mascot Uga VI and the Chick-fil-A cow mascot. Chick-fil-A is one of the band’s major financial partners for the China trip, and will be selling food at the event.

During their two-week concert tour-which was planned at the invitation of the U.S.-China Cultural and Educational Foundation-the Redcoats will spend time in Beijing, Chengdu, Kunming, Nanjing, Xiaemen and Shanghai, where they will perform longer-running shows than usual.

“Developing and learning a 90-minute show is a special challenge, when you consider that at typical half-time show lasts about seven minutes,” says David Romines, director of the Redcoat Band.

However, the Redcoats are up for the challenge, according to Romines. Band members have scheduled extra rehearsal times; additionally, they’ve taken Chinese language and culture lessons. UGA’s Office of International Education has classified the trip as a “nontraditional” study-abroad program, bringing it under UGA study-abroad guidelines.