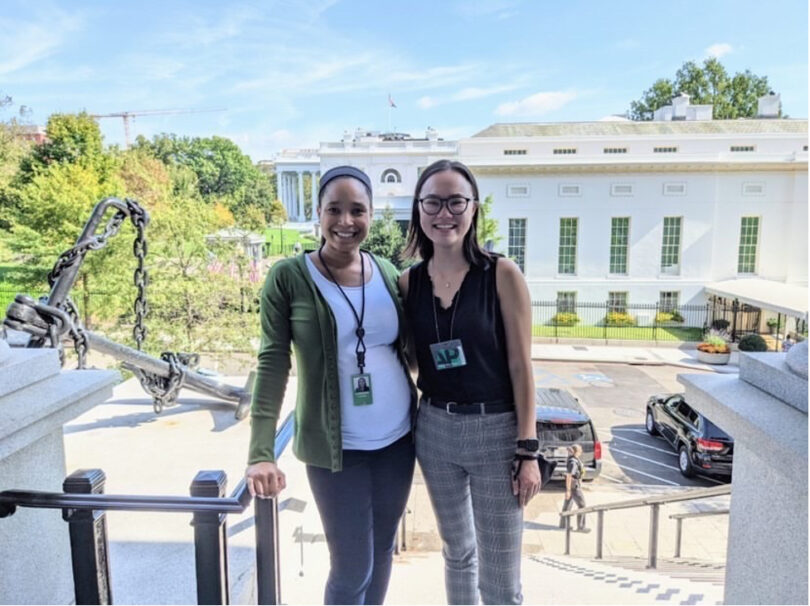 As the first person in her family to attend college, Kelly Strachan was a bit overwhelmed by navigating life at the University of Georgia when she moved into Creswell Hall her freshman year. But then she signed up for the UGA Mentor Program.

She worked with three different mentors during her time at the university. First, she connected with alumnus Brian Dill, vice president of external affairs for Tanner Health Systems, who she credits with getting her interested in health administration and policy.

Later, alumna Marylen Rimando, a health scientist with bioinformatics firm IHRC Inc., became her mentor. And while Strachan stays in touch with both of these alumni, her mentorship with Christina Carrere, senior Medicare program examiner with the White House Office of Management and Budget, Health Division, was the relationship that proved life-changing.

From SPIA to the White House

Strachan was a student in UGA’s School of Public and International Affairs when she first reached out to Carrere through the UGA Mentor Program. Carrere said since her work largely keeps her confined to Washington, D.C., she wanted to find a more consistent and meaningful way to stay engaged with UGA and its students. The UGA Mentor Program fit the bill.

What started as a general informational interview with Strachan quickly grew into deeper discussions about graduate school, career paths, personal challenges each have faced and diversity in the workplace. The result is a connection that has long outlasted the formal mentor-mentee cycle in the UGA Mentor Program, which typically lasts 16 weeks.

“Kelly and I initiated our mentor-mentee relationship during the COVID-19 pandemic, which was important given my work in health policy and her interest in the field. The timeliness of the pandemic gave us opportunities to discuss the different roles individuals play in responding to something of this magnitude as well as the good, bad and ugly of how policy is formed and shaped using real-world examples in real time,” said Carrere.

Several months into their connection, Carrere wrote a letter of recommendation for Strachan to her graduate school alma mater John Hopkins Bloomberg School of Public Health. Strachan is now a graduate student and a graduate teaching assistant there.

Later, Strachan spotted a posting on Carrere’s LinkedIn page about an internship on her team at the White House. She applied and got the position all on her own. (It just so happened that Carrere was on a leave of absence throughout the application and interview process.)

Back in time for Strachan’s first day, Carrere counts taking Kelly on her first tour of the White House complex and grabbing a picture with her outside of the West Wing as a cherished memory.

“Seeing a relationship that started as a virtual connection grow into all of this is a testament to the power of the UGA Mentor Program and its ability to connect students and alumni across the world in meaningful ways,” said Carrere.

While Strachan was still a student at UGA, she became an ambassador for the mentor program. Ambassadors work with other students and UGA Career Center staff to foster a culture of mentorship at UGA by developing programming, partnerships and marketing strategies that bring heightened awareness to the UGA Mentor Program.

Recently, Strachan heard from one of her first mentors about a UGA student who wants to follow a path similar to hers. Strachan was all too happy to connect with her and plans to stay in touch. She described it as a full-circle moment. “I truly hope every student at UGA, who may be feeling a little lost or overwhelmed like I was, finds the support they deserve.”

January is National Mentor Month, and Jan. 17 is International Day of Mentoring. To learn how you can become involved with the UGA Mentor Program, visit mentor.uga.edu.