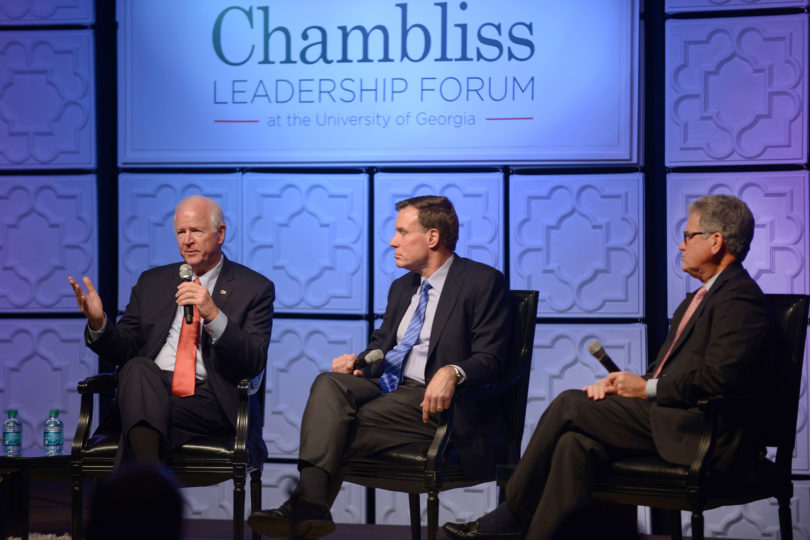 Atlanta, Ga. – Students at the University of Georgia will have the opportunity to intern as Chambliss Fellows in Washington, D.C., thanks to scholarship funds raised during the first Chambliss Leadership Forum dinner held Nov. 10 in Atlanta.

Founded in 2014, the Chambliss Leadership Forum encompasses three programs: the annual fundraising dinner, the Chambliss Fellows Program and a campus lecture series. Chambliss Fellows—five UGA students competitively selected each semester—will be provided with financial and academic assistance to live, work and pursue their passion in the nation’s capital.

A number of students and influential policymakers joined the celebration of former Sen. Saxby Chambliss, R-Ga., and his wife, Julianne, both of whom are UGA alumni and have been public servants since Chambliss was elected to office in 1994.

“The Chambliss Leadership Forum provides a unique opportunity for our students to learn from Sen. Chambliss and to witness policymaking in the nation’s capital,” said UGA President Jere W. Morehead. “It offers an unparalleled learning experience for those who are interested in careers in government and politics, and we are deeply appreciative of Sen. and Mrs. Chambliss—and of our donors—for establishing the program at the University of Georgia.”

The event, which raised more than $350,000 to help endow the fellows program, included a panel discussion with Chambliss, Sen. Mark Warner, D-Va., and former Sen. Tom Coburn, R-Okla. The discussion was moderated by former WSB-TV sportscaster Chuck Dowdle and included questions from the audience on issues ranging from entitlement reform to national security.

“This was a great night for the University of Georgia and for the future of our great state,” Chambliss said. “I am grateful to all those who joined Julianne and me to make this such a successful event. I am particularly excited to think about those students who will be able to take advantage of a semester in Washington as a result of a scholarship funded through this effort. These students will be working in various capacities with the ability to impact national policy.

“At the end of the day, when you have folks from Georgia participating in national policy discussions, our state benefits.”

Chambliss was first elected to Congress in 1994 as a representative of Georgia’s 8th District. He was elected to the U.S. Senate in 2002, where he served until his retirement in 2014. He has been recognized for his work on agriculture, defense, budget and national security issues throughout his legislative career. He served as vice chairman of the Senate Select Committee on Intelligence for four years and as chairman of the Senate Committee on Agriculture, Nutrition and Forestry for two years.

Chambliss received his bachelor’s degree in business administration from UGA in 1966 and his Juris Doctor from the University of Tennessee in 1968.