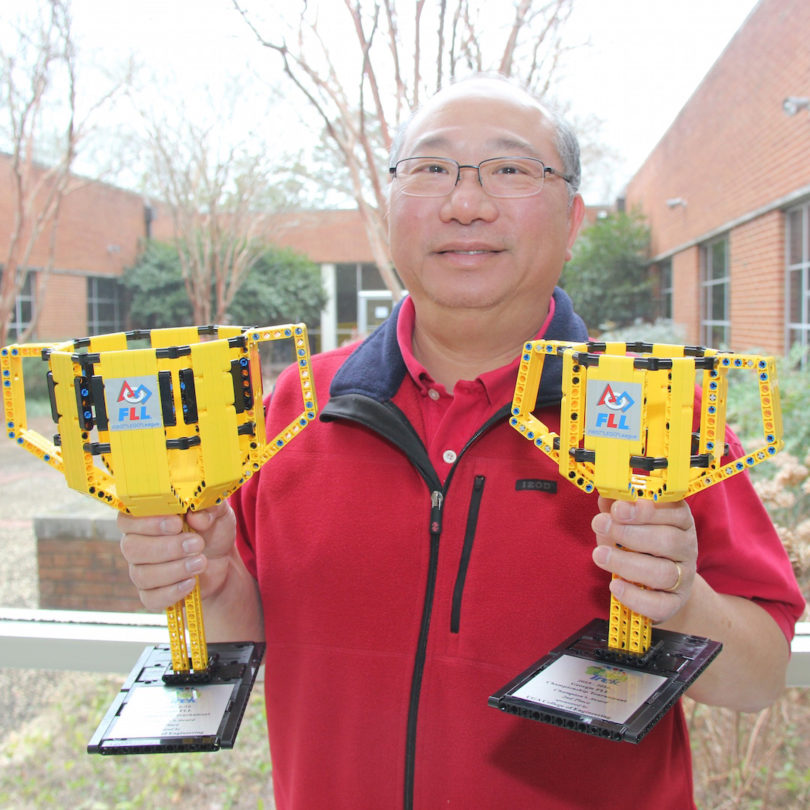 Chi Thai holds the first and second place trophies for the 2016 FIRST LEGO League state championship hosted by the University of Georgia College of Engineering.

Athens, Ga. – Thirty-two elementary and middle school robotics teams from Georgia will compete in the annual FIRST LEGO League State Tournament this Saturday at the University of Georgia. Hosted by the UGA College of Engineering, this year’s event will challenge teams to solve a real-world trash problem.

During the competition at the Miller Learning Center, teams will build, test and program an autonomous robot using LEGO MINDSTORMS technology. Throughout the day teams will present their research and innovative solutions to judges. The participants must also demonstrate how they work effectively as a team.

“FIRST LEGO League not only introduces younger students to robotics and engineering, it also challenges them to apply critical-thinking skills to open-ended problems,” said Chi Thai, an associate professor in the UGA College of Engineering who is serving as the event coordinator for the tournament.

FLL is a partnership between the LEGO Group and FIRST—For Inspiration and Recognition of Science and Technology—an organization founded in 1989 by inventor Dean Kamen to motivate young people to pursue careers in science, technology and engineering.

To learn more about the tournament, visit http://thai.engr.uga.edu/UGAFLL/index.htm.