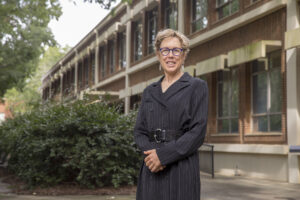 Sally Walker, paleontology expert and mentor to UGA students, has been selected as the first Shellebarger Professor in Geology in the Franklin College of Arts and Sciences.

A professor of geology with a co-appointment in marine sciences, Walker is principal investigator on a National Science Foundation grant for collaborative research on the Antarctic Scallop as a key to paleoenvironments and sea ice conditions. A Fellow of the American Association for the Advancement of Science, she was one of two women chosen nationally for the Society for Sedimentary Geology first Field Experiences Program in Argentina, working with South American graduate students and professors in the Neuquén Basin, Northern Patagonia.

Walker’s research focus is on fossil forensics—how organisms become fossilized, which includes the study of physical, biological and chemical factors that affect the preservation of calcium carbonate shells.

“I like to say I read shells for a living. By looking at a shell, I can tell you where in the world it originated, what environment it lived in, how it lived, how it died, its fossilization condition and how it was curated after discovery,” Walker said. “Shells are among the greatest novels on Earth.”

Jeff and Sydney Shellebarger met at the University of Georgia in the late 1970s. They dated throughout college, and even after leaving UGA more than 35 years ago, the couple remain friends with many of their peers. They strengthened their ties to the university by endowing the Shellebarger Professorship in Geology—the first professorship for the department.

After graduation, Jeff and Sydney embarked on a global journey that followed Jeff’s career with energy company Chevron across the United States, Africa and finally, Indonesia. Sydney’s first job at the College of Family and Consumer Sciences’ McPhaul Center in Athens led her to advocate for children wherever the couple traveled.

The couple relocated to Houston a few years ago, where Jeff just recently retired as president of Chevron’s North American exploration and production operations. Returning to the U.S. spurred the Shellebargers to review their long-term giving priorities and identify the organizations they wanted to include.

“I always wanted to give back to the university,” Jeff said. “We specifically wanted to help the department of geology attract quality professors and students. We weren’t sure what that [support] looked like, but UGA’s development staff helped us develop a plan that made the most of our contributions and aligned with the goals we set.”

“I am honored to be selected for the Shellebarger Professorship,” Walker said. “Mr. Shellebarger is a vigorous supporter of our geology M.S. graduate students, providing three incredible fellowships in structural geology, sedimentary geology and geophysics. I plan to use the research stipend to support undergraduate research projects in geology for two students this year: Lindsey Mikayla Jordan, a Coca-Cola First Generation Scholar and a talented scientific artist, who will be working on crocodilian preservation in the fossil, and Hampton Hotard, a passionate free diver who is working on the diversity of fossil shark preservation in the southeastern U.S.”

Also a Paleontological Fellow and Geological Society of America Fellow, Walker has received the Antarctica Service Medal from the National Science Foundation. She served as the Halbouty Endowed visiting Chair at Texas A&M University, College Station, Texas, for spring 2019, and serves as an associate editor for the journals Palaios and Ichnos. She chairs the Arthur James Boucot Research Award committee for the Paleontological Society that supports early career paleontologists.

For the Shellebargers, supporting their alma mater is an important commitment.

“We owe a deep debt of gratitude to the professors, departments and the university,” Jeff said, “and we will enjoy watching the university continue to grow and hope that our gifts will help in that success.”