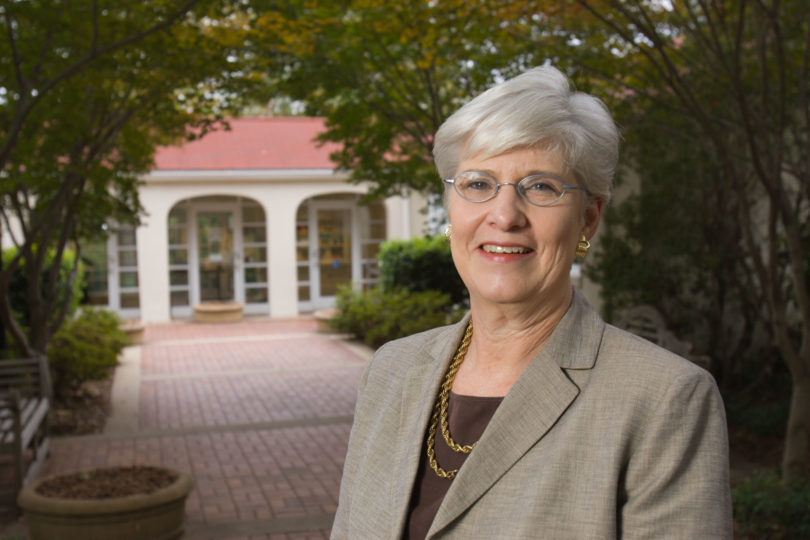 One of the first voices many visitors to campus hear may be that of Fran Lane, the director of the Visitors Center who is slated to retire at the end of the month.
And what a voice it is.

As those who’ve met Lane can attest, her accent could be drizzled over pancakes. She can cram an amazing number of syllables into words like “hour,” and  espouses homespun turns of phrase at the drop of a hat.

“People talk about the way I talk. It’s funny, I don’t think I have an accent,” Lane said from her office off River Road. “I grew up right here in Athens.”
But the students and visitors who have come to know “Miss Fran” throughout her years at UGA, aren’t just going to miss her genteel drawl.

Since becoming the Visitors Center’s first and only director in 1995, she has guided the program from an fledgling idea to a fully functioning, student-staffed welcome wagon.

“The final catalyst in (creating the center) was the 1996 Olympics,” she said. “When we learned that we would be hosting some of the events, there was an estimate that more than 100,000 people a day might come to campus for the first time. So we needed a place where people could get information and that sort of thing.”

Administrators decided to create the Visitors Center out of an old dairy barn near Loop 10, where it would be a   convenient stop for people just-arrived from out of town. Taking a cue from Cornell University’s Visitors Center, they also decided to use students to staff the building and guide tours.

That’s where Lane comes in.

“My graduate degree is in student personnel counseling, which basically is teaching you how to work with college-aged people,” she said.

“We’ve been doing this for 12 years now and part of the fun is getting to know the students and knowing that we’re all sort of in this together. You’re pulling off a special event every time you do a tour. It’s like one of those old Mickey Rooney-Judy Garland movies where they say, ‘Let’s put on a show!’ ”

Her personal history with the university  has deep roots. The daughter of UGA graduates, she received both undergraduate and graduate degrees from the university and married a fellow Athenian.

Throughout her nearly 30 years at UGA, Lane has worked in the development office, the Evening Classes Program, the admissions office and as an assistant for former UGA President Charles B. Knapp before stepping into her current position.

“The university’s been part of my life forever. I couldn’t imagine leaving if I were not coming back,” she said.

Lane plans to return to the Visitors Center on a part-time basis in December. Her ratcheted-down duties will include assisting the next director and working on a special undertaking she began more than a year ago.

The task, appropriately, is an oral history project consisting of a series of recorded interviews with university alumni, professors and staff. The project will preserve history through the words of those who experienced it.

“This is a wonderful opportunity to do some things that I want to do ‘outside’ and still be here,” she said.