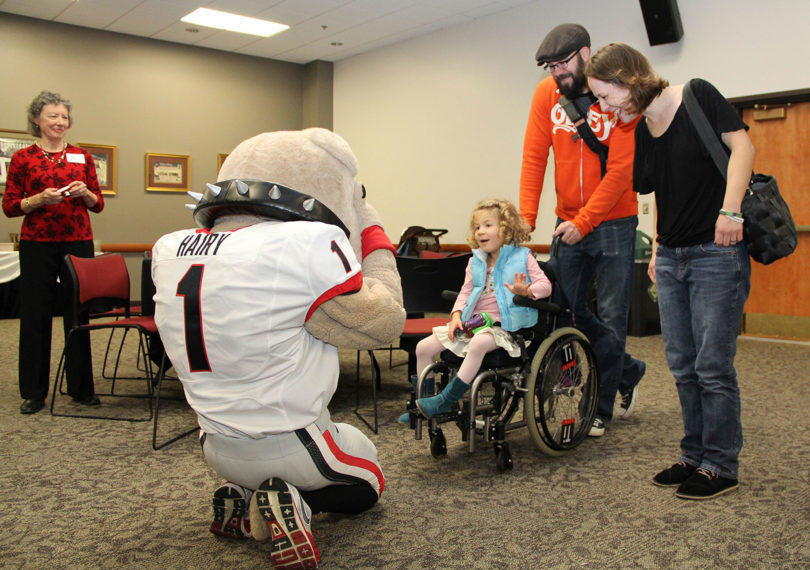 In the “Geeks with a Cause” class offered by UGA’s College of Family and Consumer Sciences’ Institute on Human Development and Disability, students learned to adapt toys for use by children with physical disabilities.

“We were told there were families in need and how certain adaptations for toys can be very expensive, and (course instructors) showed us how doing what we do, we can knock the price down by more than 90 percent,” said Reggie Mosley, a mechanical engineering major from Albany. “By us doing this, some kids can have a nicer Christmas. That was our motivation to  work as hard as we could.”

The recipients of the toys, all children 7 and younger, have limitations that make it nearly impossible to activate a simple toy.

The students were taught how to use a soldering iron and how to bypass the toy’s original circuitry and create a larger “switch” that would allow kids with disabilities to easily activate the toy, saving the parents up to $100 on adapted toys.

The course was the brainchild of Zo Stoneman and Becky Brightwell, who run the Institute on Human Development and Disability.

The students represent various majors at UGA-everything from biology to statistics to business and special education-but few had intimate knowledge of the issue before taking the course.

On a rainy day in early December, the “geeks,” as they were lovingly called by the parents of the four little boys and girls who received their new toys, delivered the adapted contraptions to their smiling recipients.

Seven-year-old Ella received a dancing “Rock Star Mickey” doll, as did little DJ, and Ari got a Busy Gears toy.

The toys are activated by a simple tap of a switch created from a soft plastic CD cover.

Over and over, little curly-haired Ari pressed the switch and watched the bright, shiny gears light up and turn. She squealed with laughter each time.

“It made us feel on top of the world,” said Ari’s mother, April Moss. “She’s so excited about it.”

She wasn’t the only one.

Brightwell and Stoneman stood alone after the room had cleared out. The kids had gone off with their parents and new toys; the students had left to prepare for upcoming finals.

The two directors went about tidying up the large conference room. Somebody asked them about these students, these 16 freshmen who made the world a little bit better.

“I’ve never been so proud in all my life,” she said. “It’s been one of those great classes that I think we were able to take to a different level.”

For more information on the Institute on Human Development and Disability, see
http://www.ihdd.uga.edu. Also, Brightwell offers daylong workshops for people interested in adaptive technology. The next sessions are scheduled for Jan. 22 and March 12. She can be reached at 706-542-6061 or bbrightw@uga.edu.