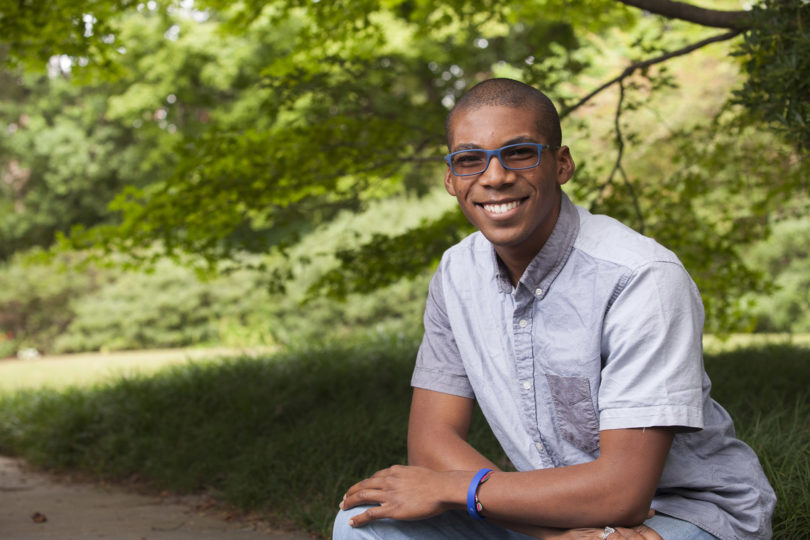 Many students enroll at UGA dreaming of making a difference and becoming leaders.

Charles Orgbon III, a first-year student from Dacula, got a head start-beginning classes in the fall already having founded an environmental nonprofit with a global reach, written op-ed columns for The Huffington Post and been recognized with the McDonald’s 365Black Award.

Orgbon, founder and CEO of the youth environmental group Greening Forward, found his calling as an environmentalist during a fifth-grade school assignment. As a required service project, he organized efforts to pick up litter at his school. Troubled by the trash people thoughtlessly left behind for others to clean up, he wanted to do something about it.

“It turned into a passion,” Orgbon said.

He started a student club for beautification projects and began blogging about environmentalism. Those undertakings turned into Greening Forward, an organization that now partners with young people around the world to provide environmental curriculum resources, grant programs and mentorship opportunities.

“We fund and train young people to lead environmental service projects in their communities,” Orgbon said.

During a TEDx presentation in Atlanta last year, Orgbon told his audience, “My belief is simple: If you give young people the resources and tools they need, they can create community change.”

In his role as CEO and chief fundraiser, Orgbon has helped lead negotiations to partner with major corporations, foundations and other nonprofits to further the cause for environmentalism. Greening Forward has partnered with Wells Fargo, Ben and Jerry’s, State Farm, Levi’s and musician Jack Johnson. Since 2009, the organization raised more than $150,000 for its initiatives.

Orgbon said one of the most surreal moments during his efforts was getting a kiss from R&B legend Gladys Knight when he received the 365Black Award in 2013.

Out of a desire to further his education while continuing his leadership at the nonprofit, Orgbon chose to earn his degree at UGA. He is studying environmental economics and management in the College of Agricultural and Environmental Sciences.

Orgbon first was introduced to UGA in high school through the Young Scholar Internship Program, through CAES. He stayed at Myers Hall for a few weeks and enjoyed the campus life.

He is the 2014 recipient of the Black Alumni Scholarship, which is sponsored by the Alumni Association and given to a first-year student who exhibits dedication to racial equality.

Orgbon plans to continue his environmental work through his education at UGA, but he’s found other interests on campus, too.

“That has nothing to do with my major, but for fun I will spend hours in that library,” Orgbon said.

He has been doing independent research on Charlayne Hunter-Gault and the late Hamilton Holmes, the first African-American students to enroll at UGA. He credits his interest in that research to the Office of Institutional Diversity, where he is a student worker.

Orgbon said he is fascinated by what Hunter-Gault, Holmes and others endured to help pave the road for African-American students to attend UGA.

If his achievements so far are any indication, Orgbon could be well on his way to paving a new road for young people to follow in environmental advocacy.