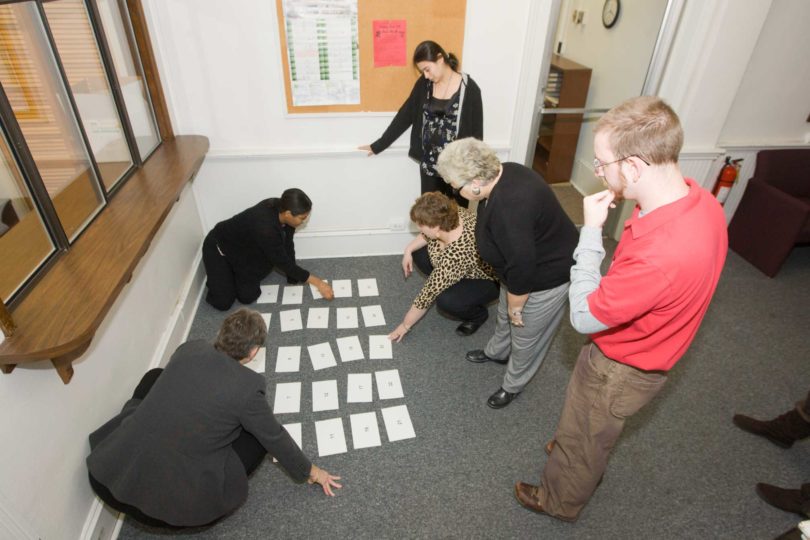 What do the registrar’s office and the world famous Pike Place Fish Market have in common?

While the registrar doesn’t usually have trout flying around the workplace like the fish market is known for, both the registrar’s office and the Seattle fish mongers ascribe to the work ethic known as the Fish! Philosophy.

The philosophy, which originated at the fish market, strives to make the workplace more fun and to create energy. At the fish market, it means halibut and crabs being tossed across the market to entertain customers. At the registrar’s office, it doesn’t mean associates throw transcripts at students or bring in raw perch. Instead it may mean games of Christmas Jeopardy! or decorating traced-hand turkeys for Thanksgiving. It means dressing up in Wild Wild West garb for Halloween and tossing cards in fish bowls to recognize co-workers who go above and beyond their specified job duties.

Macon said she’s used the Fish! Philosophy at previous jobs. She has toured the fish market and has seen it in action, and thought the concept would be a nice addition to the office.

“The staff has been very receptive to it,” she said. “We’ve had a lot fun with it.”

Activities are held a few times a month, usually around 8 a.m., when the office first opens but before it gets busy with student requests. Supervisors cover the phones and the floor while games occur.

Segreti said the philosophy has been a real stress reliever around the office and gives employees something to look forward to.

On Jan. 20, about 20 registrar staff crowded around, laughing, joking, smiling and clapping to play a memory match game with colorful pictures of fish, sea horses and other sea creatures. The self-named teams—Destructor, Bobcat, Cat Fish and Clown Fish—competed to have the most matches, and the four members of team Clown Fish won balloons featuring Scooby Doo and other cartoon characters.

The games, though, aren’t about the prizes. It’s all about teamwork, getting to know your co-workers and having a good time.

“It’s a good activity for the entire office,” said Mari Catherine Napoli, an administrative associate. “It definitely helps at the beginning of the day. We can kind of wake up a little bit and get moving.”

She said she also likes that she gets to interact with co-workers she typically doesn’t see during any given day.

“Who doesn’t want to start work a little later and get to relax?” she said.

Macon said the office’s management team has really been supportive of it.

“It’s too easy for all of us to get caught up in our daily work,” she said. “And so, it’s a definite effort to keep it going, but you see the benefits of it. So it’s worth it.”

The Fish! Philosophy is also popular with other departments around campus. Introduced by Training and Development several years ago, units including University Housing and the Georgia Center for Continuing Education Conference Center and Hotel use the philosophy in training. Years ago the Georgia Center incorporated the games and even now incorporates the philosophy into providing good customer service, according to Jann Moore, human resources coordinator.

The Fish! Philosophy stresses four main principles: “be there,” “make their day,” “choose your attitude” and “play.” Translated to the workplace, “be there” means to focus on the customer or co-worker you’re engaged with; really listen to them even if that means blocking everything else out.

The next principle, “make their day,” can mean complimenting a co-worker or simply going out of your way to make a customer or co-worker feel better if they’re having a bad day.

“In the registrar’s office, so much of what we do is following policies and procedures, and a lot of time we have to say no to students,” Macon said. “What we work with our staff on is that the way we handle it is very important: offering them some options, some other alternatives. But doing anything like that, so you’re not sending them away angry or upset.”

“Choose your attitude” means selecting how you’re going to react.

“There’re always days when you get up and don’t want to come to work,” Macon said. “But we’re responsible, regardless of what’s happening around us, to choose our attitude for how we’re going to deal with something. We can react or respond however we want, with a good attitude versus mumbling about it or getting angry with someone.”

“It’s okay to laugh and have fun during the day,” Macon said. “And as long as work is getting done and getting done accurately, the chatter, laughter and taking a few moments to have fun with one another is fine.”