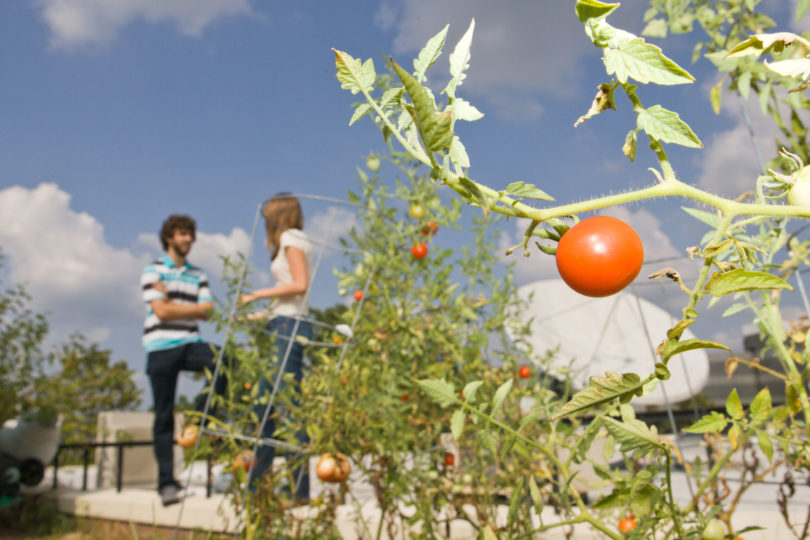 What’s growing on the top of the geography-geology building is feeding the masses. Or it can be, given the time to branch out.

Sprouting from geography classes on campus, the six raised soil beds are the first venture from the Athens Urban Food Collective, a service-learning group based in the geography department. Started in February, the AUFC attempts to straddle the university-community line by simultaneously feeding the hungry and challenging student minds.

The group is headed by geography professors Hilda Kurtz and Nik Heynen, but relies heavily on student input and guidance. So far, the garden has been a regular supplier for Food Not Bombs, a progressive community group that serves free vegetarian meals to the hungry three times a week in downtown Athens. That group, which uses community kitchen facilities at the nonprofit resource center Common Ground, gleans most of its produce from the North Georgia Food Bank.

“We started this to address the local inequalities of the food system in Athens,” Heynen said. “For instance, Food Not Bombs. . . gets donations from grocery stores of tomatoes that are past their sell-by date but still have nutritional value. So we do a lot of stew making.”

The project has found interest within the department, with other professors donating plants and tools to the garden. Heynen recently received a service-learning fellowship from UGA’s Office of Public Service and Outreach. The fellowship comes with a cash stipend he plans to spend on the project.

“We’ve finished a growth plan for the next three years, so we know what plants can grow in what seasons. But we want to expand past the rooftop garden and get more involved in other parts of the process,” he said.

As interest and funds balloon in the next year, leaders plan to extend the group’s reach further into the community and classroom. So far, the work the students perform grows out of assigned reading and class discussion. But learning about local food systems and seeing them in action can mean different things, according to Kurtz.

“Not everyone learns the same way and some people are hands-on learners, so this was a good way to reach the students who don’t learn as well from sitting in a classroom, day after day, taking notes,” she said. “Learning about something and experiencing it with all the problems that occur in the real world can be very different.”

The group recruits students via service-learning and other assignments in some of Heynen and Kurtz’s classes.

That’s how Megan Louise Freeman, graduate student and AUFC intern, found the project. Freeman studied the collective garden in the Brooklyn community off Hawthorne Avenue for Heynen’s class. After spotting her interest, he recruited her to help launch the AUFC.

“I didn’t know stuff like this was going on, and I’ve been studying this for years,” she said. “People are interested in doing this, but don’t know how to get involved, which is one of the reasons that a zine could work.”

The zine, or small-scale non-commercial magazine, is a project idea Freeman and the group may begin this year.

AUFC’s other co-convenors, in addition to Heynen and Kurtz, are Samantha Carvalho of the Athens-Clarke County Department of Human and Economic Development, Krista Jacobsen of the Common Ground Activist resource center, and James Talkin of Food Not Bombs. As co-convenors, they work to maximize the group’s effectiveness and lengthen its reach into the community.

“We have a big idea, we’re trying to find what works and what fits best for us,” Kurtz said. “Right now it’s sort of a hybrid, it looks like club, but it’s more intellectual than that because of all the reading and studying the students do.”

The group is open to volunteers across campus, but is still in its early phases. Anyone interested in the project or wishing to find out more about local food systems should visit the Promoting Local Agriculture and Cultural Experience Web site (www.localplace.org), which acts as a bulletin board for like-minded organizations.