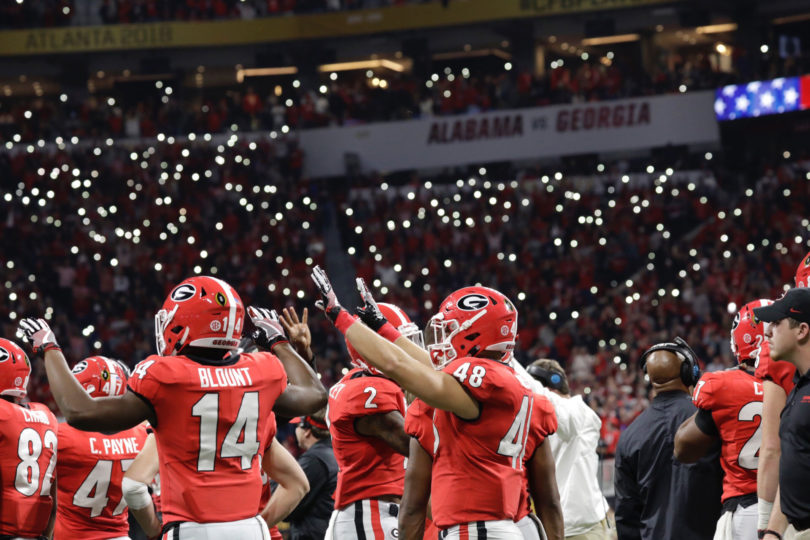 The Bulldogs finished the 2017 season ranked second in the nation with a 13-2 record after an overtime loss to Alabama in the College Football Playoff national championship game. (Photo by Dorothy Kozlowski)

Along the Georgia sideline, like most everywhere else on the field at Mercedes-Benz Stadium, the red and white confetti fell Jan. 8. But there was no joy to be found.

Running backs Nick Chubb and Sony Michel sat side by side as the confetti fell on and around them. Over their shoulder pads a scoreboard flashed the cruel numbers: Alabama 26, Georgia 23.

It’s one thing to watch the College Football Playoff national championship game, see Georgia take a 20-7 lead midway through the third quarter and then watch as Alabama stormed back and prevailed in overtime, winning on a 41-yard touchdown pass that sent the crimson-toned confetti raining down.

It’s quite another to see a very real and human side, like two good, noble and distinguished seniors in Michel and Chubb overwhelmed after a gut-punch of an ending. Soon, junior wideout Terry Godwin came over to give his two teammates hugs, and then coach Kirby Smart joined in. 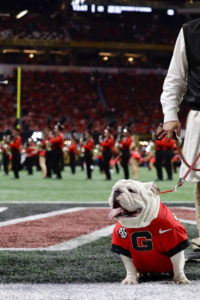 It was a moving scene, beautiful and brutal. Seeing that kind of anguish, you wonder if all that work and effort and struggle to get here is worth the risk of a painful moment like the one Bulldogs were experiencing on the sport’s biggest stage.

A few minutes later, when the locker room was opened to the media, tight end Jeb Blazevich was asked about the pain and whether it’s all worth it. Teary-eyed and torn up, the senior didn’t hesitate to say yes.

Senior defensive back Aaron Davis said the joy of the ride that carried them to the national championship game will be with him for the rest of his life.

“The joy comes in being with your teammates, all your brothers, stuff like that, all the things that are going to last when the games start to fade from your memory,” he said. “It’s about the relationships you make with your brothers. That’s why you play the game and why you continue to play when stuff like this happens.”

There was a moment of post-game joy to be had, and hopefully it brought some small comfort to Georgia’s players and coaches. It came when the players, many leaning on each other for support, started walking off the field.

That’s when the chant began, certainly hundreds strong, from a hearty bunch of the 77,430 who packed the Benz to watch the Bulldogs and Crimson Tide go at it. The Georgia fans were clearly gutted, too, but a lot of them had the energy to give these Bulldogs the sendoff they’d earned: “U-G-A! U-G-A! U-G-A!”

As Davis said, the joys from this season will last far longer than the pain of the fourth quarter and overtime. There was the triumph at Notre Dame, the rise of Jake Fromm, the extraordinary and dominating play of Roquan Smith, one more season of watching Chubb and Michel share the stage. There was the stumble at Auburn and the fun and exciting game days that followed.

The magic might have run out a bit before Georgia could get across the finish line, but what magic it was. It’s why we’re all here: for those moments of magic that aren’t guaranteed to anyone but were there often on a four-month ride with the Georgia Bulldogs in 2017.