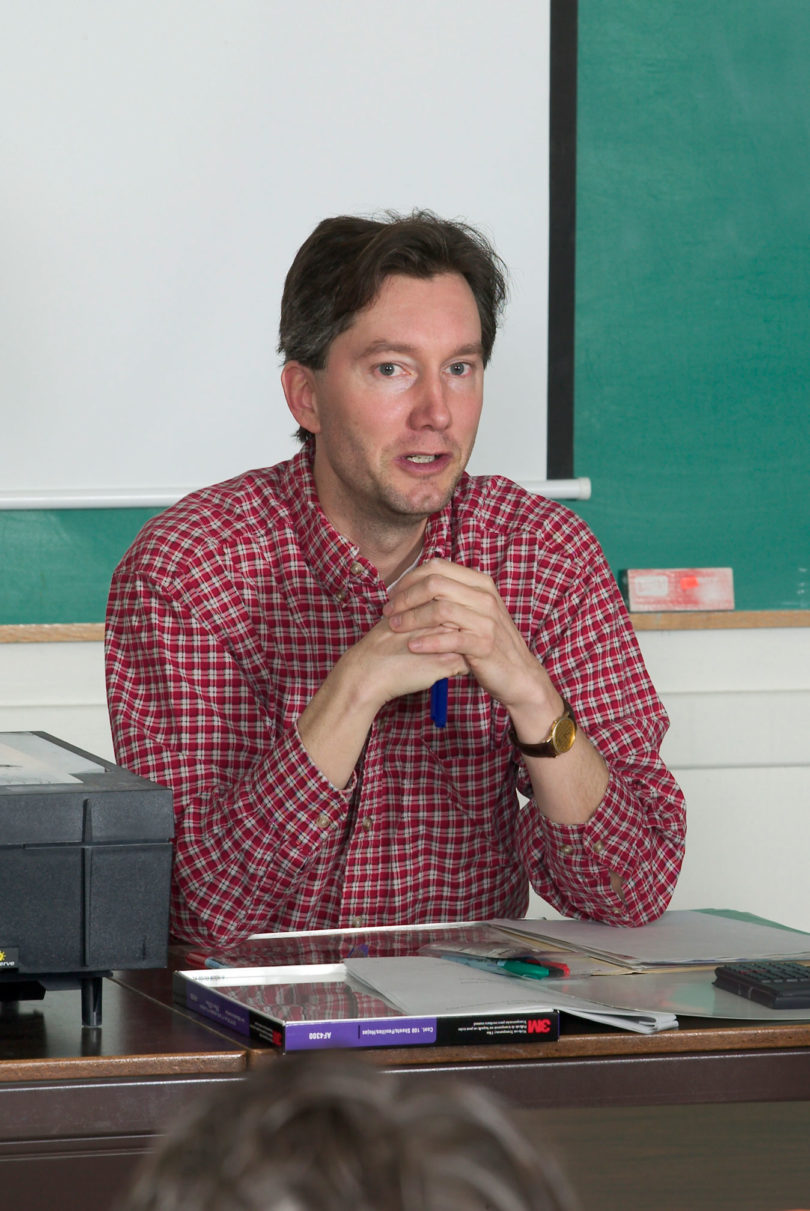 Rhett Jackson sits on a table as students file into his class, FORS 4140-introduction to wetlands. When all the seats are filled, he stands and says, “Okay, everyone follow me-quick little field trip.”

The students look at each other quizzically but follow him out the door. Jackson practically skips down the four flights of stairs to the courtyard, gaining speed as he descends. He goes outside to a place where workers with shovels are turning up large chunks of muddy sod.

“These guys are looking for a leak in the underground water pipes,” says Jackson. “Can everyone see how the water running downhill here has formed channels underground? And even though this is a completely artificial situation, this is exactly how natural channels are formed too,” he says. “This scene relates exactly to our lecture today. Did everyone get a look? Okay then, back to class.”

Jackson, a hydrologist in the Warnell School of Forest Resources, takes advantage of every opportunity to teach.

Four years ago, Jackson brought together water resources faculty from across campus to look at UGA’s water resources course offerings. The result was the establishment in 2002 of an interdisciplinary undergraduate Water Resources Certificate Program, open to science students across campus. Administered through the School of Forest Resources, the program involves more than 20 faculty members from 10 academic departments. Its first three graduates completed the certificate in 2003.

Jackson’s research looks at how human activities, especially forestry and urban development, affect aquatic habitats and water quality. A current study, funded by a $475,000 grant from the U.S. Environmental Protection Agency, assesses the effectiveness of forestry’s best management guidelines in protecting waterways from sediment and herbicides.

“Hydrologists work in an area where federal programs have been a phenomenal success,” says Jackson. “With the exception of urban areas, water quality in this country is ­tremendously better than it was 30 or 40 years ago, almost solely because of federal grants that improved wastewater treatment plants. Plus-agriculture and forestry practices are much more environmentally friendly today than they were 30 years ago.”

Jackson began his professional career as an engineer in California where he worked for the L.A. County Sanitation District.

“I was hired to design a ‘refuse-to-energy facility,’ ” he says, “but soon after I was hired, the project got canned because of politics. So they made me a groundwater monitoring specialist-and I knew absolutely nothing about hydrology.”

A few years in hydrology convinced Jackson that he no longer wanted to be an engineer. He packed up and moved to Seattle where he enrolled in the Ph.D. program in hydrology at the University of Washington. After earning his degree, he took a job with Washington state’s huge King County government, developing water models.

Jackson says he likes hydrology because “the issues are important and you always feel needed. Also, it involves a mix of basic and applied research that often changes how the world works.”