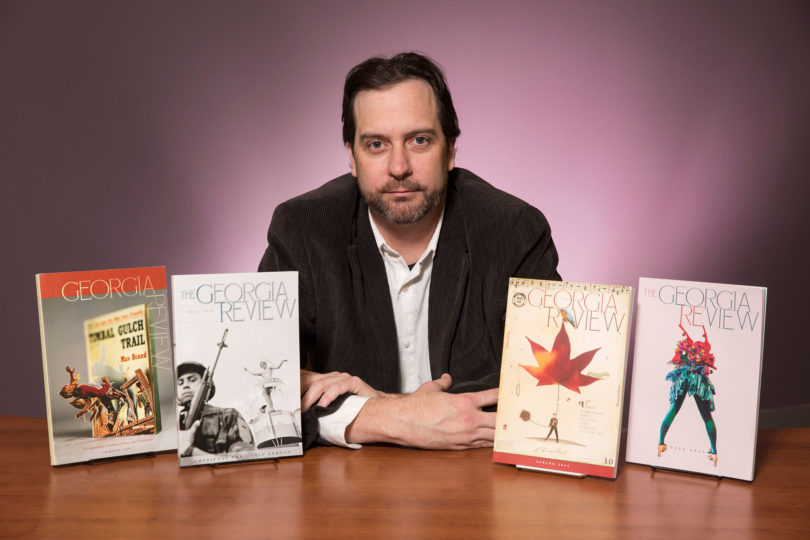 Years before he started working on campus, Scott LaClaire submitted several of his poems for publication in The Georgia Review. None was ever published, but LaClaire finds irony in his efforts now that he’s helped mold the publication during his 14 years at the literary journal.

LaClaire, the design and production manager at The Georgia Review, originally planned a career as a poet, but moved to Athens with his brother in 1994. After a few years managing Blue Sky Coffee and then working for Hill Street Press, he found himself interning at The Georgia Review.

“I really didn’t want to lose my connection with writing,” he said.

Nearly two years after his internship ended, LaClaire was called back to help out at the publication. His help eventually led to him “sliding into” the role of circulation manager.

“It was kind of a ‘right place, right time’ thing,” he said.

Shortly after that, LaClaire took over the design aspects of The Georgia Review, a role that expanded even more with the publication’s website. In his current role, LaClaire designs the quarterly issues from cover to cover. He does the layout of text and art and creates advertisements and promotional materials. He also maintains and makes design changes to the website.

While his creative writing program at Bowling Green State University didn’t cover print design, LaClaire had worked with a designer to put together a couple issues of his own literary journal before he started at The Georgia Review. That, combined with his willingness to learn, allowed him to quickly pick up both print and Web design, LaClaire said.

“The design stuff just comes naturally to me,” he said. “When I was writing, it would be more introspective, but when I’m designing, I can visualize it outwardly and put it together. It’s kind of a different process, but it’s the same in the sense that I am seeing it in my head and taking the steps to get where I want to go.”

LaClaire, who has been in his current role since 2002, said that designing The Georgia Review never feels repetitive because he’s always learning new design techniques or trying new methods. The best part of his job, LaClaire said, is looking at the final print product.

“I like seeing how it all comes together,” he said. “It’s like creating a piece of art.”

When he looks back at the first few cover designs he created, LaClaire said he cringes at the design flaws, but now he is confident and proud of the work he does.

“I take pride in the fact that if you look at the covers I’ve designed over the years, you can see the progress I’ve made,” he said. “I’m proud that I haven’t just stayed the same.”

Along with print design, LaClaire is self-taught in Web design. He said that originally The Georgia Review’s website was just about “plugging in stuff,” but now it’s evolved as his skills have grown. The publication currently is working on an updated digital edition and an app, both projects that LaClaire will play a hand in creating.

During his time in Athens, LaClaire also has learned how to use his hands for other design work—home renovations. Since the mid-2000s, LaClaire has bought, renovated and sold houses throughout town.

“When I bought my first house, I didn’t know anything about it, but I had a buddy who knows everything about everything in terms of how to deal with properties,” LaClaire said. “He helped me with the first two or three (houses), but now it’s all me.”

LaClaire admits he was never “super handy,” but that home improvement work came to him quickly. When renovating, LaClaire lives in the houses for two to three years as he fixes them up, then he sells and moves on. He’s currently on his fifth house.

LaClaire said he likes his job at The Georgia Review just as much as repairing houses since both require different tools but result in a beautiful final product.