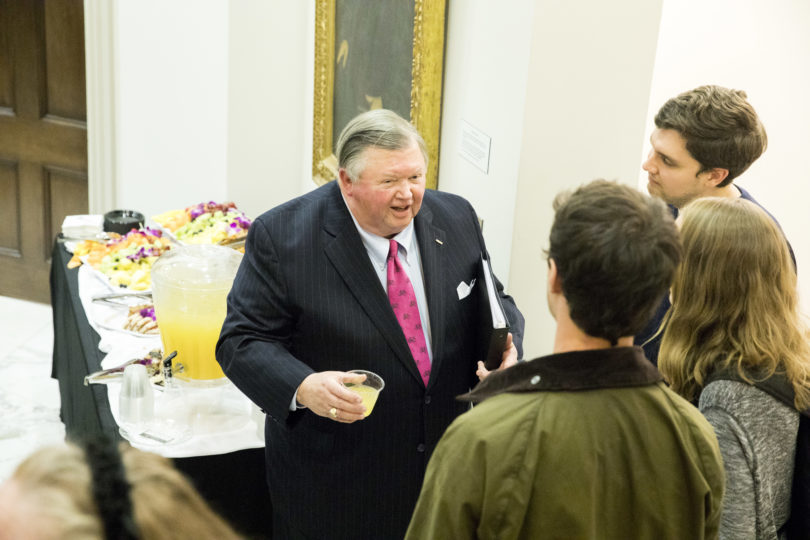 Navigating ethical decisions can be “no easy matter,” according to the Honorable Stanley F. Birch Jr., especially when it comes to the complex world of dispute resolution.

Birch delivered the keynote address Nov. 9 for UGA’s observance of Ethics Awareness Week in the Hatton Lovejoy Courtroom of the UGA School of Law.

His lecture was on the ethics of alternative dispute resolution, which is the use of mediation or arbitration to resolve a dispute instead of litigation.

Birch is a retired judge of the U.S. Court of Appeals for the 11th Circuit, where he served for more than 20 years. He is now a mediator and arbitrator with JAMS, one of the largest private alternative dispute resolution firms in the world.

Alternative dispute resolution touches most Americans even if they don’t realize it. Birch noted that people can hardly sign a phone contract or own a credit card without agreeing to waiving their right to sue in favor of arbitration.

The mediator or arbiter, sometimes called the “neutral,” in these cases must abide by ethical guidelines to ensure the proceedings are fair and thus maintain the trust of both parties. These guidelines, according to Birch, include avoiding conflicts of interest, upholding confidentiality between the parties and maintaining impartiality.

During his lecture, Birch highlighted how the state of Georgia is a national model for ethical guidelines in alternative dispute resolution.

“We are very fortunate in Georgia to have a very robust ethics system in place for arbitration and mediation services,” he said. “We should be proud of that situation.”

In conjunction with the University System of Georgia, the University of Georgia was once again a participant of International Fraud Awareness Week. In support of this week, UGA observed Ethics Awareness Week Nov. 13-17 to promote an ethical culture on campus and raise awareness about ethics resources available at UGA. The university’s Internal Auditing Division led the observance.