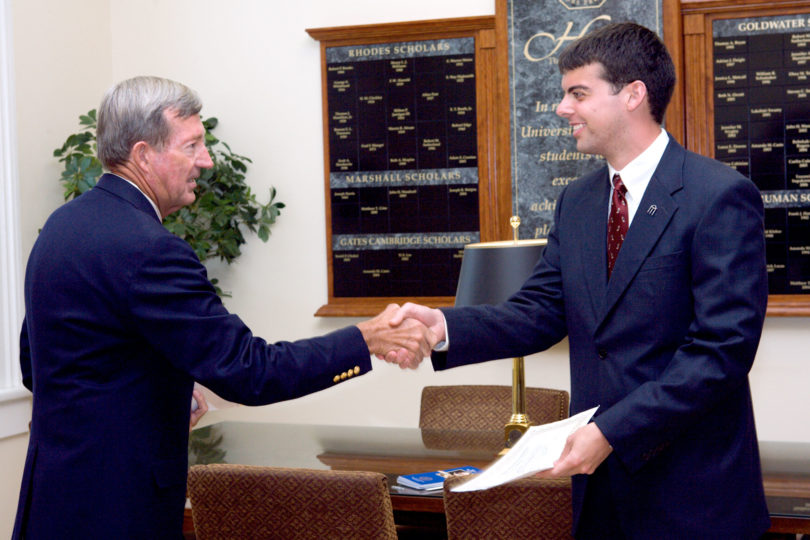 Douglas Jackson, a UGA Foundation Fellow and a 2006 Goldwater Scholar, received the J. Edgar Hoover Foundation Scientific Scholarship for the 2006-2007 academic year. He is the first UGA student to receive the $25,000 scholarship, which will support his graduate studies in analytical chemistry.

The nationally competitive Scientific Scholarship is awarded annually to one individual who demonstrates scholarly ability and leadership in a scientific field that helps law enforcement officials in their criminal investigations.

Richard Woods, the Hoover Foundation’s general counsel, secretary and treasurer, presented Jackson with the award in a ceremony on Sept. 5 in Moore College.

After Jackson’s graduation in May 2007, he plans to attend the University of North Carolina at Chapel Hill to pursue a Ph.D in analytical chemistry and develop technologies applicable to national defense.

“His interest in development of new techniques to assist law enforcement was noted, along with his work in outreach programs and receipt of numerous academic awards.”

Jackson, a senior from Round Oak, is pursuing combined bachelor’s and master’s degrees in chemistry and has been conducting research on the graduate level in the laboratory of Nigel Adams since his freshman year.

He has been a summer fellow with UGA’s Center for Undergraduate Research Opportunities, presented his mass spectrometric work at CURO’s undergraduate research symposium and serves as a student representative on the CURO advisory board.

On the national level, Jackson was one of the select few undergraduates to present their work at the national conference of the American Chemical Society and the only undergraduate presenter at the NASA Workshop on Laboratory Astrophysics.

He also has published articles in the International Journal of Mass Spectrometry and the Journal of Physical Chemistry.