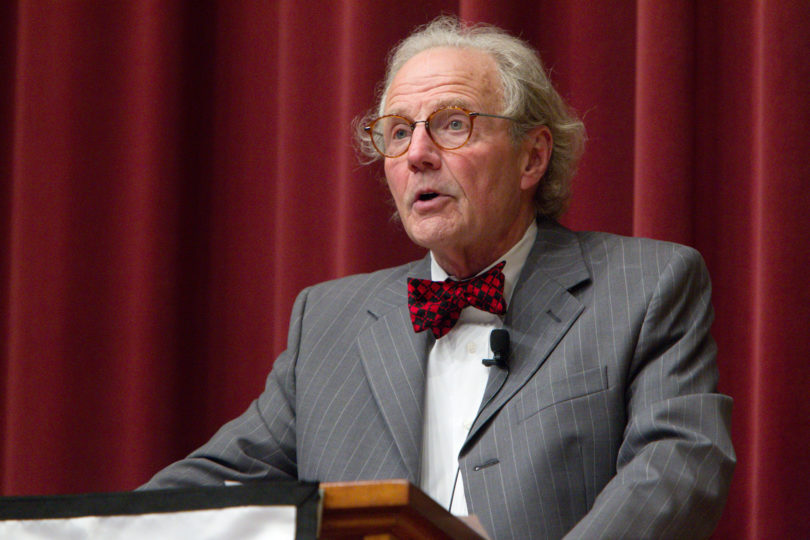 Little was left sacred at the Chapel on Jan. 30 as James C. Cobb, the B. Phinizy Spalding Distinguished Professor in the History of the American South, delivered the Founders Day Lecture, which examined Southern humor. The lecture was sprinkled with off-color jokes dealing with religion, racial tension and sexuality—all in a way to help analyze Southern history and culture­-and challenged the notion that a joke isn’t funny if it has to be explained.

Cobb’s lecture, “I Don’t ­Believe I’d a’ Told That! Understanding the South Through Humor,” covered jokes targeting everything from social and religious taboos to the region’s troubled racial history. The Founders Day Lecture, presented by the UGA Alumni Association and Emeriti Scholars, is part of the observance of the university’s 228th anniversary, whichincluded a week full of events. The lecture, now in its 11th year, recognizes the date when UGA was established through a charter in 1785, making it the nation’s first chartered public university.

Cobb, a pre-eminent scholar of Southern history in the Franklin College of Arts and Sciences, kept the audience chuckling with an insightful mix of humor and analysis.

The title of the lecture comes from a bawdy story by the late Lewis Grizzard, a famed Southern humorist and UGA alumnus. In it, church parishioners are encouraged by a pastor to confess their darkest sins. One man admits to blowing his paycheck on gambling, another confesses to adultery. Finally, one church member testifies that he had an inappropriate relationship with a goat.

To that, the preacher replied, “Damn, brother, I don’t believe I’d a’ told that.”

Told within the context of Southern society, this joke, Cobb said, suggests that “while many residents of the South may have indeed believed that God’s forgiving grace was boundless, their own (grace) definitely had its limits.”

Cobb suggested that Southern humor addresses, and makes light of, its deepest insecurities and dilemmas.

Spalding questioned whether Foxworthy, born in Georgia, and Larry the Cable Guy, a Nebraska native, really qualify as Southern insiders because of the way they “commoditize” the Southern experience through humor.