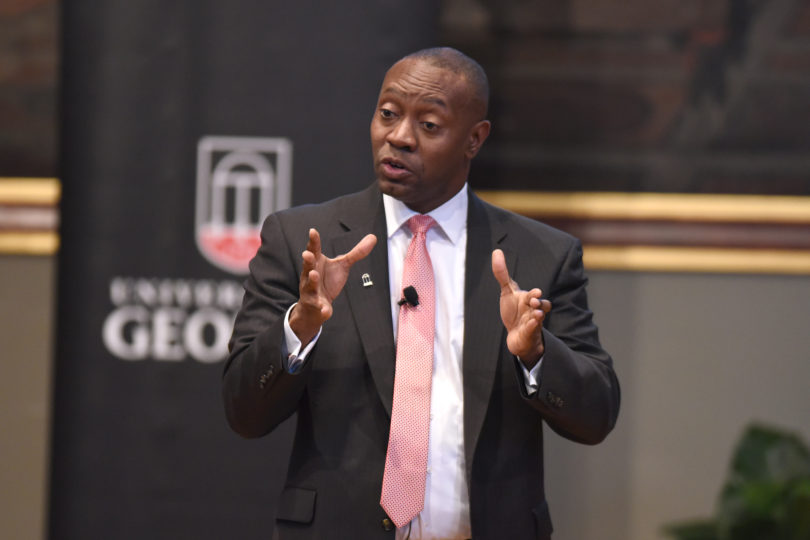 J. Marshall Shepherd knows how to communicate science to the public.

The Georgia Athletic Association Distinguished Professor of Geography and Atmospheric Sciences and director of UGA’s Atmospheric Sciences Program gets in a lot of practice as a co-host on The Weather Channel’s talk show “Weather Geeks” and regular contributor to Forbes.

But it’s something he had to learn after earning his master’s degree and doctorate in physical meteorology.

“The way we actually train scholars, and the way I learned, is very different than how we should communicate in a public forum,” Shepherd told listeners Jan. 22 at the Founders Day Lecture, the first of the university’s designated Spring 2018 Signature Lectures.

In their theses, students are taught to explain their reasoning and processes prior to conveying their conclusion. But when it comes to speaking to the public, researchers need to get to the point quickly, and they need to do so in a way that makes the information relevant to the lives of their audience.

“I have this thing I call the aunt and uncle test,” Shepherd said. “As a scientist, I try to think about if I’m conveying some information outside my scholarly circle, is my uncle going to understand in a way that is meaningful to him? Don’t throw around terms and jargon that are meaningful to the (research) community when you’re talking to a broader set of people.”

Studies have shown that the American public trusts science information more when it is communicated by scientists, Shepherd explained, and most people do “believe in science.”

Some just don’t believe in some of its findings, something that Shepherd attributes to a lack of effective communication on the part of the scientific community and a lack of scientific literacy among the general population. This combination is one of three major challenges scientists face when communicating their findings to the public. 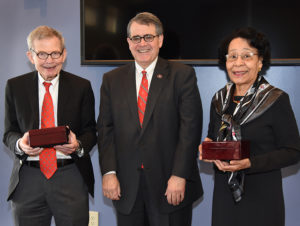 The second is that researchers have to know their audiences.

The information shared with congressional leaders in Washington, D.C., has to differ from the arguments made in a down-home restaurant because the level of audience understanding of the topic differs.

The third challenge is possibly the most difficult: Researchers have to overcome people’s perceptions and beliefs. Overcoming perception bias was one of the key difficulties faced by meteorologists during Hurricane Harvey.

“You (could) see it sitting over Houston just producing all kinds of rainfall for days, five days of rain,” said Shepherd, pointing to a satellite image. “Our weather forecast models saw that potential one week out.”

Shepherd himself wrote an article in Forbes that warned of the storm’s “one-two punch” of hitting land with Category 4 winds and then dumping massive amounts of rain. Because of previous floods, people didn’t comprehend how catastrophic the flooding would actually be.

“How do you deal with that?” he asked.

It’s a question that researchers like Shepherd continue to try to answer.