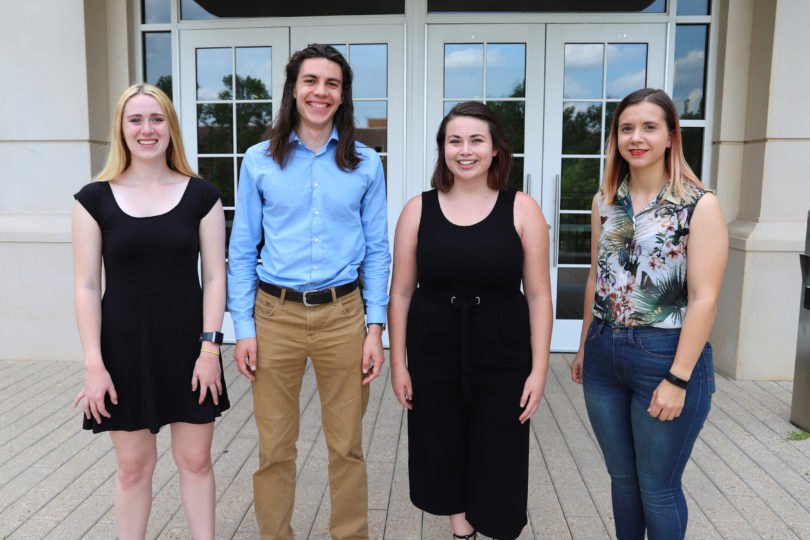 University of Georgia third-year students Monte Fischer, Mackenzie Joy, Kaitlin Luedecke and Sarah Saddoris are among 496 undergraduates from across the nation to be recognized as Barry Goldwater Scholars, earning the highest undergraduate award of its type for the fields of the natural sciences, mathematics and engineering.

The increased number of national Goldwater Scholars in 2019—more than double last year’s 211—is the result of a new partnership between the Goldwater Foundation and the Department of Defense National Defense Education Programs, which views the partnership as a way to maintain global competitiveness and security in the U.S.

“I am pleased that UGA has once again received the maximum number of Goldwater Scholarships awarded to any institution in a single year,” said President Jere W. Morehead. “The University of Georgia is proud of these four students and all they have achieved so far as undergraduates.”

Since 1995, 60 UGA students have received the Goldwater Scholarship, which recognizes exceptional sophomores and juniors across the nation. This year marks the first time since 2012 that UGA has had four recipients and the sixth time it has happened in the last 21 years.

“Individually, each of these students richly deserves recognition by the Goldwater Foundation for their hard work and research excellence,” said David S. Williams, associate provost and director of the Honors Program. “Together, they represent the strength of UGA’s undergraduate research program.”

This year, awardees were selected from a field of more than 5,000 sophomores and juniors nominated by 443 academic institutions nationwide. Each awardee will receive up to $7,500 toward the cost of tuition, fees, books, and room and board.

“The Goldwater Scholarship is a major accomplishment for these students as they build a distinguished body of work as undergraduates,” said Alan T. Dorsey, dean of the Franklin College of Arts and Sciences. “This prestigious affirmation of their abilities is a testament to our instructional capabilities across the STEM disciplines at UGA, where our faculty create a platform for young scholars to thrive.”

Fischer, an Honors student and Foundation Fellow, plans to pursue a doctorate in mathematics to investigate questions of stochastic processes, probability and computation. 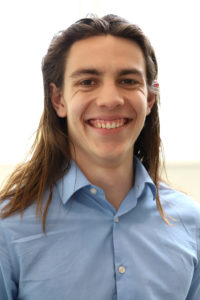 Through a summer Research Experiences for Undergraduates (REU) program at Worcester Polytechnic Institute in Massachusetts in 2018, Fischer learned how to apply tools of mathematics and statistics to model financial markets. Previously, he worked on research with UGA’s Neil Lyall and Georgios Petridis in the mathematics department in an effort to improve Plünneke’s inequality, a foundational result in the subfield of mathematics called additive combinatorics.

This summer, he will research the cost of disintermediating banks’ traditional role of creating private money at the Federal Reserve Bank of New York.

Joy, an Honors student and Foundation Fellow, plans to earn a doctorate in theoretical cosmology or particle physics, teach at the university level and support young women in physics. She intends to research the pre-inflationary universe, large-scale cosmic structure and missing pieces of the Standard Model to help build a more complete picture of the universe. 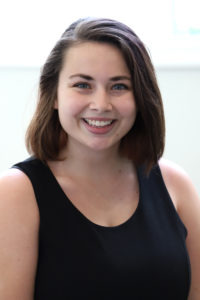 Last summer, she participated in an REU at the University of California, Davis, where she calculated the size of the sound horizon using a Markov Chain Monte Carlo to show its discrepancy with the predicted value from the Cold Dark Matter model of the universe. She was second author on a paper in the Astrophysical Journal that resulted from the research. At UGA, Joy worked with astronomy professor Loris Magnani to analyze formaldehyde spectral data from the interstellar medium in an effort to map out the clouds that surround the Milky Way.

She has presented her research at meetings of the American Astronomical Society, American Physical Society Conference for Undergraduate Women in Physics and CURO Symposium.

Joy’s additional involvement at UGA includes serving as executive director of the Lunchbox Garden Project; a math and physics tutor in the Division of Academic Enhancement; and a member of Athens Prison Tutorial, Honors’ Peer Assisted Leadership program and Palladia Women’s Honors Society. She is a competitive rock climber through UGA’s Climbing Club.

Luedecke, an Honors student and Foundation Fellow, plans to pursue a doctorate in chemistry, specializing in inorganic chemistry with a focus on carbene chemistry, and teach at a research university. She plans to develop mentorship and outreach opportunities for females in STEM at the sub-collegiate level. 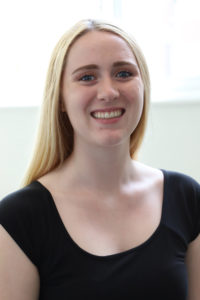 She conducts research under the mentorship of UGA Foundation Professor Gregory Robinson in his inorganic chemistry lab. She has presented at the southeastern and national meetings of the American Chemical Society, CURO Symposium, UGA’s Summer Undergraduate Research Opportunities Symposium and UGA Chemistry Club meeting and has published in the journal Dalton Transactions. She was an invited participant at the American Chemical Society’s Inorganic Undergraduate Symposium.

Luedecke’s additional involvement at UGA includes serving as the website development team lead for the chemistry department and membership in the Chemistry Club, Women in Science and UGA HEROS. Her awards include the American Chemical Society’s Undergraduate Award and Undergraduate Student of the Year and a CURO research assistantship at UGA. This May, she will study abroad in Australia and New Zealand, examining ecosystems in these countries.

Saddoris intends to pursue a doctorate in plant genetics. She is interested in the mechanisms and functions of the various pathways in plants responsible for controlling gene expression during development and in response to biotic and abiotic stresses such as pathogens and drought.

She currently works as a research technician in the laboratory of UGA associate professor and Lars G. Ljungdahl Distinguished Investigator Robert Schmitz, which focuses on plant epigenetics and epigenomics. She researches the mechanisms of histone H3 lysine 36 trimethylation in plants. She also works on a project examining the impact of transposon activity in rice, which is a collaboration with Susan Wessler at the University of California, Riverside. She has presented at Plant Biology 2018 in Quebec and the CURO Symposium, Plant Center Fall Retreat and various lab meetings at UGA. 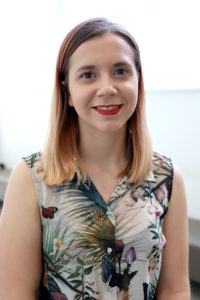 Saddoris’ path to UGA includes study at a nursing program in Germany, a semester at Greenville Technical College and three semesters at Athens Technical College. She was offered the opportunity to work in a UGA research lab and transferred to UGA in spring 2018. She is a plant biology undergraduate ambassador.

The scholarship honoring Sen. Barry Goldwater was designed to encourage outstanding students to pursue careers in the fields of mathematics, natural sciences and engineering. Since its first award in 1989, the Barry Goldwater Scholarship and Excellence in Education Foundation has bestowed 8,628 scholarships worth more than $68 million.