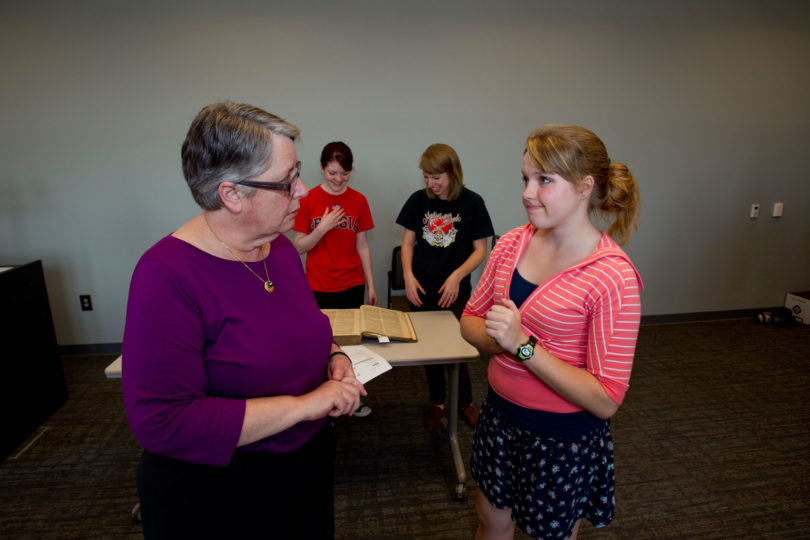 Seven minutes into class March 20, Fran Teague stopped her own lecture mid-sentence when she saw a graduate student in the back row taking notes.

“Josh, you’re going to have to take that pen and deep-six it,” she said. “You can only have a pencil-we’re in a rare books room.”

The ban on ink is just one of the differences for students enrolled in Teague’s “Theatre and Libraries” course, the first class to be taught in the new Richard B. Russell Building Special Collections Libraries.

“What a laboratory is to a scientist, a library is to a humanist,” said Teague, a professor of theatre and film studies. “Now our undergraduate humanist researchers have access to the same level of facility as their science-oriented peers do.”

The 115,000-square-foot building houses the Hargrett Rare Book and Manuscript Library, the Russell Library for Political Research and Studies, the Walter J. Brown Media Archives and the Peabody Collection.

Teague’s students spent the course’s first five weeks learning about the research tools available in the building, such archives and databases, and how to handle and effectively use rare books.

“We think of special collections libraries as being about books, but in our case, because we host the Peabody Collections especially, it also includes videos and other media,” Teague said. “Courses like this mean we get CURO (Center for Undergraduate Research Opportunities) projects, and that in turn means our students will be much more competitive nationally. These are the kids who are going to take the UGA name national.”

As a capstone, her students will turn in individualized projects influenced by their research among the special collections. The students, who range from second-years to doctoral candidates, incorporate elements of rare books, new media or political documents.

“The array of projects that we have to do here is opening my eyes to a range of things. I can do research for any class now because of the tools I learned in this class,” said Melissa Manson, a second-year theatre and broadcast journalism major. “I text my mom every week and I’ll say something like, ‘Mom I’m holding a Bible from the 1500s.’

“I’ll go to other museums now, and I’ll look at what they have on display and I’ll think, ‘Oh, I’ve handled older things than this,’ ” she added. “And that’s something I can’t get from any other classes here.”

The building’s three public galleries each include permanent and rotating exhibitions, which are laid out in traditional and modern formats-mixing new media and interactive elements alongside conventional gallery arrangement. The layouts are designed not only to pique interest and influence research, but also to effect final products of scholarly work as well, said Laura Shedenhelm, media cataloguer and Latin American bibliographer.

“Research today is becoming more and more that mix of reading and electronic elements,” she said. “When you’re quoting from a video or a television show, there’s no reason anymore that you can’t take out any portion of it, upload it and have it actually play in your paper-in the world of e-publishing and online-online journals, some of that’s already happening.”

But if the building guides research, it also strengthens it, said Craig Breaden, head of media and oral history for the Russell Library.

“This building has an archival storage and research space-most places store those materials in different places, but we hope it facilitates research and provides access to materials more quickly,” he said. “Our galleries give an idea of the depth of our materials here and represent the ‘greatest hits’ of our collections.”