Mary Ann Moran, an internationally renowned researcher whose work has created a better understanding of marine ecosystems and the roles of the ocean microbiome, has been named Regents’ Professor, effective July 1.

Moran is a Distinguished Research Professor in the marine sciences department, part of the Franklin College of Arts and Sciences, who has served on the UGA faculty since 1993. Regents’ Professorships are bestowed by the University System of Georgia Board of Regents on faculty members whose scholarship or creative activity is recognized nationally and internationally as innovative and pacesetting.

“By asking fundamental questions about the unseen microbes of the oceans, Dr. Moran has revealed insights into global processes that impact life on Earth,” said Senior Vice President for Academic Affairs and Provost Pamela Whitten. “Her commitment to discovery puts her at the forefront of her field and sets an extraordinary example for students.”

Moran’s laboratory investigates the activities of bacteria in the functioning of marine ecosystems, including how microbes interact with organic matter and how bacteria influence global carbon and sulfur cycles. Moran has pioneered the emerging field of environmental transcriptomics, where researchers are assessing the activity of genes in natural systems to provide a comprehensive view of the diversity of coastal microbial communities. 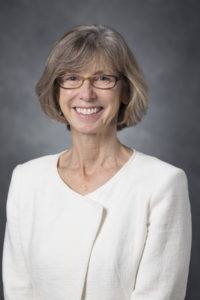 “Dr. Moran’s work is inspirational,” Virginia Armbrust, the Lowell and Frankie Wakefield Professor and director of the School of Oceanography at the University of Washington, wrote in a nomination letter. “It has transformed our view of the microbial world and the impact of these microscopic organisms on global scale processes.”

Moran’s research is supported by grants totaling $6.7 million, including awards from the National Science Foundation, the Gordon and Betty Moore Foundation and the Simons Foundation.

David Karl, the Victor and Peggy Brandstrom Pavel Professor of Microbial Oceanography at the University of Hawaii, described Moran’s extensive portfolio of published research articles as a “tour de force in the field of microbial ecology.

“Her body of work on sulfur cycling constitutes the foundation for all future research in this discipline and is well read, well appreciated and well cited,” Karl wrote in a nomination letter, adding that her work has been cited more than 1,000 times per year since 2012, placing her citations among the top of her field. “The ocean microbiome will likely emerge as a major scientific ­challenge for the next decade, and Moran is pre-positioned as an articulate spokesperson and effective leader.”

In addition to holding the title of Distinguished Research Professor, Moran is a recipient of the UGA Creative Research Medal and has been recognized for her impact on students by the UGA Career Center. She is a Fellow of the American Association for the Advancement of Science and of the American Academy of Microbiology.

“Professor Moran is an internationally recognized leader in the areas of oceanography, marine biogeochemistry, microbial ecology and environmental genomics. Her research has led to paradigm shifts in these fields, and the implications of her work are of global significance,” Daniela Di Iorio, professor and head of the marine sciences department, and Distinguished Research Professor James T. Hollibaugh wrote in a joint nomination letter.