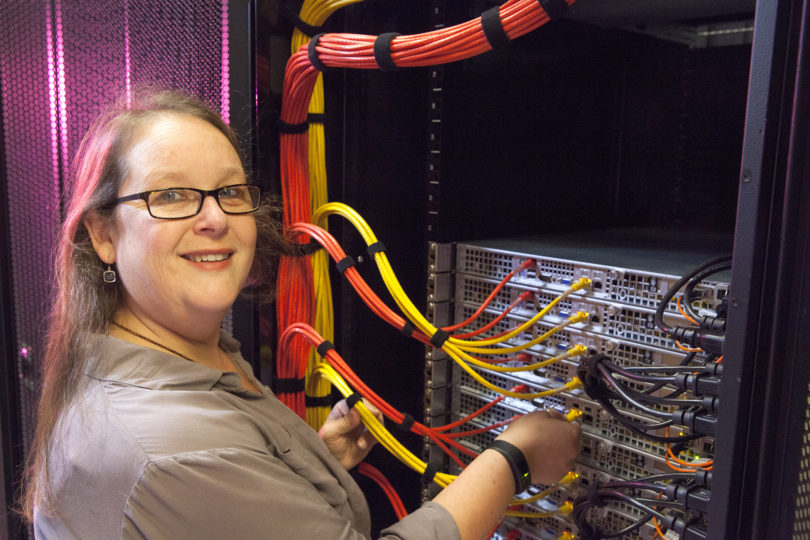 Jessica Kissinger is a molecular geneticist whose research on the evolution of disease and the genomes of eukaryotic pathogenic organisms—Cryptosporidium, Sarcocystis, Toxoplasma and Plasmodium (malaria) among them—has led her to perhaps the emerging issue among research scientists: managing data.

“To solve a complex problem like a disease, whether you’re looking for a new drug target or just trying to understand the basic biology of an organism, how it interacts with its host, you have to bring together a lot of data sets,” Kissinger said. “You want to be able to take the expertise of the community at large, with individually generated pieces of the puzzle, and then try to stitch them into a quilt that creates a better picture.”

Kissinger’s local community at UGA includes the genetics department, the Center for Tropical and Emerging Global Diseases and the Institute of Bioinformatics, where she serves as director. But her focus is the wider world of scientists and helping make the data they produce more accessible, sharable and reusable.

“So many resources go into generating some of these highly specialized data sets, with very difficult to work with and hard to culture organisms, and publishing your results doesn’t necessarily make the data usable,” she said. “I work on that usability part-taking data generated elsewhere and integrating it to help others access it and use it well.”

Making data more useful has only grown in importance in the age of big data.

“For scientists, creating archives of the publicly available data we generate is one of our biggest challenges,” said Kissinger, who had no formal training in computer science. “I had to learn how to program and manipulate data to answer my questions.”

That openness to learning has led Kissinger to become a resource for helping colleagues use their data more effectively even as she continues to sharpen her own skills.

“Using technology might allow me to connect A to B, but how should that information be presented for other researchers?” she asked. “If you really want to make something useful, you have to be able to tap into what people are visualizing and how they are communicating.”

In this vein, Kissinger, with computer science professor Eileen Kramer, has directed workshops in human-computer interactions studies around campus and across the globe. The primary integrative database that Kissinger works with is EuPathDB, one of four NIH-funded bioinformatics research centers, with 15,000 individual monthly users. Her lab in the Coverdell Center employs more than a dozen staff to work on the projects as varied as the number of questions researchers might ask about DNA sequences or protein structures.

“It’s very much a sign of the times,” Kissinger said. “When the genome of the human malaria parasite (Plasmodiumn falciparum) was published in 2000, it had taken more than five years and $35 million. Today we have more than  10,000 of them and we can do it in a day and it costs around two grand.”

As the costs have gone down and productivity has gone up, working with the data has become more complex.

As her research has expanded to include research on data itself, Kissinger is at the forefront of integrative data management programs for researchers. The Institute of Bioinformatics created the Quantitative Biology Consulting Group at UGA to help researchers on campus with the scale and quantity of the data they produce.

As part of the NIH Human Heredity and Health in Africa (H3A) program, Kissinger advises on data issues related to an “H3A-BioNet” informatics network of research groups from 20 African nations. She recently received a Brazilian Special Visiting Professor Award as part of their “Science Without Borders” program, in which Kissinger will work with South American colleagues to expand and integrate genomic tropical disease research into a database used by scientists throughout the world.