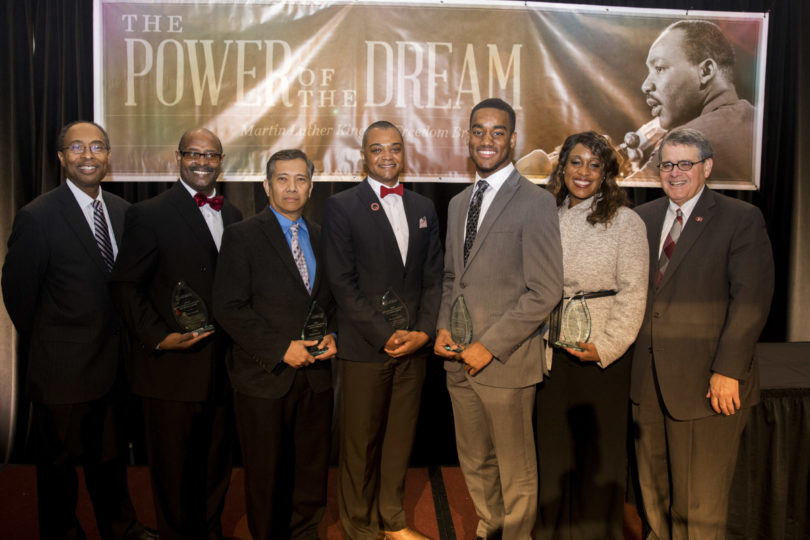 U.S. District Judge Steve C. Jones attributes some of the success he has enjoyed in his career to Martin Luther King Jr.’s fight for equality. That’s one reason he encourages people to be more understanding of the past so that they can be more appreciative of the future.

“The work and sacrifice of Dr. King changed society and helped make today possible,” said Jones, the keynote speaker for the 17th annual Martin Luther King Jr. Freedom Breakfast, held Jan. 17. “We sometimes take for granted what we have today. We think that it has always been this way, but I want to tell you that 65 years ago, we would not be sitting here like we are today. Sixty-five years ago, I would not be speaking to you today. The unity that I see here was not possible.”

Jones, who holds a bachelor’s degree and Juris Doctor from UGA, has been a longtime supporter of the university. He previously served as the president of the UGA Alumni Association and currently sits on the UGA Athletic Foundation board of directors and the UGA Foundation board of trustees.

The theme for this year’s breakfast was “The Power of the Dream: Freedom and Justice for All.” And Jones’ speech encouraged those in attendance to continue fighting for harmony and equality among all people.

“Dr. King once said, ‘The ultimate tragedy is not the oppression and cruelty by the bad people but the silence over that by the good people,’ ” said Jones. “In order to build a better world, silence cannot be part of the building process.”

Jones likened that building process to a partially built house.

“Our work is not complete,” he said. “We have the foundation, but the house is not done yet. In order to build a better world, we need people who want to become involved … [Dr. King] did not intend for us to become spectators but participants.”

Five individuals were presented the President’s Fulfilling the Dream Award during the breakfast. The award recognizes the efforts of people on campus and in the community who are actively striving to make King’s dream of racial justice and equality a reality.

As part of the program, the Clarke County School District also presented a video showcasing 10 students whose art and writing best honored King’s legacy. Among those students was a kindergartner.

“I think that everyone should sit at the same table and eat together,” said the student as he held up his drawing.