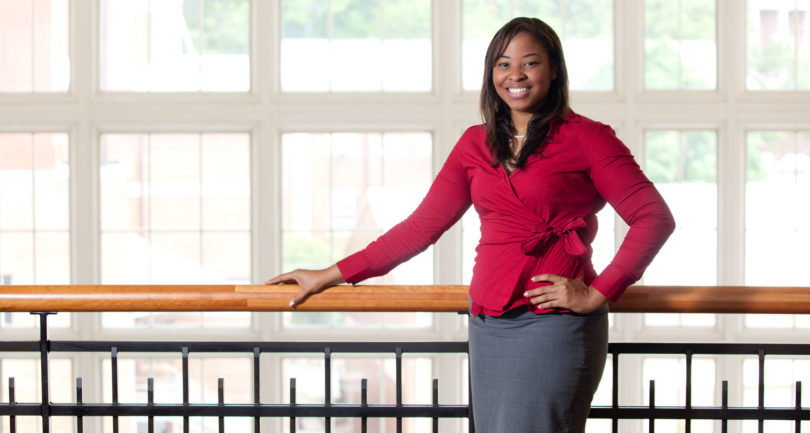 Senior Erica Holland plans on taking what she's learned in the Grady College and applying it to a career in a public relations agency or corporate communications department in South America.

When Erica Holland was a high school senior, she was recognized as a Promising Scholar by UGA’s Center for Undergraduate Research Opportunities and invited to campus for CURO’s annual spring symposium where more than 100 undergraduates presented their research.

Now as a UGA freshman, Holland is herself immersed in research as the inaugural recipient of the Donald and Louise Hollowell Apprenticeship offered by CURO, a unit of UGA’s academically rigorous Honors Program.

The CURO apprentice program pairs undergraduates with faculty mentors who guide the students as they work 10 to 12 hours per week on year-long projects in disciplines ranging from the humanities and arts to the life sciences and social sciences. The current 32 freshmen and sophomore apprentices each receive a $1,000 stipend per semester for a maximum of four semesters.

“Being involved in research is pivotal to any undergraduate’s career,” said Holland, who credits CURO as a determining factor in her decision to attend UGA. “The apprenticeships are a unique opportunity that cannot be found at many other higher learning institutions.”

The Hollowell Apprenticeship is named after the late civil rights lawyer and his wife. Donald Hollowell led the legal team that successfully fought to integrate UGA in 1961 with the enrollment of the first African-American ­students, Charlayne Hunter and Hamilton Holmes.

The apprenticeship was created for an academically talented freshman from an underrepresented minority group studying such areas as political science, journalism or criminal justice.

“The endowment of a CURO apprenticeship in the name of Donald and Louise Hollowell is a truly special development and unique honor for the student who receives it,” said David Williams, director of the Honors Program. “It serves as an important reminder for our university community of the legacy of inclusiveness and the importance of diversity represented by the Hollowells, as well as Hamilton Holmes and ­Charlayne Hunter-Gault.”

Holland, who intends to major in journalism and served as editor-in-chief of her Lovejoy High School newspaper, will work with faculty mentor Kaye Trammell, assistant professor of public relations.