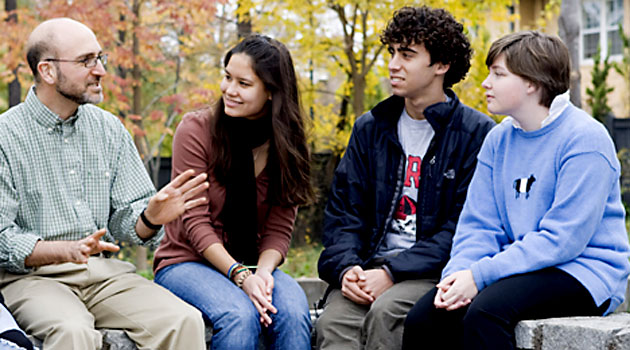 Starting university life can be both an exciting and daunting time for any incoming freshman. Through UGA’s Honors Faculty Mentor Network, first-year Honors students have the guidance and support of faculty mentors who help nurture their academic interests and career aspirations.

Since there is no prescribed method of mentoring, the faculty mentors can develop their own individual styles based on the personalities and needs of their mentees. Faculty and students can continue these relationships beyond the first year or participate in other mentoring opportunities not affiliated with the Honors Program.

“As first-year Honors students are making the transition from high school to college life, what better opportunity than having a ‘friend on the faculty?'” says Pamela Kleiber, associate director of the Honors Program, who coordinates the network. “I believe the network has become a successful initiative at UGA because of the flexible, organic structure and our commitment to help facilitate mentoring relationships that come naturally when students and faculty are given the opportunity.”

Mentee Erin Giglio says that having the chance to connect with a mentor with similar interests and a commitment to undergraduate research has helped her think of all the creative ways she can fully explore her career options. Giglio is one of four mentees of genetics professor Daniel Promislow who has been involved with the network for four years. He also has overseen the work of more than 70 undergraduate researchers in his lab during his time at UGA.

“I hope to gain another perspective and advice on what I should be doing during my undergraduate career, given the fact that I want to go on to do research eventually,” says Giglio, who is from Milton, Ga. “Dr. Promislow has been helpful so far in giving me additional information that I have not considered when thinking of a double major in genetics and psychology. Now I may try to meld both interests into an Honors interdisciplinary major or pursue a single major with a minor.”

Mentee Hank Schwartz, a molecular biology major from Marietta, says that sharing a faculty mentor with his peers has its own benefits too. “I think our group dynamic will encourage the proliferation of the mentorship,” he says. “A group offers additional support and we can encourage each other in our own pursuits as we are all going through similar experiences in the first year of college.”

On the other hand, Daniel Cellucci, a physics major from Atlanta, chose a different route in selecting his mentor, Isabelle Wallace, associate professor of contemporary art. “I wanted to choose a mentor I would never have met in my area of study but whose subject of study interested me,” says Cellucci, who may later add art and philosophy to his program of study. “In particular, Dr. Wallace’s discussion of modern art and its future intrigued me.”

Wallace says that her own experience as an undergraduate at a smaller college influenced her current mentoring philosophy. Wallace’s academic advisor was her mentor and had an open door policy for discussing academic and non-academic pursuits.

“Mentoring is an aspect of teaching I treat with utter seriousness, as it adds a necessary human dimension to the educational process,” says Wallace. “In my experience as both a student and teacher, personal contact between faculty and students is crucial to both personal and intellectual development. I feel that mentoring can make the difference between a good and phenomenal college experience.”