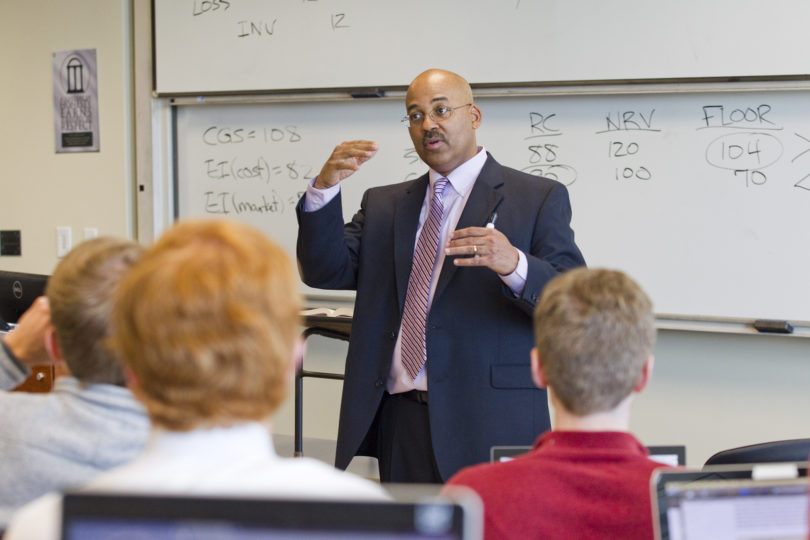 Mark Dawkins takes a lot of pride in his efforts and those of the Terry College of Business to improve diversity at UGA.

Now associate dean for academic programs and an associate professor of accounting, Dawkins served as the Terry College’s first director of diversity relations from 2004-2008.

“I think we were the first ones to actually have a formal diversity relations person,” Dawkins said. “I was happy to see Terry take the lead on that, and I give Dean George Benson credit for stepping up and saying we needed a diversity person in our college.”

Last month at the Martin Luther King Jr. Freedom Breakfast, Dawkins received a 2014 President’s Fulfilling the Dream Award for his work on diversity. He said he wished there had been time at the event for him to speak and thank those who helped him with all his efforts.

“I was very happy and pleased to be recognized, although I do think that there are plenty of people at UGA who could be recognized,” he said. “Only a few of us get recognized when really so many people are working hard.”

As director of diversity relations for the Terry College, Dawkins launched initiatives that focused on highlighting the role diversity plays outside the university.

“I’m proud that we at least shined some light on the importance of diversity from a business perspective and in a business setting,” Dawkins said. “I do think we were on the cutting edge of that. There are a lot more business schools that have diversity relations people now.”

Dawkins also worked on promoting diversity on campus through his roles in the Black Faculty and Staff Organization. He held various titles in the organization, including serving as president from 2007-2012.

“I was proud we collaborated with GLOBES and brought members from both groups together for discussions about issues that were of interest to us all,” he said. “Just to hear different perspectives was very beneficial.”

Along with providing scholarships to students, Dawkins also has pride in his role with the BFSO Listserv and annual health fair.

“We use the Listserv to promote any programs with a diversity focus,” he said. “Now we have a vehicle to get the word out about diversity efforts and initiatives on campus.”

Dawkins said he has seen “a growing appreciation and understanding of the need for diversity from an educational perspective” at UGA. Moving forward, he said, the challenge will be for the campus to better reflect the diversity of the state’s population.

“We’ve made some strides, but we still have some work to do,” Dawkins said. “From a business perspective, companies are increasingly asking those who serve them to make sure they have diverse teams. That makes it more important for the business school and the university to make sure we are doing our job in preparing a diverse pool of students to excel in a global work environment.”