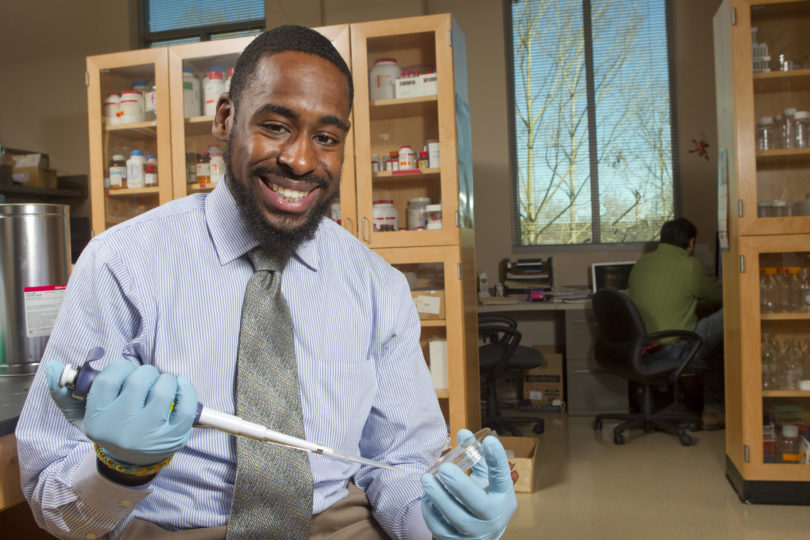 Dervin Junior Cunningham’s drive to succeed in his academic career and in helping his community comes from a determined confidence.

“I’m naïve enough to think I can change the world,” said Cunningham, a fourth-year biological science major from Albany, in explaining why he is so passionate about service and social justice.

In January, Cunningham received a 2014 President’s Fulfilling the Dream Award for his work in the Athens-Clarke County community to make Martin Luther King Jr.’s dream of equality and justice a reality.

Cunningham, who aspires to be a medical doctor and address sociological public health issues, is the co-founder of Project RAISE, a student organization aimed at increasing the retention rate of African Americans and Latinos in science.

In addition, Cunningham has volunteered with the local Boys and Girls Club, the Clarke County school system, UGA Miracle and other community programs. He also is the alumni relations chair of the Zeta Pi chapter of Alpha Phi Alpha fraternity.

“Dervin sets himself apart from others most notably by his personal practice; Dervin thinks, considers, ponders and, ultimately, acts,” said Erin Winter, a sociology instructor who has taught Cunningham. “He engages his resources—his mind, energy, networks and beyond—to actively create a more equitable world.”

The son of Jamaican immigrants, he is a first-generation college student—although his dad, also named Dervin, now is working on a theology degree.

Cunningham said he has been inspired by the hard work of his father, who has owned multiple small businesses. Cunningham worked in and even helped manage some of these businesses, including a phone store and restaurant.

As an apprentice in the university’s Center for Undergraduate Research Opportunities, Cunningham has excelled in science classes at UGA.

He credits his mentor, Carl Bergmann, with encouraging him through difficult times in his academic career and introducing him to some inspirational writings from the philosophy of Albert Schweitzer.

But during his second year at UGA, Cunningham said he and some CURO classmates looked around and saw others were having difficulty in science classes.

“Many students of color just don’t succeed in the sciences,” Cunningham said.

In response, Cunningham helped found Project RAISE as a way to build a network for minority students and to encourage success in scientific study.

He estimates about 40 students attend the monthly meetings, which feature strategies for studying science and include visits from UGA faculty, staff and administrators. Students can learn about getting involved in research projects on campus, how to get counsel from faculty and how to write résumés.

Cunningham said he hopes the program has been “an encouragement to students” and prompts them to raise their expectations for themselves.

“Optimism isn’t the cure for everything but it can really set you up for success,” he said.

Cunningham tells a story of a high school teacher who told him that if he wanted a grade of A for the class, then he should aim for getting a 100—not a 90. That optimism, Cunningham said, would help him earn a 95.

It’s this kind of attitude, he said, that motivates his fervor in promoting social justice.

“You have to be optimistic,” he said. “If I aim to change the world, I can have a bigger effect.”

When talking about social issues, Cunningham lights up.

Since working with customers and employees at his father’s businesses, Cunningham said he always has been interested in why people act certain ways.

During his collegiate career, Cunningham developed an interest in sociology as a way to understand why some people succeed or fail in their careers and why some are healthier than others based on socioeconomic status. Cunningham sees patterns of inequality that inspire him to act.

“When I started seeing things that way, it made life much more meaningful,” he said.

Whereas some might see inequality as overwhelming, Cunningham sees it as a challenge to overcome.

It makes me wonder if there are other things we can do to make this a more equal, loving and more perfect world,” he said. “If I can learn to understand those things better, maybe I can help make this world better. Maybe I can do something.