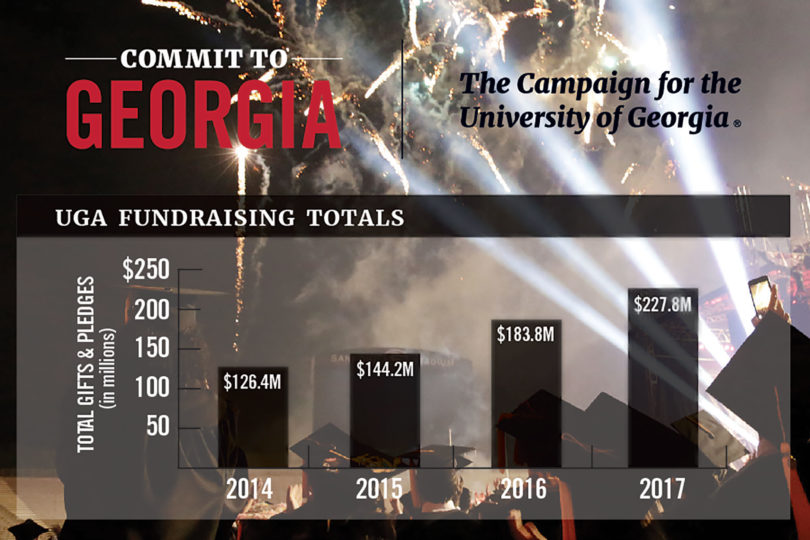 The goal of the Commit to Georgia Campaign is to raise $1.2 billion by 2020 to increase scholarship support

‘You are the inspiration of this campaign’

Inspired by UGA faculty, staff and students, donors contributed $227.8 million in new gifts and pledges in the first year of the public phase of the Commit to Georgia Campaign, setting a record in fundraising for the fourth consecutive year.

“When we launched the public phase of the campaign last fall, we called on our alumni and friends to help us expand the impact of this great university on the world,” said President Jere W. Morehead. “They are answering that call with extraordinary generosity and support because they see how hard our faculty, staff and students are working, every day, to change lives and communities.”

This marks the first time in the university’s long history that the annual total has surpassed $200 million. The unprecedented total represents a 24 percent increase over last year’s record of $183.8 million and nearly doubles the $117.2 million raised in fiscal year 2013, the year prior to ­Morehead taking office.

The goal of the Commit to Georgia Campaign is to raise $1.2 billion by 2020 to increase scholarship support, to enhance the learning environment and to solve the grand challenges facing society. More than 4,500 faculty, staff and retirees contributed this year to help the university reach an overall total of $827 million toward the campaign goal.

Private giving toward the campaign already is making a difference. Donors established 115 need-based endowed scholarships, for example, through the Georgia Commitment Scholarship program, which was introduced in the President’s State of the University Address in January. Most of these new scholarships will be awarded in the fall to incoming first-year students with unmet financial need. In addition, 10 new endowed faculty positions were established to help attract and retain the very best faculty and to support their vital research.

“We’re most successful when donors have the opportunity to hear directly from UGA students or to sit down with UGA faculty members,” said Kelly Kerner, vice president for development and alumni relations and executive director of the foundation. “It’s difficult to replicate that kind of meaningful experience.”

University officials believe that the first year of the public phase will produce the highest annual fundraising total with fluctuations up and down in the years to come. The overarching goal of any campaign is to elevate annual fundraising levels for the long-term. That is why officials are tracking the three-year rolling average—which is now 60 percent higher than FY13 at $185.2 million—to provide a better measure of sustained growth over time.

“A successful fundraising year is always exciting, especially one of this magnitude,” said Kerner. “But, I’m most proud of the three-year rolling average, which is a sign of the culture change we’re seeing around private giving at UGA. Our donors know that we are making a difference every day, and they want to be a part of the long-term impact of this special place.”

Morehead also noted his deep appreciation for the many individuals who made this significant achievement possible.

“To our donors, thank you for your unyielding loyalty and generosity,” Morehead said. “To our development team; the UGA Foundation trustees; and the leaders of our schools, colleges and other units—I remain grateful for your tireless efforts and commitment. Also, to our faculty, staff and students, you are the inspiration of this campaign and the key to its early success.”