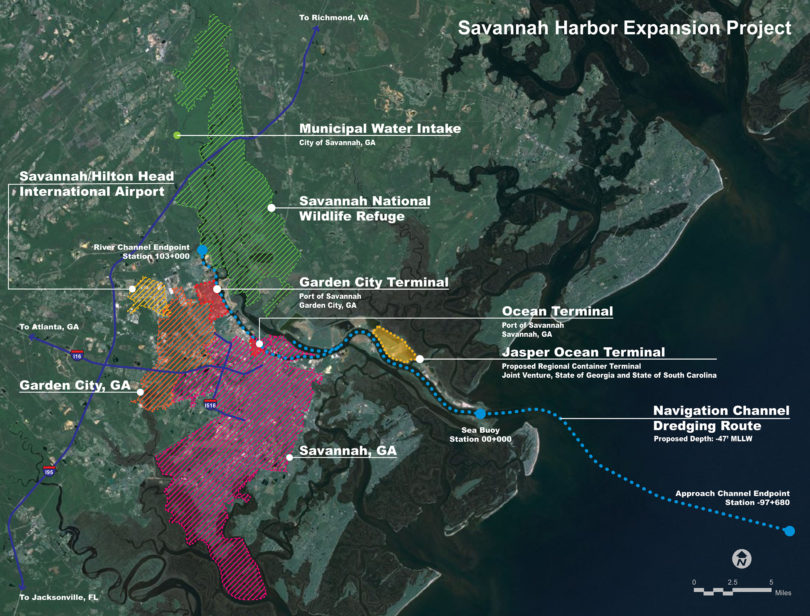 Athens, Ga. – As the $706 million Savannah Harbor Expansion Project begins, the University of Georgia and Georgia Sea Grant are poised to help coastal residents adapt to changes that are expected to bring additional jobs and prosperity to their communities.

“Most of the regional attention to the Savannah Harbor deepening has focused on the ecological effects to the river and adjacent wetland ecosystems,” said Charles Hopkinson, Georgia Sea Grant director. “We want to shift the focus to local communities so that they are prepared to handle the secondary impacts that are likely to accompany the port expansion, such as new transportation and parking needs or the school and housing needs of an expanded workforce.”

As the country’s fourth busiest container port and creator of $18.5 billion annually in personal income from port-related jobs, much is riding on the success of Savannah’s port expansion. Plans include dredging 32 miles of the harbor’s navigation channel to allow the port to accommodate supersized freighters from Asia and the Pacific coast of Latin America that will come to the east coast through the newly expanded Panama Canal, due to be completed in 2015.

“The changes will affect the entire coastal corridor between Georgia’s two main maritime ports, and we want to help each community benefit from the development,” said Stephen Ramos, assistant professor in UGA’s College of Environment and Design, who received funding from Georgia Sea Grant to conduct research and consult with the coastal communities.

During the construction phase of the project, the U.S. Army Corps of Engineers estimates that 3,700 one-year jobs will be created within Georgia and South Carolina. Ramos will investigate the best ways for communities to accommodate the temporary workforce and study whether it could translate into long-term job creation. He also will look at whether local communities need to invest in infrastructure improvements to accommodate additional truck and rail traffic. The number of cargo containers requiring transportation following the port expansion is expected to increase from 2.9 million to 6.5 million by 2030.

“All of these changes are very positive for coastal Georgia,” said Hopkinson. “We just need to make sure that our coastal communities are prepared.”

Georgia Sea Grant is one of 33 programs in the National Oceanic and Atmospheric Administration’s National Sea Grant network that enhance the practical use and conservation of resources in coastal and Great Lake states. A unit of UGA Public Service and Outreach, Georgia Sea Grant provides research, education and outreach to create a sustainable economy and environment in coastal Georgia. For more information, see http://georgiaseagrant.uga.edu.