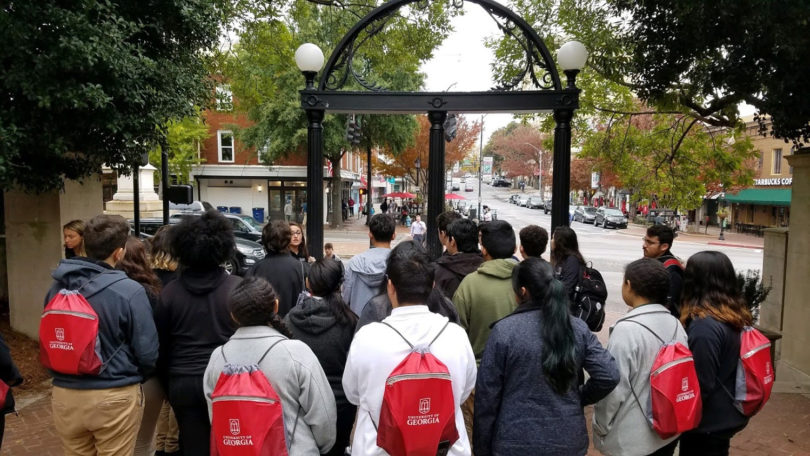 Students participated in the Gear Up 4 College program on Nov. 18, 2019. (Submitted photo)

When her twin sons, Michael and Benjamin, asked about attending a Gear Up 4 College event at the University of Georgia, LSU fan Cristy Campbell was skeptical at first. But at the day’s end, she found herself Calling the Dawgs.

“My husband and I would talk to the boys about college, but they never really asked questions before,” Campbell said. “Gear Up 4 College ignited something in them.”

Michael and Benjamin, now freshmen at Clarke Central High School, are taking advanced classes and thinking about what they want to major in. “I feel like I’ve been able to step back because they’ve taken that ownership and initiative,” Campbell said.

From scholarships to dual enrollment classes, navigating the college process can be challenging. Gear Up 4 College begins that conversation with eighth-grade students in Athens and surrounding areas, including Gwinnett, Barrow, Fulton, Habersham and Hall counties. The program breaks down admissions terminology, engages students in campus activities and explores how to begin high school with a long-term focus on education.

“College is really a family decision,” said Rosa Arroyo Driggers, UGA’s associate director of admissions. “We want to make sure that these students are not underselling themselves, knowing that yes they can succeed.”

Gear Up 4 College hosts 15 events throughout the academic year with approximately 20 middle school students at each event. During the day, program participants meet with Goizueta Ambassadors, a group of UGA students who help prepare activities, lead tours and answer questions about preparing for college.

“As an ambassador, I empathize with the students because I was in their situation,” said Melissa Flores, a second-year student studying international affairs and public relations. “Not knowing a single thing about college or how to even start considering it—that’s exactly how I felt.”

Six years ago, Flores visited UGA for the first time as a Gear Up 4 College student. “You grow up thinking that you’re going to go to a university, but that was the first time I was able to actually experience it. I could visualize life in college, and I realized I could be a student here or any university I wanted,” she said.

For many students like Flores, Gear Up 4 College is their first tangible introduction to higher education. “After the program, my boys really understood the value of college and felt like it was something that they could achieve in their own right. They had the support of a college and the credibility that comes from people who live and work there,” Campbell said.

The Gear Up program covers topics such as essay writing for applications, courses to consider while in high school, and what it means to attend a public, private or technical school. “We only have five or six hours to make an impact, so we really take it seriously,” said Jonathan Brunson, assistant director of outreach with UGA’s undergraduate admissions. “The kids go back to school with a different attitude. They’re more motivated, the teachers see the difference, and their parents see the difference. That’s how we know we did our job.”

For Campbell, seeing her sons succeed has been the most rewarding outcome. “Regardless where they attend after high school, watching them put forward the effort and take it seriously is exciting. I think they know that if someone has their back, they’ll thrive.”