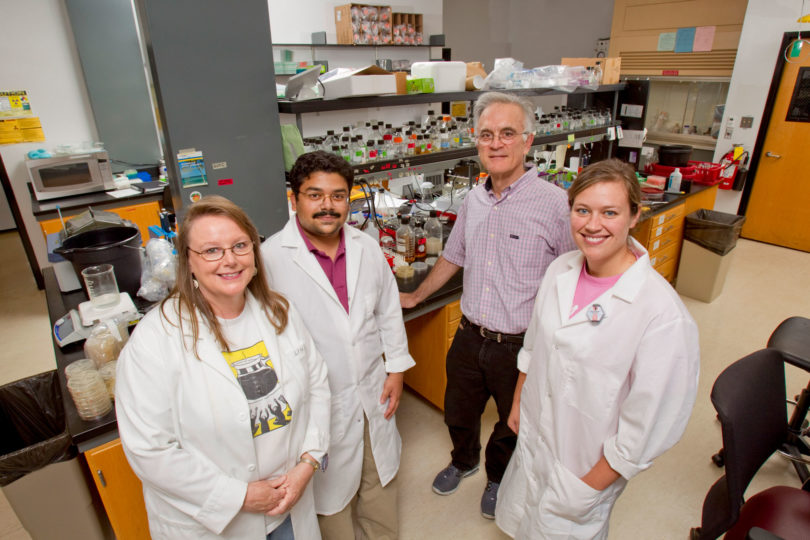 With his discovery of a new class of molecules that put the brakes on the movement of so-called parasitic DNA, UGA researcher David Garfinkel raised several questions that have yet to be answered: Namely, how do these molecules work and, more broadly, what can they tell us about how cells handle assaults from viruses such as HIV and conditions such as macular degeneration?

Now, with a $1.13 million grant from the National Institutes of Health, Garfinkel, a professor of biochemistry and molecular biology in the Franklin College of Arts and Sciences, is exploring how molecules known as antisense RNAs inhibit the movement of transposons.

“Upwards of 40 percent of the content of our chromosomes are transposons, and we don’t understand much about how they attain that copy number and what roles they play in normal genome function as well as when things go awry,” Garfinkel said. “Those are the kinds of fundamental questions that I’m interested in.”

The transposons that Garfinkel studies make additional copies of themselves and insert those copies throughout the genome. These “jumping genes” are often thought of as genetic parasites, but Garfinkel pointed out that they actually benefit the host in some cases. By giving cells new combinations of genes and forms of gene regulation to work with, for example, transposons allow them to quickly adapt to changing conditions. And unlike retroviruses such as their pathogenic cousin HIV, which also makes copies of itself and then inserts them into its host, transposons generally leave their hosts unharmed and intact.

Garfinkel studies what are called Ty1 retrotransposons in baker’s yeast, an organism that has the same basic cellular machinery as more complex forms of life, humans included, yet is much easier to work with and better understood. Within cells, DNA is transcribed into messenger RNA, which is then translated into proteins that do much of the work of cells. In a study published in 2009 in the journal Proceedings of the National Academy of Sciences, Garfinkel and co-author Emiko Matsuda of the National Cancer Institute showed that Ty1 produces non-coding antisense RNAs that poison at least one transposon protein, thereby preventing the element from making its genetic leap.

Although yeast lacks the RNAi genes, the reliance on non-coding RNAs to inhibit element propagation remains intact. However, in conditions such as macular degeneration, a leading cause of age-related blindness, the RNAi protein known as dicer that is supposed to keep cells healthy goes AWOL.

Garfinkel, who came to UGA after a 25-year career with the NCI, said the grant also creates opportunities for ­collaborations with other labs on campus. His team is primarily concerned with the molecular genetics of the antisense RNA, but he’s also interested in understanding how the molecule binds to proteins or other targets in the cell.

“We’re on the leading edge of discovery here, so there isn’t a huge set of precedents we can simply plug our work into,” Garfinkel said, explaining that the role the antisense RNAs might play in other organisms is still unclear. “We’ll just have to work hard, and wait and see whether this new form of RNAi appears elsewhere. Given that budding yeast is a powerful model for understanding fundamental cellular processes, I suspect what we discovered will be found in other organisms.”