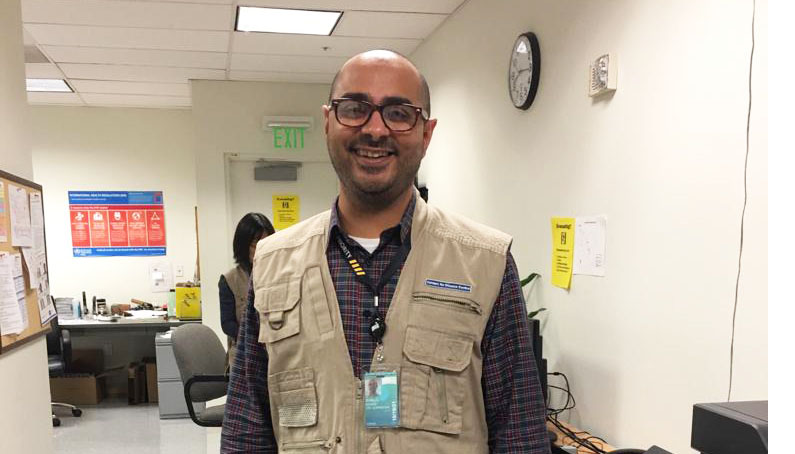 In the early days of the COVID-19 pandemic, part-time UGA professor and full-time CDC staff member George Khalil DRPH '15 risked his own health to screen airline passengers returning to the U.S. from abroad.

In the two months since George Khalil’s first deployment, the situation had drastically changed.

The part-time UGA professor has a full-time desk job at the Centers for Disease Control and Prevention in Atlanta, but when the organization started buzzing with news of a novel coronavirus that was bound to hit the States, Khalil DRPH ’15 knew he wanted to be on the ground. He volunteered to deploy to San Francisco International Airport, where the CDC had employees quizzing passengers flying in from Wuhan (and later all of China) about possible symptoms.

The goal was clear. “We didn’t want it coming into the country at all, not even one case,” says Khalil, who teaches in the College of Public Health’s doctoral program. But by his second deployment a month later, it was clear that not only was the disease already in communities across the country, it was spreading.

This time, he went to Boston Logan Airport, outfitted with an N-95 mask, a face shield, and a medical gown. Khalil spent eight years as an EMT before joining the CDC, so chatting up ill passengers wasn’t entirely foreign to him. What was new was the fear of catching what the passengers had.

“[The CDC] is honest with us—we’re in high-risk jobs,” Khalil says. “We’re seeing sick people. But honestly, our risk is probably the same as going to the store now.”

All the CDC volunteers were extra sensitive to developing symptoms of their own, and the atmosphere of the airport was noticeably different than January in San Francisco.

The first time, nobody departing a plane wore a mask. The second, almost everyone was masked. Flights were few and far between. The CDC called the volunteers back from Boston after a week, cutting short what was scheduled to be a month-long deployment.

Khalil spent the next two weeks at a hotel, waiting to see if he’d develop symptoms. He didn’t and was able to head home toward the middle of April.

Even after getting back, he felt like he hadn’t fully processed the experience. He’s been fielding 10 to 15 calls a day from people asking for advice, which he’s happy to give. And he’s jumped back into his role as a mathematical statistician at the CDC.

But COVID-19 is never far from his mind.

The refugee-focused nonprofit he founded, Route 78 Coffee Company, is donating all proceeds from its coffee sales to Ethnē Clinic in Clarkston. The nonprofit clinic serves a large refugee population and aims to treat patients’ physical and mental health, as well as their spiritual needs. When the coronavirus hit the Atlanta suburb, the clinic partnered with the city to provide free drive-through testing for community members. But like other health care facilities across the nation, personal protective equipment was in short supply. In addition to helping raise funds to purchase PPE, Khalil also reached out to the UGA College of Engineering to secure some of the medical face shields the college produced.

“I want to help,” Khalil said. “I don’t want to sit at my desk and watch the world collapse.”