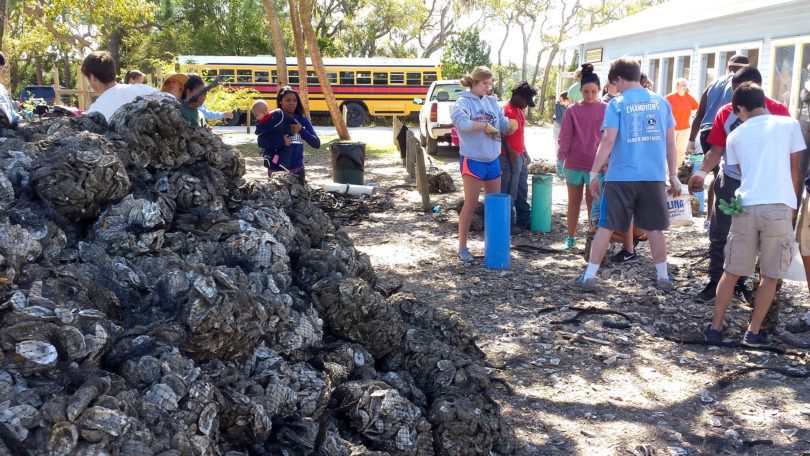 Tybee Island, Ga. – This summer, Georgia 4-H is recruiting an army of oysters to help ensure the future of the organization’s coastal environmental education center.

Georgia 4-H, which is part of University of Georgia Cooperative Extension, is working with UGA Marine Extension to encourage new oyster beds along the marshy shoreline at Burton 4-H Center on Tybee Island.

In early April, dozens of volunteers spent a Saturday morning filling bags with oyster shells. These bagged shells will be placed along the shoreline to create a new habitat for wild oysters and to spur the creation of new oyster reefs along the marsh’s edge.

“A couple of years ago, we realized that the Horse Pen Creek was encroaching on most of the buildings at Burton 4-H Center,” said Arch Smith, director of Georgia 4-H. “We began working with engineers to develop a solution to reduce the erosion of the creek bank and settled upon a solution that adds an educational component as well.”

Building the living shoreline will provide an opportunity for 4-H environmental education program instructors to use it as a teaching tool for the 8,000 students who visit Burton 4-H Center annually to study coastal habitats and issues. Burton 4-H Center is one of five facilities operated by Georgia 4-H that provides environmental education programs.

The process of designing and gaining permitting approval for the living shoreline project started more than a year ago. The project will likely take several years to be fully stabilized as a natural oyster reef, said Mark Risse, director of UGA Marine Extension.

Volunteers packed discarded oyster shells, a byproduct of the seafood industry, into perforated Naltex, which are marine-safe plastic bags. Coastal Civil Engineering will then pack these bags onto the shoreline. The old shells will create the skeleton for a new oyster bed, which looks like a mound of oysters protruding from the marsh’s muddy bottom.

Eastern oysters, which are native to the estuaries on the Georgia coast, reproduce in the summer. The bags of shells will serve as a scaffold and habitat for these young oysters, called “spat.”

The goal is to have all of the bags of oyster shells in place in time for this year’s spat to find their new home.

“We wanted to get the shells out there as soon as possible so that the spat could settle into the new habitat,” Risse said. “It’s usually two or three years down the road before you get a fully established oyster reef. You’ll see the bags this summer, but hopefully, by winter, you’ll see new oysters setting up along the tops. In two or three years, you won’t see the bags at all.”

An oyster reef can provide a habitat for 70-80 species of aquatic animals and helps to increase the quality of estuary waters.

“We’re putting out a habitat and a food source that’s going to house and feed other species,” Risse said. “Also, oysters will respond to sea level rise. Oysters will be able to move up with the water level, where a bulkhead would just be swamped.”

Georgia 4-H is building the shoreline with support from UGA Marine Extension, Georgia Sea Grant and the UGA Office of the Vice President for Public Service and Outreach. Coastal Civil Engineering was hired by Georgia 4-H to develop construction documents. The Carl Vinson Institute of Government, The Nature Conservancy, the Five Star and Urban Waters Restoration Grant Program and the City of Tybee Island are supporting this project.