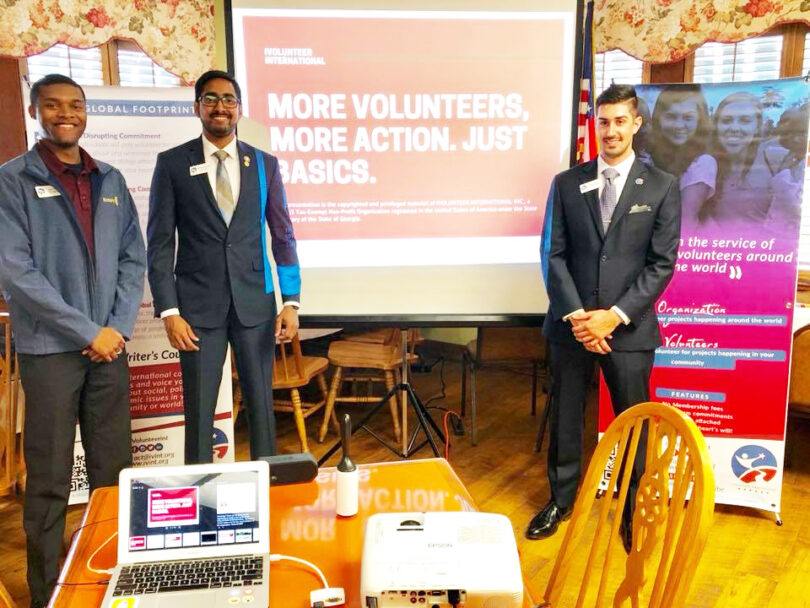 His commitment to public service is being felt around the world

University of Georgia graduate student Nipuna Ambanpola has engaged in public service since he was a child in Sri Lanka. In 2017, he created an online nonprofit organization to link volunteers around the world to projects in their local communities.

Here in Athens during the pandemic, Ambanpola used the same technology to create GroceryAid, which connects Georgia residents at high risk of the virus with volunteers who can grocery shop for them.

“Volunteerism has always been a major part of my life,” said Ambanpola, a graduate student in the UGA School of Public and International Affairs and a graduate assistant with the J.W. Fanning Center for Leadership Development, a UGA public service and outreach unit. “When I came to Georgia, I found that most volunteer opportunities were led by organizations on campus or in the community. I started thinking about a way to help people identify volunteer opportunities no matter where they are, making it easier for them to get involved in their communities.”

The Georgia Chapter of Blue Key recognized Ambanpola by naming him the winner of the 2020 Tucker Dorsey Award during a virtual ceremony on Oct. 23. The annual award, which includes a $750 scholarship, goes to students whose leadership, dedication and ideals reflect those of Tucker Dorsey, founder of the Blue Key Awards Banquet.

Nipuna has a servant’s heart. He is absolutely the most effective student leader I have ever known and perhaps the most deserving recipient of the Tucker Dorsey Award.” — Jennifer Frum

Dorsey was an outstanding student leader dedicated to UGA, its heritage, its tradition, its ideals and its goals. He exemplified the quality of mind and spirit that the university seeks to cultivate through a well-rounded education. Ambanpola is the 2020-21 vice president of Georgia Blue Key.

“Nipuna has a servant’s heart,” said Jennifer Frum, UGA vice president for public service and outreach, who nominated him for induction into Blue Key earlier this year. “He is absolutely the most effective student leader I have ever known and perhaps the most deserving recipient of the Tucker Dorsey Award.”

“Nipuna is exceptional at combining his creativity with service, and he looks for ways to join with others at every opportunity,” Keen said. “Servant leadership is his calling.”

He launched his international online nonprofit organization, IVolunteer, in 2017 before coming to UGA. Since then, more than 6,000 volunteers have connected with over 200 projects through IVolunteer International.

He got the idea for GroceryAid from Shopping Angels, an organization created during the COVID-19 pandemic to shop for residents of Nevada and other states who were deemed expecially at-risk of the virus.

“Once I saw what they were doing, I felt like we could use our technical expertise to build a platform for Georgia,” Ambanpola said. Shopping Angels “agreed and supported our efforts.”

“Putting this together has definitely been a community effort.”

GroceryAid went live in late April and has since had 158 volunteers in Georgia sign up to participate.

IVolunteer International is growing in other areas as well. The organization is developing a social impact mobile app for release later to complement its online efforts and make it easier for people to sign up. The UGA Kickstarter Fund awarded the organization $5,000 to support the app’s development.

“My involvement at the Fanning Institute allows me to explore and learn the true breadth of the public service industry,” Ambanpola said. “The skills I gain from my Fanning experience directly contribute to the way I sustain and grow IVolunteer International.”

For more information on GroceryAid go to  https://groceryaid.ivint.org/. To learn more about IVolunteer International, visit www.ivint.org.