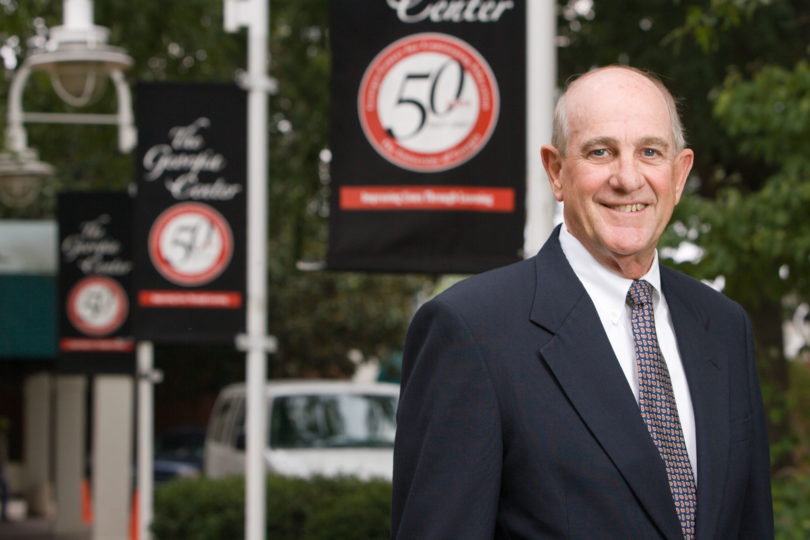 Before coming to UGA four years ago

Robert Leiter is retiring next month after serving four years as director of the Georgia Center for Continuing Education Conference Center and Hotel.

“Bob has provided extraordinary leadership for the Georgia Center during the past four years,” said Art Dunning, vice president for public service and outreach.

“Because of his superb combination of action and thought, the center now ranks as one of the top university conference centers in the nation.”

But unlike some above-the-fray corporate officers, Leiter inserts himself directly among the center’s nearly 500 employees. Anyone walking  100 yards with him will hear a multitude of  greetings doled out to everyone he knows—and he knows everyone.

“He is constantly on the go making things happen. Since he’s been here, the Georgia Center’s really taken on some of his personality, and that’s been a great benefit,” said Brad Cahoon, associate director of distance education at the Georgia Center.

This fits into what Leiter said was one of the center’s greatest accomplishments during his tenure: A renewed commitment to customer service.

Modeled after a program honed by the Ritz-Carlton luxury hotel line, Leiter’s push toward “service excellence” helped earn him the 2007 Louis Griffith Hospitality Leadership Award  from the Athens Convention and Visitor’s Bureau and cemented the center’s reputation as a top-flight institutional resource.

“I think several things we’ve done here have made a difference, but what it all comes down to is the people. They make it happen,” Leiter said.

“I’ve described this job to the president and the provost as the capstone of my career,” Leiter said. “I fully believe in the concept of lifelong learning and continuing education. I believe it’s a fundamental part of any major university, and when the opportunity came to come here, it was such a premier program in the country and had such renown, I was happy to be a part of the tradition.”

A search for his successor is under way.

“I will miss a great number of things, such as the UGA campus atmosphere, which has a wonderful environment teeming with educational and cultural opportunities and working with the people here daily,” Leiter said.