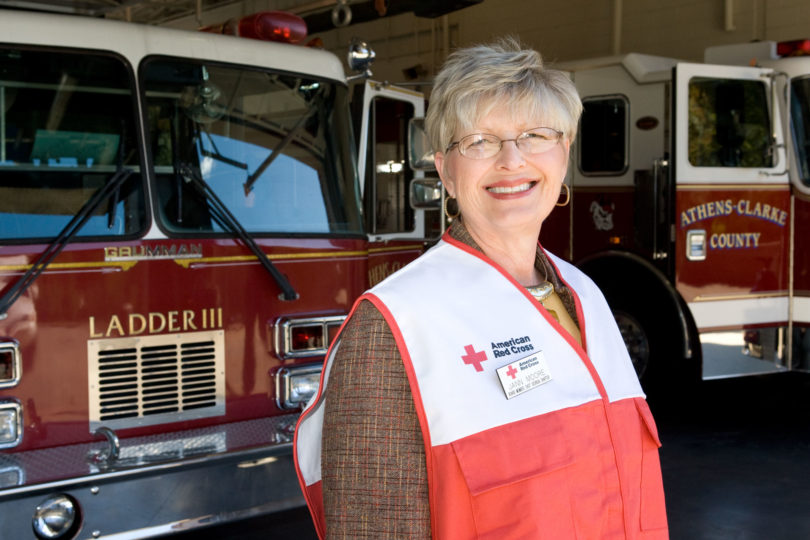 Jann Moore volunteers with the East Georgia chapter of the American Red Cross. In November

Moore, a human resources manager at the Georgia Center for Continuing Education Conference Center and Hotel, volunteers with the East Georgia chapter of the American Red Cross and has witnessed firsthand the devastation a fire can cause. She’s seen families in shock after watching all their possessions go up in flames and has been there to lend a helping hand-or phone call as the case may be.

Moore, along with other Red Cross volunteers, makes sure the families are completely taken care of for the next 48 hours, so they make calls to arrange hotel rooms, food and clothing for the families-all while still close to the scene of the fire.

So every time Moore hears a fire truck, she wonders how severe the fire was and if anyone was hurt. But at the same time, she’s optimistic because she knows someone with the Red Cross will be there helping.

The East Georgia chapter of the American Red Cross is one of many charitable organizations benefited by UGA’s annual Campaign for Charities, which runs through Dec. 19.

Moore said she originally got involved with the local chapter of the Red Cross six years ago when a friend, who was director of the organization’s board, asked for her expert help in dealing with human resources. She started serving on the chapter’s human resources committee, helping with forms and making sure enough funds were raised for all of the chapter’s counties, employees and 1,000 volunteers. Her involvement grew to include helping out with thank-you breakfasts for the volunteers who staff the UGA football games and being on-call evenings in case fires break out.

For the past four years, Moore has been one of the chapter’s board members. Moore said she loves working with the Red Cross and can’t wait until she’s retired and can devote her efforts full time to helping those in need.

“I love it because it’s helping people at a time that they need the most important help in their lives,” she said. “It’s volunteer work. You don’t get a cent for it. You just feel like it’s a good use of your time and you’re helping people.”

In addition to volunteers, Moore said the chapter is always in need of funds, as they get no government funding and rely completely on donations.

“Like all charities, this is not the best year to get funds because people are having their own economic problems, and so fundraising is really down,” Moore said. “People just don’t have the extra money to give. But, it’s so important to be able to raise the money to be able to take care of each victim who’s been involved with a fire.”