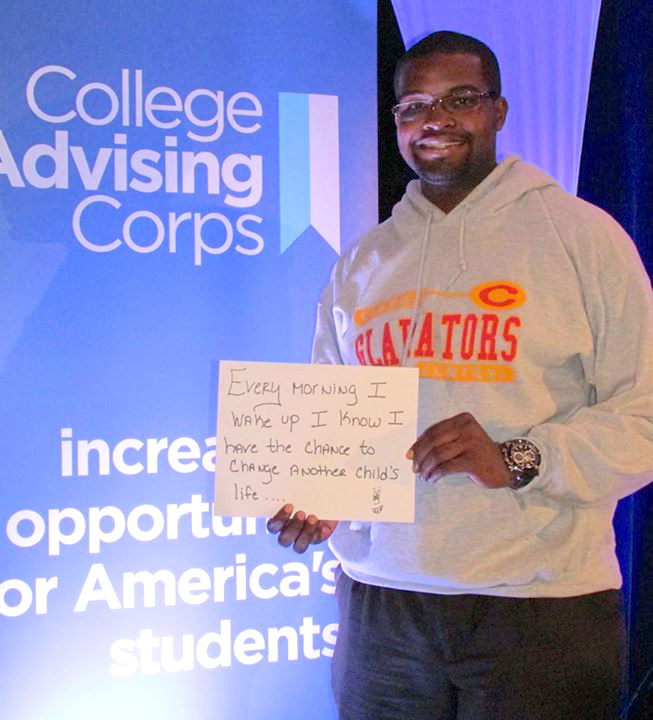 Georgia College Advising Corps member Lawrence Harris said he was honored to be invited to the White House earlier this month for a summit on college access. He was in complete disbelief, however, when President Obama recognized him by name in a speech on the power of higher education to transform lives.

“I was just as surprised as anyone,” said Harris, a college adviser at Clarke Central High School in Athens through a program sponsored by the UGA Institute of Higher Education and part of the national College Advising Corps.

“Lawrence went to the University of Georgia, and like a lot of first-generation college students it wasn’t easy for him,” Obama said. “He had to take remedial classes. He had to work two part-time jobs to make ends meet. At one point, he had to leave school for a year while he helped support his mom and his baby brother. Those are just the kinds of day-to-day challenges that a lot of these young people with enormous talent are having to overcome. Now, he stuck with it. He graduated.

“But now he’s giving back,” Obama said. “He’s made it his mission to help other young people like him graduate, as a college adviser at Clarke Central High School in Athens, Ga. And today the National College Advising Corps, the program that placed Lawrence in Clarke Central, is announcing plans to add 129 more advisers who will serve more than 80,000 students over the next three years.”

The program, which was established in Georgia in 2008, has a track record of success. Schools served by the program see an 8-12 percent increase in college-going rates, and Advising Corps partner high schools see an average increase of $1 million in additional scholarships per school for their college-going students. In 2013, the GCAC added 12 advisers following a $1 million grant from the Robert W. Woodruff Foundation and now serves 16 Georgia high schools. Nationally, the College Advising Corps is poised for growth.

Harris said that after the speech he was invited backstage, where he met with Obama and first lady Michelle Obama. They spoke for about five minutes, and Lawrence told the president that although there is often a stigma surrounding low-performing students, many times they just need someone to listen, inspire and guide them.

“They both told me they were proud of the work that I do and to keep it up,” Harris said.