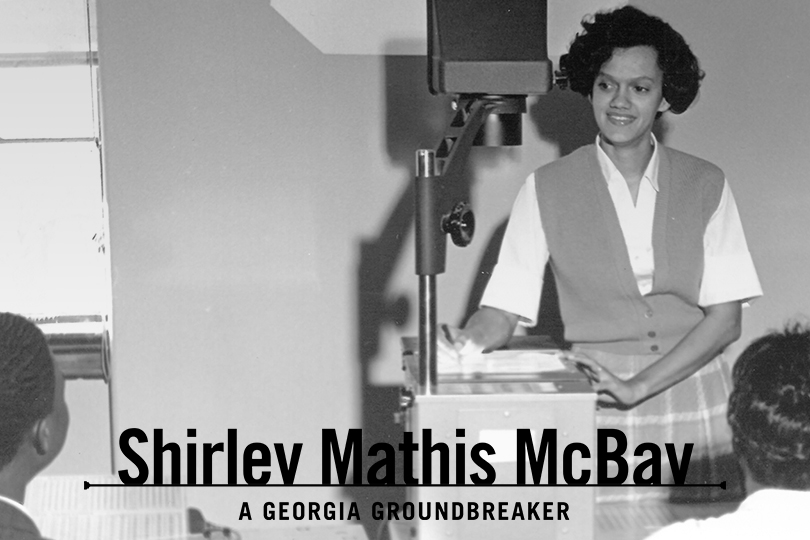 This story is part of a series, called Georgia Groundbreakers that celebrates innovative and visionary faculty, students, alumni and leaders throughout the history of the University of Georgia – and their profound, enduring impact on our state, our nation and the world.

It’s been over 30 years since Shirley Mathis McBay first went to Capitol Hill with an urgent message.

She implored members of Congress to take action to increase the numbers of minorities and women in the fields of science, technology, engineering and math. And she didn’t mince words.

“In the search for knowledge in science and engineering, the worst intellectual crime one can commit is to prejudice one’s results, to prejudge how something will turn out. However, this is precisely what we are doing when we fail—from elementary school to graduate school—to encourage women and minorities to enter the fields of science and engineering,” McBay told the congressional panel, titled “Reclaiming Human Talent.”

At the time, she was MIT’s dean for student affairs and chair of the National Science Foundation’s committee on equal opportunity in science and engineering. A few years later, she’d launch the Quality Education for Minorities Network, a nonprofit dedicated to improving education for underrepresented students throughout the country.

She knew firsthand the difficulties facing African Americans who aspired to pursue advanced degrees. She earned her doctorate in mathematics from the University of Georgia in 1966, just five years after the university was desegregated. And she’d previously earned master’s degrees in math and chemistry from Atlanta University (now Clark Atlanta University). But it wasn’t an easy journey.

“What we are doing is limiting the expansion and development of America when we place limitations on the expansion and development of these Americans,” she told the congressional panel in 1987. “… We must realize the talent we are missing when, as in 1985, women received only 6% of the U.S. doctorates in engineering, or when, that same year, only seven Blacks in this entire nation received a doctorate in mathematics.”

It wasn’t the first and definitely wouldn’t be the last time McBay would publicly call for addressing continued disparities between the quality education most white children in America were receiving in their public school systems and that of the subpar schools that dominated in predominantly minority neighborhoods. In fact, she’d address Congress again just a few years later as head of the QEM Network, emphasizing the connection between impoverished areas and poor educational resources available there. And in the National Urban League’s State of Black America address, she argued for the need of a national “will and commitment to do what is right for all children.”

Her unyielding determination to expand opportunities for minorities and women in fields where white men were the norm would define McBay’s career and her legacy.

Born in Bainbridge, Georgia, in 1935, Shirley Mathis was no stranger to adversity. 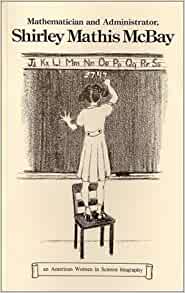 Shirley McBay is featured in American Women in Science, a series of biographies that show how young girls overcame barriers to achieve successful careers in science, math and engineering. (Submitted photo)

She was something of a child prodigy, constantly on a mission to learn something new, according to her profile in the American Mathematical Society. And she found her niche in mathematics and science.

But being clever and a bit of a bookworm doesn’t always win you friends, especially when you’re 10 years old and competing against high schoolers in a math contest.

A contest that the grade schooler won.

Despite the teasing from classmates, Shirley Mathis pressed on, graduating from high school at only 15 and earning her bachelor’s in chemistry four years later. She started teaching at Spelman College after graduating. During this time, she also pursued master’s degrees in chemistry and math at Atlanta University, where she met her future husband, Henry McBay.

A renowned chemist and educator in his own right, Henry McBay taught chemistry at Morehouse College. Shirley Mathis took one of his courses and found her interest in the subject had grown even more.

But the subject wasn’t the most practical for her new life. She and McBay had married, and she had a baby and realized chemistry meant hours spent in the lab—hours she’d rather spend with her family.

So she switched over to her other love, mathematics. 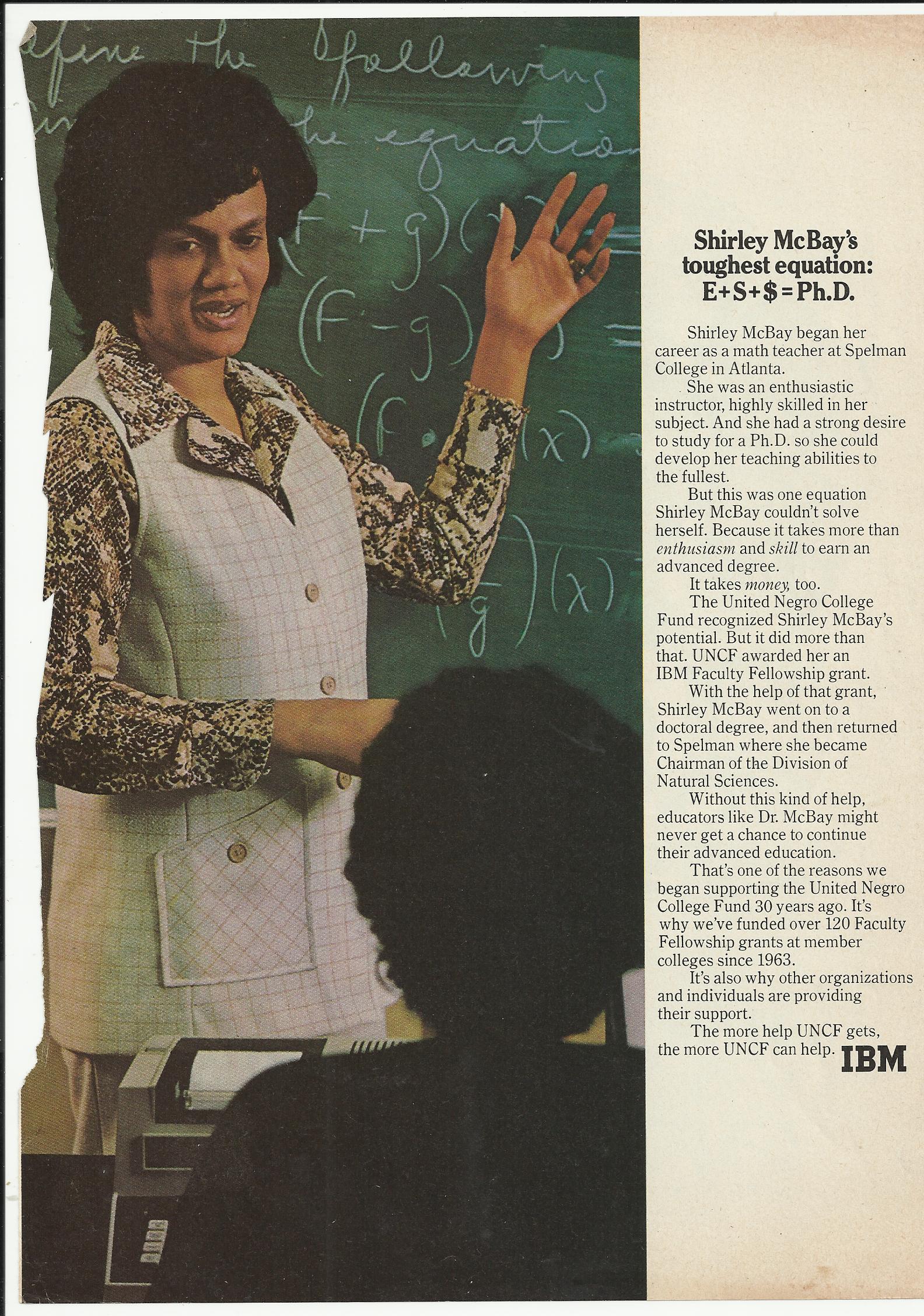 A scholarship from the United Negro College Fund helped Shirley McBay pursue her doctorate at the University of Georgia. (Submitted photo)

Now Shirley McBay, she began working toward her doctorate at the University of Chicago. The McBays highly valued education and were extremely supportive of her studies. In fact, her husband’s mother cared for their son Ron from 6 months until he was 2 so McBay could focus on her studies.

“Eventually, I believe, the long distance was a strain on the marriage and on motherhood,” said Ron McBay, who now lives in Atlanta. “Apparently, I began calling my grandmother ‘Mama,’ and I didn’t know who this other lady was.” That incident and the stress from being so far from her family prompted Shirley McBay to make a change. She transferred to the University of Georgia, where she boarded off campus with a Black family in Athens during the week, driving to Atlanta, where her husband lived with their two sons, Ron and Michael, every weekend.

By the time she set foot on campus, the university was technically integrated, having accepted Charlayne Hunter, Hamilton Holmes and Mary Frances Early three years earlier. But that didn’t mean everyone accepted the presence of Black students on campus.

McBay said she had a largely peaceful time in Athens living off campus, in an interview with fellow UGA grad Zerotti Woods for the American Mathematical Society article. And she described her adviser, Thomas Brahana, as being incredibly supportive.

For Woods, meeting McBay and writing an article on her journey offered an opportunity to honor a trailblazer who he believes made it possible for him to achieve his dreams—pursuing a master’s degree and doctorate in mathematics at the university.

“I could never explain to you how hard it is to be Black in math,” said Woods, now a mathematician at Johns Hopkins University. “And I could also never explain what it’s like to be a woman in math because I don’t have the personal experience of being a woman in math. So for her to be a Black woman and to get a Ph.D. in anything at UGA, much less math, she was like a superhero to me.” 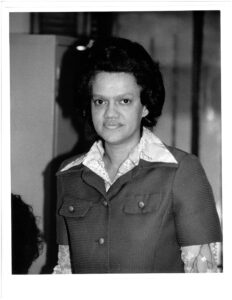 Shirley McBay didn’t set out to be a trailblazer when she began studying at the University of Georgia, but she paved the way for countless minority students interested in pursuing advanced degrees. (Courtesy of the Spelman College Archives)

McBay didn’t set out to be a trailblazer, she told Woods. She just wanted to make the most of her education, her career, her life.

She wanted that for others too. And she wanted to remove the hurdles she saw that might be in their way.

After 15 years at Spelman, where she and fellow pioneer Etta Zuber Falconer created a culture that propelled the college’s math and science programs to the top of rankings, McBay joined the National Science Foundation. She worked tirelessly to increase diversity in STEM fields.

In 1980, she took that commitment to the Massachusetts Institute of Technology, becoming the institution’s dean for student affairs. She had high standards for both her own job performance and for the students she supported.

“She was absolutely committed to taking care of students, working in their interests, and doing it diligently and extremely fairly,” said John Deutch, who served as provost at MIT during much of McBay’s tenure. She was particularly protective over records of students’ performance. The university would frequently receive inquiries into how minority students at MIT fared compared to their white counterparts, but McBay wouldn’t stand for it.

She felt publications of such records weren’t constructive. Whatever the results were could too easily be used to paint a positive or negative picture, depending on the intentions of the person requesting the information. “Both the president (of the university) and I admired her very greatly for her opinion,” Deutch said.

These students of the future will find it difficult to imagine the world of prejudice, crime and violence their parents and grandparents feared they might inherit. Their futures will be bright, for they will be well-disciplined, hard-working and eager to learn.” — Shirley McBay

During her time at MIT, McBay directed the university’s Quality Education for Minorities (QEM) Project, which was created in 1987 to determine ways to increase minority participation in higher education. The group’s findings showed a long way to go toward leveling the playing field, but McBay found reasons to hope.

“I can even imagine a time when all citizens will be able to participate fully in the American workforce, prospering from their growing skills and able to adapt to and improve upon the rapid changes in the workplace,” wrote McBay in her report Improving Education for Minorities.

“This will occur because all of our children—minority and majority alike—will have had access to a quality education throughout their lives. … These students of the future will find it difficult to imagine the world of prejudice, crime and violence their parents and grandparents feared they might inherit. Their futures will be bright, for they will be well-disciplined, hard-working and eager to learn. They will feel confident that they will be judged on the quality of their work—not on their ethnic background or the color of their skin.”

McBay spent three years working on the QEM project at MIT, and in 1990 she founded the QEM Network, a nonprofit based on the findings of the QEM project and its plan for improving the education of minority students in the U.S. As president of the network, McBay directed and provided leadership to countless STEM-focused projects. The organization helped find summer internship opportunities at places like NASA for high school and college students. QEM also gave seminars at minority institutions across the country to provide professional development opportunities for young faculty. One recurring topic at these seminars was how to improve the quality of grant proposals to the National Science Foundation, with the goal of increasing the number of grants awarded to underrepresented faculty and institutions. 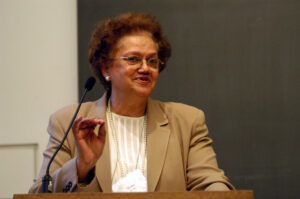 Shirley McBay speaks at an event at MIT in 2003.
(Courtesy of MIT)

She spent over 20 years with the organization, focused on furthering policies and programs to help minority and other underrepresented students succeed, writing columns, giving interviews and speeches, and championing the need for diversity in education.

McBay retired in 2016 and now lives in California with her son Michael. Younger son Ron encouraged her to write a book, something he said he laments not coming to fruition.

“I really felt that she had acquired an expertise that perhaps no one else had,” Ron McBay said. “In one person, she understood the issues facing Blacks, Hispanics, Native Americans, women and Appalachians and could compare and contrast the barriers each group faced in pursuing STEM education. At best, what you get is one person who is an expert in dealing with one group, but it’s rare for someone to have a bigger perspective on multiple groups.”

Her organization continues her legacy of advocacy from its base in Washington, D.C., today. The journey toward equitable and equal education for all didn’t end when she retired, and it certainly hasn’t ended now.

As McBay herself wrote in Issues in Science and Technology, “Fully developing the potential of almost a third of our population, closing the achievement gaps among racial and ethnic groups, and validating the worth of every American must be understood as critical to our national interest.”

And the way to do just that, McBay firmly believed, was by making quality education available to everyone.