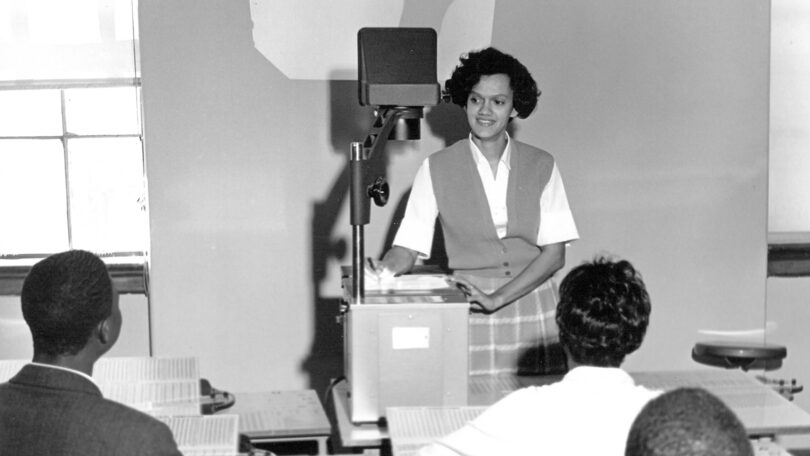 Shirley Mathis McBay was the first Black graduate to receive a Ph.D. from the University of Georgia.

Action taken by University Cabinet was approved by Board of Regents

At the request of University of Georgia President Jere W. Morehead, the University Cabinet voted unanimously to recommend that two facilities at the University of Georgia be named for some of the institution’s earliest and most distinguished African American graduates: the Science Library in memory of Shirley Mathis McBay, the first African American to earn a doctorate from UGA; and a new residence hall in honor of Harold A. Black, Mary Blackwell Diallo and Kerry Rushin Miller, the first African American students to enroll as freshmen and complete their undergraduate degrees.

The University System of Georgia Board of Regents approved the name changes on Dec. 7.

“Through these namings, we acknowledge the importance of these pioneers in the history of our institution,” said President Jere W. Morehead. “We celebrate their remarkable achievements and recognize the profoundly positive, lasting impact they have made on the University of Georgia.”

The University of Georgia received approval to name the Science Library as the Shirley Mathis McBay Science Library. McBay earned a doctorate in math from the university in 1966, after earning master’s degrees in math and chemistry from Atlanta University (now Clark Atlanta University). She began her career as a math professor at Spelman College, and then went on to become MIT’s dean for student affairs and chair of the National Science Foundation’s committee on equal opportunity in science and engineering. She later launched the Quality Education for Minorities Network (QEM), a nonprofit that she led for more than 20 years. McBay championed the need for diversity in the STEM fields throughout her life and was the subject of a Georgia Groundbreaker profile by the university earlier this year. She died on Nov. 27, 2021, at the age of 86. 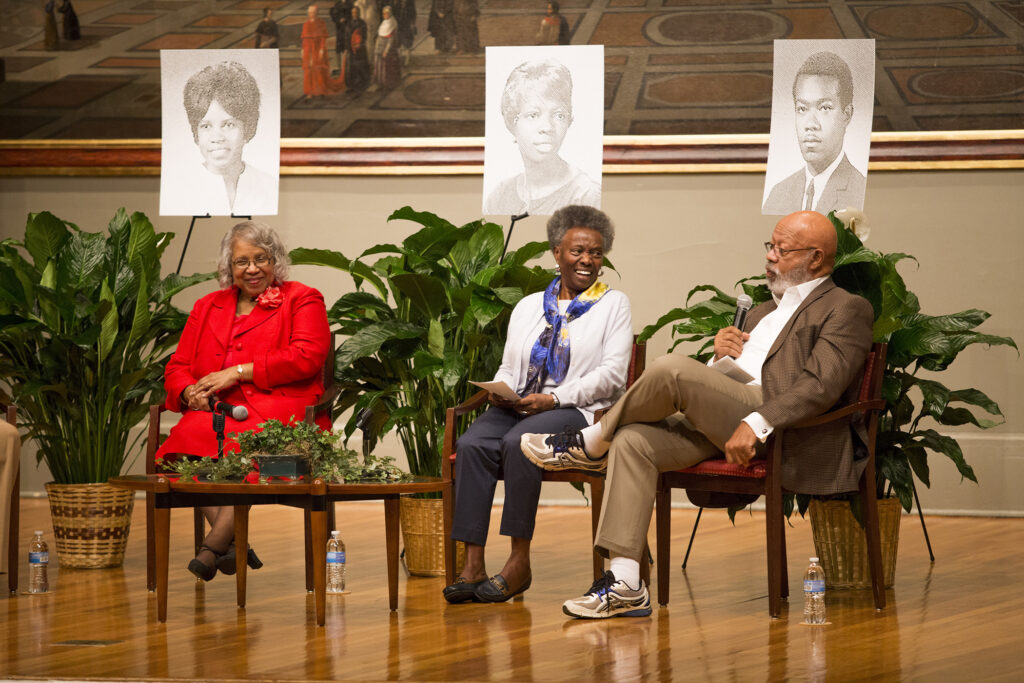 University of Georgia Alumni (L to R) Kerry Rushin Miller, Mary B. Diallo, and Harold A. Black, take part in a conversation on stage titled “Conversations with the Class of 1966: UGA’s First Black Freshman Graduates” in 2017 in the UGA Chapel. (UGA Photo)

The University of Georgia received approval to name the university’s newest residence hall, rising at the corner of Baxter Street and Cloverhurst Avenue, as Black-Diallo-Miller Hall. It will house 525 first-year students in double occupancy rooms beginning in fall 2022, the 60th anniversary of the year that Black, Diallo and Miller enrolled as freshmen. Construction of the five-story, $50 million project began last December.

Harold Alonza Black is the University’s first African American male freshman and the first African American graduate of the Terry College of Business. He retired as professor emeritus of the University of Tennessee – Knoxville after 24 years of service as the James F. Smith, Jr. Professor of Finance. Black, a native of Atlanta, earned his master’s and doctoral degrees from the Ohio State University. Through the years, he served on the faculties of American University, Howard University, the University of North Carolina, and the University of Florida. Over the course of his distinguished career, he has received numerous awards for his teaching and research, as well as honors from the U.S. Department of Treasury, National Credit Union, and the National Urban League. The Terry College has established the Dr. Harold A. Black Professorship at the Terry College of Business in his honor.

Mary Blackwell Diallo was the first African American student from Athens to enroll in the University of Georgia. She earned both her bachelor’s and master’s degrees in French literature from UGA and her doctorate from Emory University. She taught at Morehouse College and at Florida A&M University (FAMU), from which she retired earlier this year after a long and productive career. Diallo served as coordinator of language and study abroad programs and as an associate professor of French. She had previously served as president of FAMU’s faculty senate and as a member of the university’s board of trustees. She was a contract interpreter for the U.S. Department of State and participated in Fulbright Exchange Teacher Fellowships in Benin and France.

Kerry Rushin Miller was the first African American to earn a bachelor’s degree from the University of Georgia in mathematics in 1966 and shortly thereafter began an extensive professional career in the telecommunications industry. She retired from BellSouth after 29 years of distinguished service, primarily based in Charlotte, North Carolina. Miller was a participant in Leadership Charlotte and received numerous accolades for her service to the Charlotte community. She joined the Urban League of Central Carolinas, Inc., following her retirement from BellSouth, and later joined the Charlotte Club of the National Association of Negro Business and Professional Women’s Clubs (NANBPWC).  While with the Charlotte Club, she developed an award-winning education program designed to help at-risk elementary and middle school students raise their self-esteem, strive for excellence and achieve their personal best.

“It is a privilege to recognize the incredible contributions of these individuals,” said Michelle Cook, vice provost for diversity and inclusion and strategic university initiatives. “They were instrumental in paving the way for so many who have come behind them, and these namings will ensure that their stories are forever a part of our institution’s history.”

(Editor’s note: This story was updated to reflect the approval of the namings by the Board of Regents.)