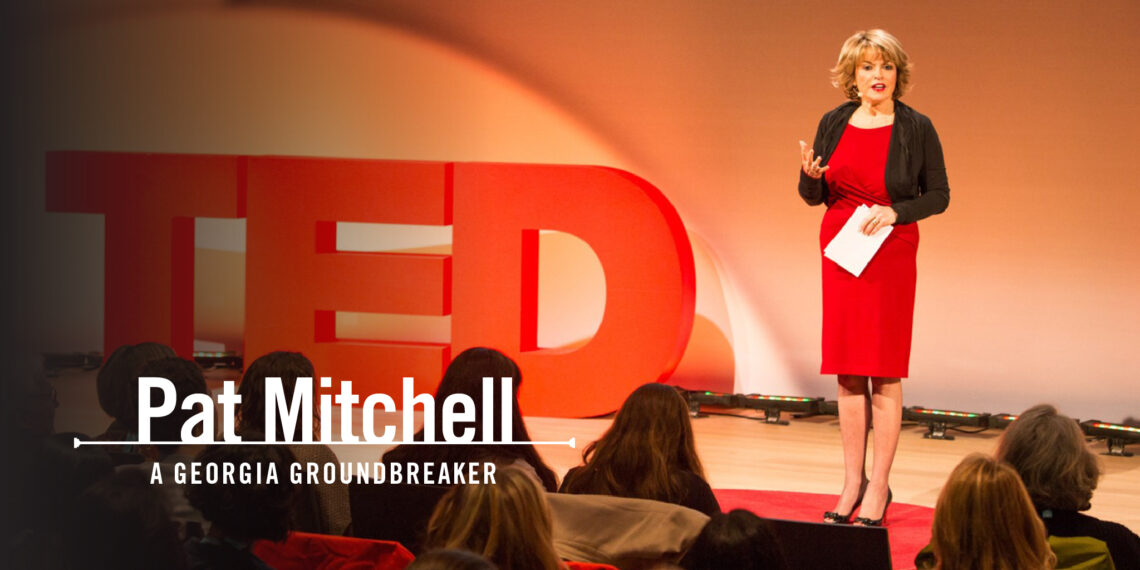 Pat Mitchell, a legendary media executive, producer and curator, connects women with opportunities to discover, grow and use their power to make the world a better place. (Photo courtesy Pat Mitchell) 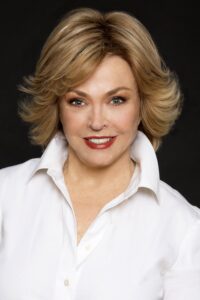 And Pat Mitchell wants you to know their stories.

“The most dangerous thing that we can do as women is support each other,” she said.

Mitchell, a legendary media executive, producer and curator, connects women with opportunities to discover, grow and use their power to make the world a better place. She’s doing that by making sure their stories are heard on every media platform.

She began by sharing those stories in magazines, then on television and now through blogs and other multimedia sources—stories that have earned 37 Emmy Awards and five Peabody Awards. In 2009, Mitchell was inducted into the Broadcasting and Cable Hall of Fame, and in 2012, the Women’s Media Center honored her with its first Lifetime Achievement Award. She is one of 12 Americans awarded the Bodley Medal from the Bodleian Library at Oxford University.

“I encourage all women, at any age, to become as dangerous as they need to be to create a better world,” said Mitchell, author of “Becoming a Dangerous Woman: Embracing Risk to Change the World.”

Her own story is an inspiration, too.

How it all began

Mitchell’s story starts in Swainsboro, Georgia. She wanted to attend the University of Georgia, but her father had reservations about sending her to such a large school. He told her that she could go if she earned a scholarship; otherwise she could attend a smaller women’s college. Mitchell’s high school English teacher, who Mitchell said was her big advocate, helped her secure an audition for a drama scholarship, which she received. She went on to receive both a bachelor’s degree (1965) and master’s degree (1967) in English literature from UGA.

Mitchell came to the university in the early 1960s, just as Hamilton Holmes and Charlayne Hunter-Gault became the first African American students to enroll in classes. In fact, Mitchell was dormmates with Hunter-Gault and saw firsthand the challenges she faced.

“It was a tumultuous time because there was so much change going on, and it was also, at UGA, a community,” she said.

Mitchell thought teaching would be her career and began her professional life as an English instructor at UGA and then Virginia Commonwealth University.

Mitchell maintains a close connection with the university—she’s had children and grandchildren also graduate with degrees from UGA. 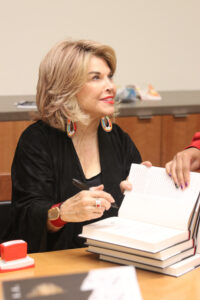 Pat Mitchell shared her own story—and stories from other women—in her book “Becoming a Dangerous Woman: Embracing Risk to Change the World.” She signed copies of the memoir during an event at the Special Collections Libraries in 2019. (Photo by Sarah Freeman)

During her time at UGA, Mitchell took a couple of journalism classes. As she continued to teach her students, she became more and more interested in the media’s coverage of the civil rights movement and the women’s movement.

“The idea of being able to be a reporter of what was going on—to write about it, to be a part of it and to be on the front lines, as well,” led Mitchell to write a freelance article about student movements. That story caught the eye of the editor at Look, a biweekly news magazine—and launched her journalism career.

“What a great start to be on the front lines of so many great movements going on in our country and to be there with the perspective of a writer,” she said.

Life changed for Mitchell in 1971. Look went out of business, and Mitchell went through a divorce. At the time, television stations were beginning to bring more women into their newsrooms, and after several auditions, she landed a position at WBZ in Boston as a full-time television reporter.

“And the rest, as they say, is history,” she said. “And it was history-making during that time. Every move you made as a woman—you were either the first or the only. Every story, every assignment, every room where decisions were made—every one of those was an opportunity to break new ground.” 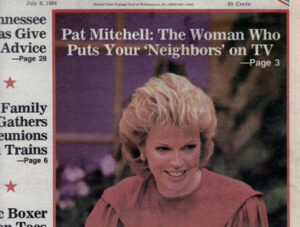 Pat Mitchell during her time with “Woman to Woman,” the first national program produced and hosted by a woman. (Photo courtesy Pat Mitchell)

Her career in network television spanned from reporter to correspondent to anchor to talk show host, in addition to producer and executive. She started her own independent production company in the mid-1980s and created, produced and hosted the Emmy Award-winning daytime series “Woman to Woman,” which was the first national program produced and hosted by a woman.

“Pat Mitchell is a force of nature, a lifelong advocate for women, a journalist of great import and a strong friend of UGA,” said Charles N. Davis, dean of the Grady College of Journalism and Mass Communication. “Her work and her service have long been dedicated to lifting the voices of voiceless, empowering those without power and finding joy in everyday living. She’s brought reflected glory to the university in countless ways.”

“You can’t succeed if you’re not willing to take a risk,” she said. “In every challenge, there is an opportunity. I wanted to see the world and explore the world and give back to the world.” 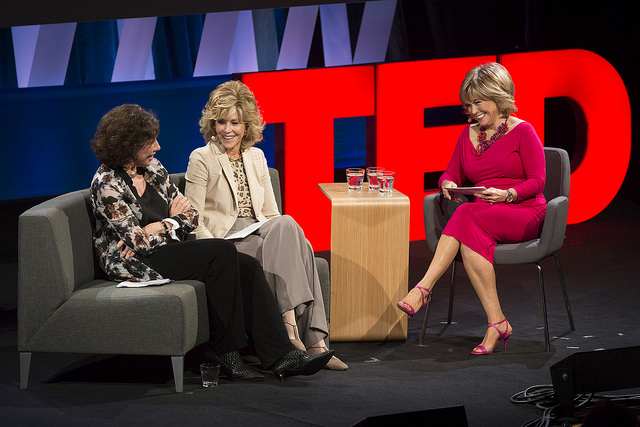 Now, Mitchell focuses on new ways to share stories as the editorial director of TEDWomen and host of the “Dangerous Women: Leading Onward” interview series on FINTECH.TV.

“My career is definitely not a straight line. It’s characterized by these little branches where I went off to pursue things that I wanted to do,” she said. “But through it all, whether it was in television or print or starting TEDWomen or creating the Connected Women Leaders cohort I’m working with now, all of the work is unified by one central lens. You can look at all of it through the frame of a commitment to telling women’s stories, elevating women’s ideas and empowering other women.”

Much of that desire to shine a spotlight on women’s stories came from a passion to share her own in the hope that other women could see themselves in it. As she encountered similar and unique stories through her work, it became even more important to share them so that they, too, could be a reflection. 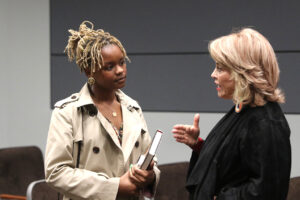 Pat Mitchell, right, talks with an attendee at a book signing and discussion at the Special Collections Libraries in 2019. (Photo by Sarah Freeman)

By encouraging women to use their voices, Mitchell believes we’re creating a better place.

“I’m a great believer in the leadership of women to make a difference,” she said. “When we bring the best of ourselves and the best of men together, that’s what is going to change the world.”

Mitchell encourages women to optimize the best of their feminine values—the ability to nurture, to lean on their intuition, to look for and build consensus—and bring them to the table. That leads to asking important questions, thinking in long-term goals and, ultimately, creating longer-lasting impact.

She is working toward that change now through Connected Women Leaders, which includes leaders of countries, companies, nonprofits and educational institutions. Mitchell helped bring the group together with assistance from the Rockefeller Foundation, and they get together four to five times each year to take on global challenges in the priority areas of climate, food security, health and feminist activism. 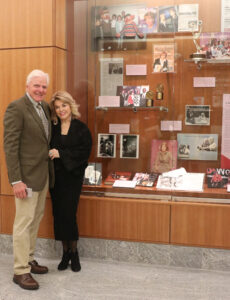 Pat Mitchell, right, and her husband, Scott Seydel, look at an exhibition of her memorabilia at the Special Collections Libraries in 2019. (Photo by Sarah Freeman)

Mitchell’s philanthropic efforts go far beyond that group. She is chair emerita of the Sundance Institute and the Women’s Media Center, as well as founding board member of V-Day, a global movement to end violence, and a founding member of Green Cross International. She’s also a member of the Council on Foreign Relations, the International Academy of Television Arts and Sciences and the International Women’s Forum.

Mitchell said she’s most fulfilled by “feeling like I have done something good for someone else, for my family, for the world.”

The key to her success on- and off-screen may stem from something her grandmother told her as 3-year-old who still stumbled around: “Honey, falling on your face is at least a forward movement.” And she continues to encourage those behind her to move forward by taking risks and putting themselves out there.

“I’m seeing, sensing and feeling a kind of fragility worldwide that is going to need a new level of passionate, committed, courageous and, yes, dangerous women and men stepping up, speaking up and showing up,” she said.