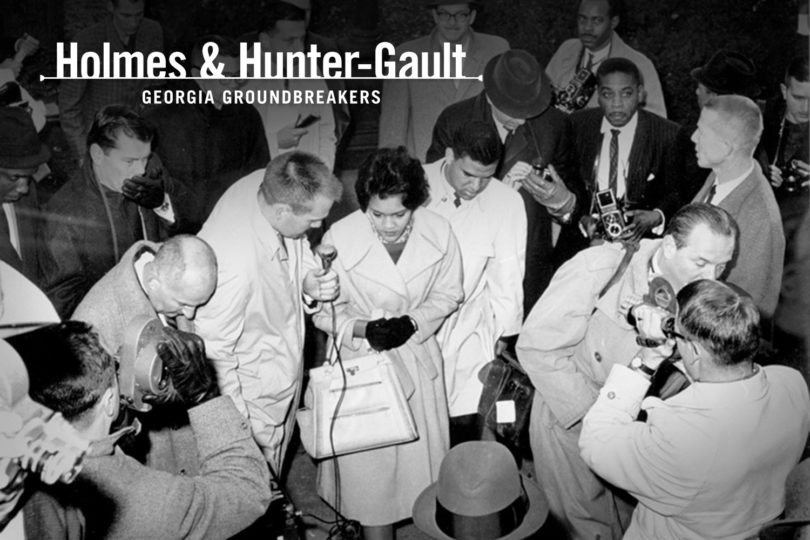 Charlayne Hunter and Hamilton Holmes are greeted by the press as they walk toward the Admissions Office in the Academic Building on Jan. 9, 1961, to enroll as the first African American students at UGA.

Both agreed that the University of Georgia had the classes they needed to reach those goals. But when they graduated from Henry McNeal Turner High School in Atlanta in 1959—Holmes as valedictorian and Hunter (now Hunter-Gault) as third in their class—it wasn’t quite that simple.

“Pursue your dreams—whatever it takes. Don’t give up despite what might be in your way,” Hunter-Gault said in a recent interview. “It was our determination—mine and Hamilton’s—to follow our dreams at the place that was best suited to help us fulfill them.” 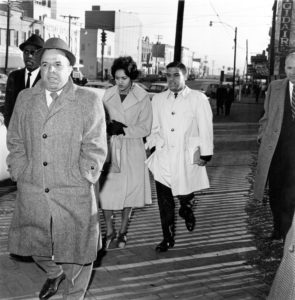 Charlayne Hunter and Hamilton Holmes walk up Broad Street in Athens on Jan. 9, 1961, to enter the UGA campus to become the first African Americans to attend the university.

Eventually Hunter and Holmes became the first African American students to attend UGA, but that is just the beginning of their stories. Both went on to have a lasting impact in their chosen career fields and on generations of students.

Their latest legacy: a new endowment, launched by Hunter-Gault and her husband, that inspires UGA students to pursue a more just society.

Both Hunter and Holmes applied to UGA for the fall 1959 quarter but were denied. Holmes was accepted to Morehouse College, and Hunter enrolled at Wayne State University in Detroit, but they continued to submit applications to UGA each quarter.

“You can’t ever take your eyes off the prizes of freedom, justice and equality,” she said.

In September 1960, their legal team filed for an injunction seeking to prohibit UGA from “refusing to consider [Holmes’ and Hunter’s] applications and those of other Negro residents of Georgia for admission to the University.” Their request was refused, but a full trial was later held in Athens in December 1960.

On Jan. 6, 1961, Judge William Bootle issued his ruling, stating that Holmes and Hunter “would have already been admitted had it not been for their race and color,” and they were immediately admitted to UGA. Three days later, they became the first African American students to enroll in classes.

Their first steps into the Academic Building left a lasting footprint on the UGA landscape.

That same building now bears their names. It was renamed the Holmes-Hunter Academic Building in their honor to mark the 40th anniversary of UGA’s desegregation. And as part of UGA’s bicentennial in 1985, the university created the annual Holmes-Hunter Lecture, which is sponsored by the Office of the President and focuses on race relations, civil rights and education.

Their influence was felt early on during their time in Athens. Mary Frances Early, a fellow Turner High alumna who knew both Holmes and Hunter, was so inspired by what she saw that she decided to transfer from the University of Michigan to UGA to help them integrate the university. In August 1962, Early became the first African American to graduate from UGA. 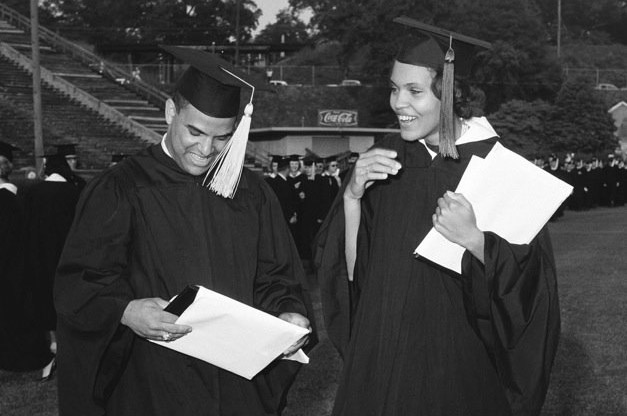 Hamilton Holmes and Charlayne Hunter after they received their diplomas from UGA.

A year later, it was Holmes’ and Hunter’s turn to walk across the stage.

In the fall of 1963, Holmes became the first African American student admitted to the Emory University School of Medicine. After starting a residency at Detroit General Hospital and serving in the military, he returned to Emory to complete his residency. Later, he became an assistant professor of orthopedics and served as an associate dean at Emory.

In addition, Holmes worked as chief of orthopedics at the Veterans Administration hospital in Atlanta, opened a private practice and became medical director and eventually head of orthopedic surgery at Grady Memorial Hospital. 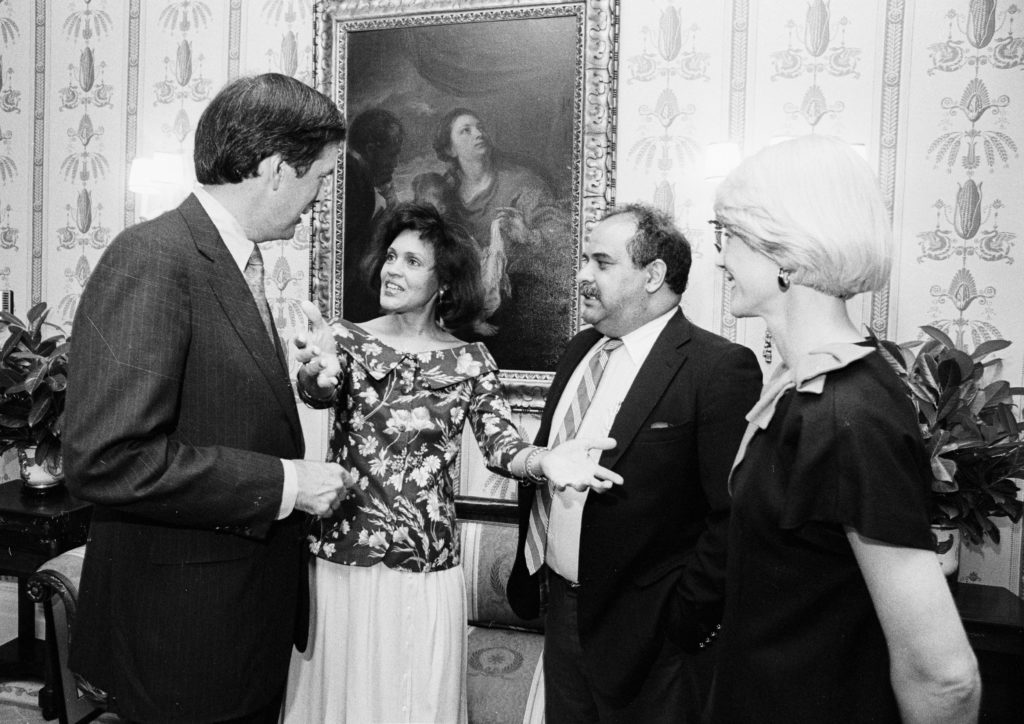 Charlayne Hunter-Gault and Hamilton Holmes talk with then-President Charles Knapp and his wife, Lynne, during Commencement ceremonies in 1988. (UGA photo)

As Holmes Jr. pointed out, the path toward their degrees wasn’t always smooth.

On Jan. 11, 1961, two days after they registered for classes, a crowd gathered outside Hunter’s dorm after a basketball game, smashing windows with bottles and bricks. Holmes and Hunter were suspended, and the Georgia State Patrol escorted them back to their homes in Atlanta that night. A new court order was issued, and they returned to campus and resumed their classes. 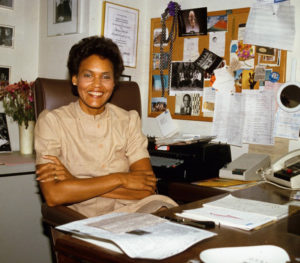 Charlayne Hunter-Gault in her office at the PBS “MacNeil/Lehrer Report” in 1983.

After Hunter’s graduation in 1963, she took a job as an editorial assistant at The New Yorker, where she eventually became the first African American staff writer. She then worked as a television reporter and evening anchor for the local NBC station in Washington, D.C. She returned to print media in 1968, establishing The New York Times’ Harlem bureau. From 1978 until 1997, she worked for the MacNeil/Lehrer Report, which became PBS NewsHour. In 1997, she became chief correspondent in Africa for National Public Radio. She left NPR in 1999 to join CNN, where she served as bureau chief and correspondent, based in Johannesburg, South Africa, until 2005.

“The view of the world that I developed and refined as a student at UGA helped me become a successful journalist and person,” Hunter-Gault said. 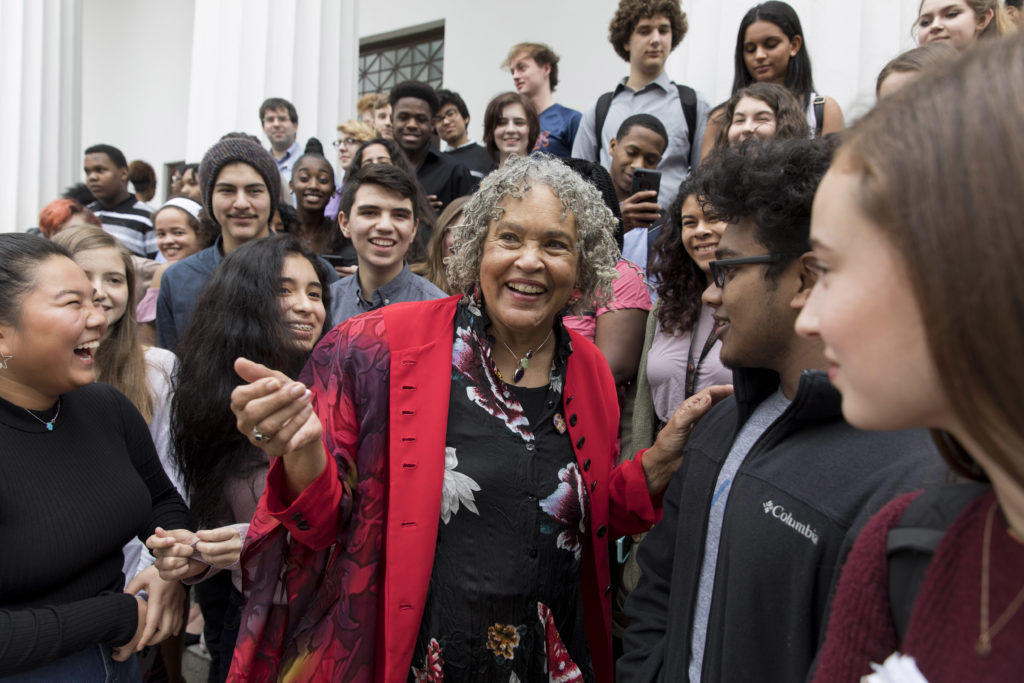 Charlayne Hunter-Gault meets with students from Cedar Shoals and Clarke Central high schools outside of the Chapel before delivering the Holmes-Hunter Lecture in February 2018. (Photo by Andrew Davis Tucker/UGA)

But for both Holmes and Hunter, their legacies go far beyond their time at UGA and their distinguished careers.

“I’m calling for a coalition of generations so that the things that were important achievements in my generation are looked at so that they can be built upon in the next generation,” Hunter-Gault said.

Giving Voice to the Voiceless

At the 2018 Holmes-Hunter Lecture, Hunter-Gault passed the proverbial baton to the next generation.

“It’s truly time for every citizen, no matter your age, to get woke,” she told the crowd. “And that means helping keep our democracy safe, and it means doing the hard work of digging for good information with a variety of sources.”

She spoke about her time at UGA and what students today can learn from it.

“I want to share a little of my life with you today in the hope that you will be inspired, or further inspired, to make sure that your armor is fitted and polished so that you can help bind wounds and defeat the kind of divisions that are tearing at the fabric of our nation,” she said to those in attendance, including members of Holmes’ family.

To that end, she and her husband, Ronald Gault, started the Giving Voice to the Voiceless endowment, which provides grants to university students to promote social justice and global understanding.

“I wanted to do something that would help inspire young people,” she said.

Charlayne Hunter-Gault took the opportunity to ring the Chapel bell, a campus tradition, after delivering the Holmes-Hunter Lecture in February 2018. (Photo by Dorothy Kozlowski/UGA)

The first grant recipients were announced recently, and their projects reflect Hunter-Gault’s legacy of courage, bravery and fearlessness.

Abha Rai, a doctoral candidate in the School of Social Work, received a grant to study domestic violence within South Asian immigrant communities.

“I want to be that voice for my community. I want to understand domestic violence and maybe even someday help end domestic violence,” she said. “This project is the perfect opportunity for my own voice to be heard in an area of research where people are understudied and not much is known about them.”

Steve Armour, an archivist with the University Libraries, received a grant to create an oral history with African American alumni who attended the university in the late 1960s and early 1970s. The interviewer for the project will be a student who will conduct background research on what that time was like at UGA in order to develop the right questions.

“These are students who attended UGA in the years following the desegregation of the university,” Armour said. “We often hear about the experience of Charlayne Hunter-Gault and Hamilton Holmes, but there are generations of students who followed them that this project is going to focus on.”

For Armour, it’s about continuing the conversation.

“They [Holmes and Hunter-Gault] reached these amazing heights that I think in turn have inspired subsequent generations,” he said. 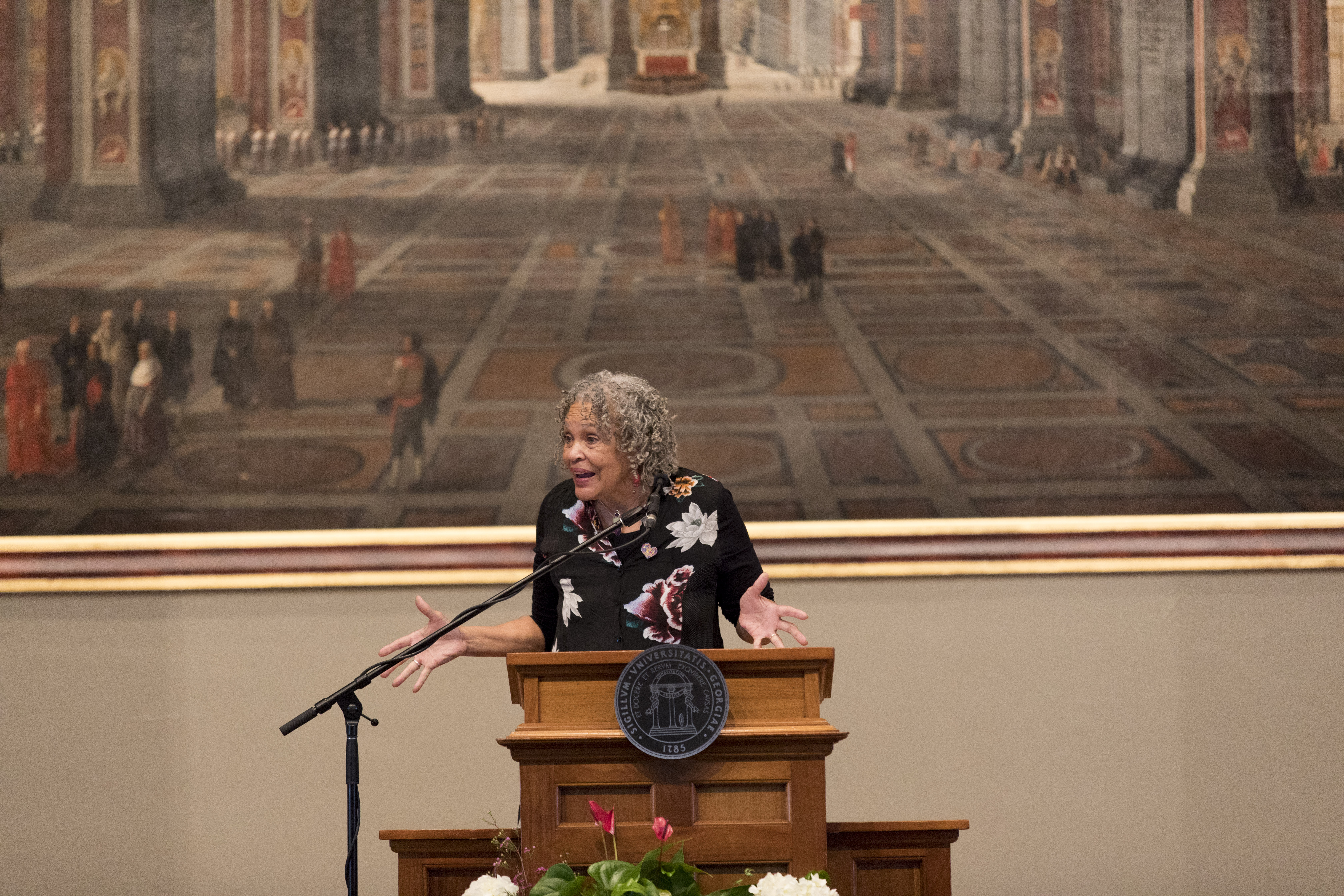 Charlayne Hunter-Gault delivers the Holmes-Hunter Lecture in the Chapel in February 2018. (Photo by Andrew Davis Tucker/UGA)

Kyla Brinkley, who graduated with degrees in public relations and English in May 2018, continues to feel Hunter-Gault’s impact.

“Charlayne Hunter-Gault is a prime example of black excellence and what you can do to have an impact on people around you,” she said. “The fact that she still chooses to give back to students at UGA and continues to fuel minority students to pursue the things that she was able to pursue is really powerful.”

Brinkley was the first Charlayne Hunter-Gault Intern for Chess and Community, a nonprofit organization dedicated to empowering youth.

“They are the giants, now, on whose shoulders the next generations will stand,” she said. “Even though they are quite young, they’ve demonstrated that they have a consciousness about the values in our democratic promise. Everywhere I look, I see them working to ensure that.”