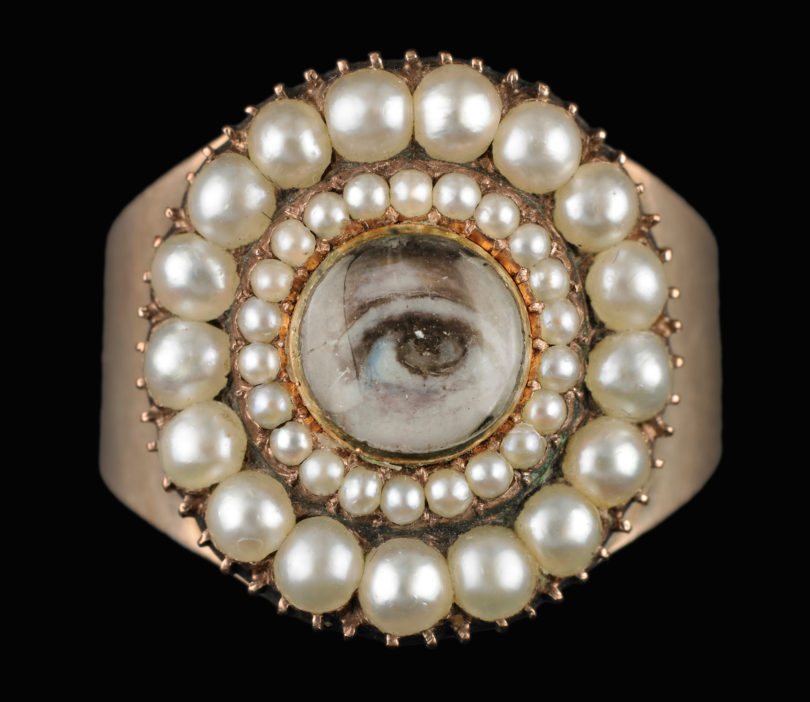 The Look of Love: Eye Miniatures from the Skier Collection is on display at the Georgia Museum of Art until Jan. 6. Organized by the Birmingham Museum of Art, the show is the first major exhibition on the little-known subject of lover’s eye jewelry and makes use of an iPad app to enhance visitors’ experience of the works of art.

The exhibition looks at the exquisite craftsmanship of small-scale portraits of individual eyes set into various forms of jewelry from late 18th- and early 19th-century England. In addition to the skilled artistry with which each of the tiny
portraits was painted are stories of secret romance and loves lost.

In 1784, the Prince of Wales (later George IV) secretly proposed to a Catholic commoner and widow named Maria Fitzherbert. Because it was highly unlikely that his father, King George III, would agree to the marriage, Fitzherbert initially rejected the prince’s proposal and fled to the continent. Despite their yearlong separation, the prince proposed a second time, sending Fitzherbert a picture of his own eye in place of an engagement ring. The prince’s romantic gesture inspired an aristocratic trend for exchanging eye portraits in a variety of settings, including brooches, lockets, rings and toothpick cases.

Because the eye might only be recognized by people of the most intimate familiarity, these customized tokens were largely commissioned by clandestine lovers whose relationships were viewed as illicit or subject to misunderstanding.

“Visitors can marvel at the virtuosity of miniature painting and get a rare glimpse of private life in a different period of time,” said Dale Couch, curator of decorative arts and the in-house curator for the exhibition.

The exhibition is accompanied by an iPad app created by the Birmingham Museum of Art. Visitors to the museum will be able to check out an iPad for free to use the app while visiting the exhibition. Because these works are so small and are exhibited in cases, the app magnifies them and allows the viewer to see them from multiple angles in videos. It also provides insight on each work with informative text.

The collection from which the exhibition is drawn, assembled by David and Nan Skier, is the largest in the world and contains more than
100 objects, both decorative and functional, from simple lockets to lavish rings, each of which features an eye miniature. Although the majority of the works were meant to be worn as jewelry, some were intended to be carried in the form of small boxes.