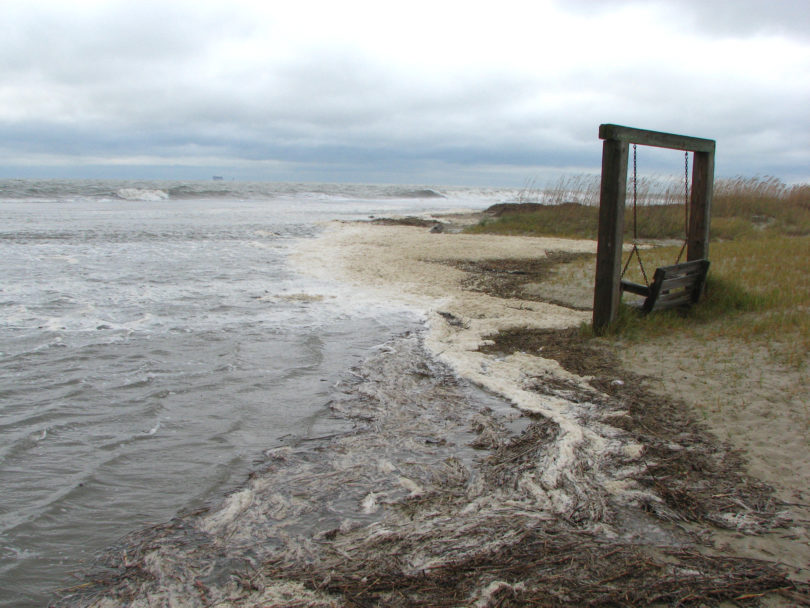 The SOPA award recognizes superior leadership, teamwork and accomplishment by Sea Grant extension personnel engaged in an exceptional outreach program. It was presented to Georgia Sea Grant and its partners UGA Marine Extension, Carl Vinson Institute of Government, College of Environment and Design and Lamar Dodd School of Art at a reception Sept. 11 during the annual Sea Grant Week national conference in Clearwater, Florida.

“Throughout the development of the Sea Level Rise Adaptation Plan, stakeholders have been engaged through town hall meetings, Web postings and presentations at city council meetings, and the response has been both enthusiastic and encouraging,” Tybee Island Mayor Jason Buelterman said in his letter of recommendation for the award. “As residents of a barrier island on the front lines of sea level rise, we have all become more attuned to the reality of what is happening and the need to act quickly to protect our community for future generations.”

Although the project is ongoing, the work with Tybee Island is already serving as a model for other coastal communities throughout the South, including St. Marys, Georgia; Hyde County, North Carolina; Monroe County, Florida; and the City of Islamorada, Florida.

More than 3,000 people, including 70 graduate students, have been reached through this project, including Sen. Sheldon Whitehouse from Rhode Island, who visited Tybee during his Southeast Climate Road Trip and applauded Tybee Island’s efforts on the Senate floor. In 2013, Tybee Island and Chatham County won the Four for the Future award from Georgia Trend Magazine and UGA Public Service and Outreach for their sea level rise planning efforts.

Public participation continues to play a key role in this project, which should be completed in early 2015, when Georgia Sea Grant and its planning partners will present the final adaptation plan to Tybee Island’s City Council for approval.

Georgia Sea Grant and the University of Georgia Marine Extension, units of Public Service and Outreach at the University of Georgia, conduct outreach, education and research on the Georgia coast to enhance coastal environmental, social and economic sustainability. UGA is a land- and sea-grant institution. For more information, see http://georgiaseagrant.uga.edu/.

Note to editors: Images of Tybee Island are available at the following URLs.